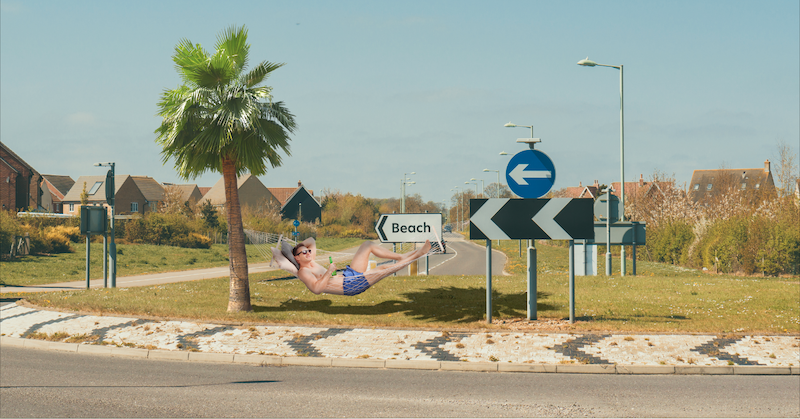 From the absurd to the even more absurd, here are our top eight extreme airport hacks to add a bit of spice to the start of your trip (with some advice on how badly it'll mess up your trip if you actually try them, as well as some hassle-free alternatives).

You know you can't take normal bottles of liquids onto the plane right? You have to take little bottles of toiletries in a see-through bag, which is a faff and a waste and costs more than the normal ones.

Skip all that. Get a big, empty shampoo bottle from home. Clean it very thoroughly, then before you set off to the airport fill it with yoghurt and stick it in your hand luggage. If security are doing their job, they'll spot your oversized bottle and tell you to throw it away. Don't throw it away. Drink it in front of them. Even people with machine-guns don't bother you much once they've watched you down a bottle of shampoo with a smile.

Fun power move, breaks up the tedium of the queue.

There's no rule against drinking yoghurt in a silly way so what are they really going to do to you?

Order your holiday toiletries in advance from the airport pharmacy (Boots generally works) and pick them up once you're through security.

Luggage rules, especially on the budget airlines, are pretty much deliberately restrictive and confusing so they can charge you extra for bringing anything on holiday with you. Fair play, some might say, they're businesses trying to make money. Unless you're willing spend a week in Spain with just a face cloth and one pair of speedos, that super-cheap plane ticket is going to clock up extras when you check in.

Enter the big coat with lots of big pockets. There are limits on how big your bags can be, and how many of them you can take. There's nothing stopping you wearing a floor-length trenchcoat onto the plane and stuffing the pockets with a bag's worth of clothes, putting all your gadgets and heavy items inside, or boarding your plane wearing most of your wardrobe for the trip in layers.

Makes a budget flight actually budget by evading one of their hidden costs.

We can't find an airline that forbids layering clothes (though Samoa Airlines charges by the combined weight of passenger plus luggage so this won't work in Samoa). If you do it in summer you might faint though so don't overdo it.

12 games to scratch your travel itch

Have a good time without even getting on a plane

The chairs in Departures are famously uncomfortable, and if your flight is delayed you could find yourself sitting there for a good old while.

This summer, one traveller passing through Seattle-Tacoma airport solved this by pitching his hammock in departures, attaching the ropes to two of the airport's supporting pillars. You'd think the TSA, infamous sticklers for the letter of US airport rules, would put a quick stop to it – but for once they took a relaxed view, saying it was up to airports whether passengers could pitch hammocks in the terminal.

Really comfy, and you'll make friends if you're willing to share.

UK airports might not like you pitching a hammock in the terminal, and you'll have to get it on the plane as luggage after you're asked to take it down.

Book an airport lounge. They're comfier than a hammock, come with free snacks and drinks and start from £15pp.

You're normally allowed one carry-on bag for the plane, but you can also carry your shopping through. So buy something tiny from Duty Free, ask for a bag, then stuff all the remaining space with your spare t-shirts and shoes so you can get it on the plane for free.

(How did you get all those t-shirts through security and as far as the Duty Free shop? They were in your big coat. Keep up.)

Limits the stuff you can buy on the way out, but you can pick it up on the way back.

5. Print your face on your suitcase

Tired of searching through hundreds of identical black suitcases as they go round and round the conveyor? Worried you might not be able to ID your bags if they go missing? It's surprisingly cheap to get a huge photo of your face printed on your luggage instead.

Conversation starter, and you'll never lose your luggage again. (After all, what's the resale value of a suitcase with your face on?)

Nope, we got nothing. It's all upside on this one.

Invest in an AirTag, a Tile or any other RFID tracker and stick it on your bags so you can't lose them.

OK, final luggage hack. And we mean pack a pillow, not just carry one. Budget airlines let you bring a pillow on the plane. But what if it was a pillowcase with a zip and all your clothes inside? The airlines don't have any rules against it – airline staff who've commented say no-one's going to stop you – and there are plenty of people on TikTok filming themselves getting away with it.

Lumpy pillow. If you're going a long way a real pillow might be more important. And if the airlines decide there's some small print forbidding it, you've got to pay to stow a pillow as hold luggage.

7. Zip through departures on a scootcase

If you've ever been jealous of the infants wheeling around departures on their little Trunkis – and who hasn't? – all is not lost. Grown-ups, assuming you're willing to stretch the term a bit, can join in too.

Sure, you can put all your clothes in a wheelie suitcase or a backpack then carry it like a chump. Or you can invest in a scootcase and travel not just with but on your luggage. What's a scootcase? A scooter-plus-suitcase of course, that folds up into a bag or folds down into a (slightly precarious) mode of transport.

Easier and much more fun than walking.

Are you really allowed to ride a scooter around an airport? Really? Only one way to find out. That announcement coming over the tannoy is just for you though, and that's a special start to your holiday right there.

If you're in that much of a hurry to get through the airport, drive up the night before your flight and stay in an airport hotel next to the terminal. Park, sleep and then roll onto your plane the next morning fresh and ready to enjoy your trip.

The rule for going through security is no liquids (above a certain size per container yadda yadda, see above). Ice isn't a liquid. So freeze all your liquids and take them through solid.

Shampoo freezes. Sunblock freezes (eventually). Water definitely freezes. So freeze your liquids the night before and get them through that way.

It's not without its risks. Security may not like it, and if your frozen liquids have thawed even a bit, technically they can make you throw them away (because of the max 100ml bottle rule). But people have made it through with their liquids frozen before, and if you want to save a few pounds and have a bit of fun in the queue, the worst that'll likely happen is being made to throw them out.

Security: "No liquids on the plane, everyone knows that"

Security: "But it'll become a liquid if it melts"

You: "Yes, that's what 'melt' means. It's literally true of every object in the universe"

Security: "Snd it'll become a liquid eventually, especially if it gets hotter"

You: "Also true of everything in the universe"

Security: "I guess we'll just wait here and see what happens to it then"

You: "While we wait, do you mind if I drink this shampoo?"