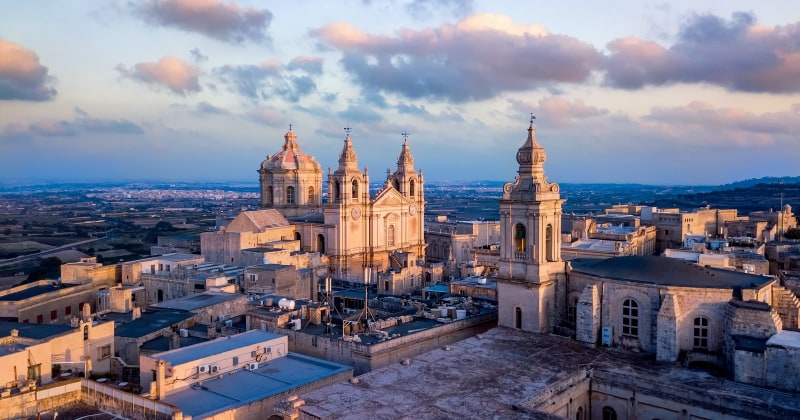 With more than 7,000 years of history and some of the oldest ruins in the world, Malta is filled to bursting with fascinating things to do and learn, and eye-poppingly beautiful things to see, from historic cities to blissful lagoons.

Top things to do in Malta

Where to stay in Malta

Where to eat in Malta


What time is it in Malta?

What currency do they use in Malta?

What language do they speak in Malta?

What power adapter do you need for Malta?

How long is the flight to Malta?

The country of Malta is made up of a group of small islands, and only the three largest – Malta, Gozo and Comino – are populated. The islands lie in the geographical heart of the Mediterranean, making it a strategic naval and commercial hub for thousands of years.

Malta has been occupied by many cultures over the course of its history, including ancient Greeks and Romans, as well as the French and later the British. It achieved independence in 1964 and went on to join the EU in 2004.

Malta boasts an impressive 3,000 hours of sunshine every year to accompany its hot summers and mild Mediterranean winters.

The temperature rarely drops to single figures even in the middle of winter, although it does get quite nippy at night and this can continue into spring – so bring an extra layer if you're travelling at this time of year.

Late spring brings warmer temperatures and plenty of sunshine, but not the crowds that flock to the island in the summer months – when the temperature can reach upwards of 30C.

The currency in Malta is the euro. A tip of 5-10% is customary for good service, although always be sure to check a service charge hasn't already been added to your bill.

What language to they speak in Malta?

Malta has two official languages – Maltese and English. The locals prefer to speak Maltese as, being a particularly unique European language because of its Arabic origins, it forms part of their national identity. English is spoken fluently by much of the population though, so you probably won't encounter many language barriers.

If you do though, here are some simple Maltese phrases to get you started:

Malta has one airport, close to the capital Valletta. It's easy to reach Malta by air, with direct flights from the UK taking around 3 and a half hours.

What are the best ways to travel around Malta?

Getting around the islands can be pretty easy if you know how, with regular buses and ferries. Or you can always hire a car.

It's easy to hire a car in Malta, and it's a great option for getting around thanks to the flexibility it offers you. Plus they drive on the left in Malta so it's easy getting used to driving there.

Driving can be a challenge depending on where you go – expect narrow roads and not much parking in the old parts of towns and cities as well as rural areas. The island doesn't have any motorways, but most of the main roads are dual carriageways.

Malta has a very efficient bus network that connects the airport and cruise terminals to most major cities, resorts and attractions.

You can buy tickets from the driver, with either cash or contactless payments, or you can save some money with a travel card. There's a choice of cards available, which include unlimited travel from one day up to 12. Some even include travel on the ferry to and from Gozo. You can buy travel cards at any information office or ticket station.

It's easy to plan your journey too, either from the timetables online, or the app which provides real-time updates so you know how long you can expect to wait for the next bus.

If you're planning on visiting Gozo or the smaller island of Comino you'll need to take a ferry. It takes around 20 minutes to reach Gozo from the terminal at Cirkewwa, and there's a new service from Valletta which takes about 45 minutes.

If you want to reach Comino the ferry takes around 25 minutes, and you can board it from Cirkewwa, or Mgarr harbour on Gozo.

Malta Airport Transfer prices from under £5 and FREE cancellations up to 3 days before departure.

Pre-book your Malta car hire, with prices starting from just £12.54 per day with FREE cancellations*

Top places to visit in Malta

Valletta was founded in 1566 by the Knights of St John, who relocated to the island to defend it from pirates and the Ottoman Empire. It was built after the Great Siege of 1565 in which the 700 knights as well 8,000 soldiers managed to defend the island from an Ottoman invasion force of 40,000! Many of the original fortifications were destroyed and so a new fortified capital, Valletta, was built.

This beautiful city is a UNESCO World Heritage Site thanks to its gorgeous architecture and rich history. As you explore you'll discover the St John's Co-Cathedral, the Grandmaster's Palace where the head of the Knights of St John once resided, and the National Museum of Fine Art. There's a lovely square in the centre too, filled with charming boutiques and cafes.

Known as 'The Silent City' Mdina is a fortified city in northern Malta which served as the countries captial up until the medieval period. Much like Valletta the varied history is evident in the architecture of the city, from medieval to Baroque. Highlights include the Baroque Cathederal and the Mdina Gate, the main entrance to the city.

You can also explore the roman ruins and catacombs or visit the Mdina Dungeons Museum to get a feel for life under medieval rule.

Mosta is a growing city found in northern central Malta - and it is mostly famously known for Sanctuary Basilica of the Assumption of Our Lady. Or as it's more commonly known, the Mosta Dome. The Motsa Dome is one of the largest unsupported domes in the world, it took nearly 27 years to finish and it was built by voulnteer labour from the parish.

During WW2 Malta was heavily bombed, and you can see a replica of a bomb that hit the dome in 1942 - it failed to explode and the detonator was removed.

Where to stay in Malta

Like many islands in the Mediterranean, Malta has a decent combination of resorts providing historical attractions, lively nightlife, and beachside bliss. Here is our pick of the bunch…

St Julian's is one part traditional seaside town and one part modern holiday resort - a popular destination for tourists all year round. There's a great choice of hotels to suit every budget and useful travel connections to the rest of the island too.

St Julian's is also home to Paceville, the lively heart of the resort's nightlife, filled with plenty of bars and nightclubs and even a casino.

Sliema is a popular resort that lies just across the harbour from Valletta. It has a number of historical attractions as well as a lengthy promenade that runs for 10km all the way to the neighbouring resort of St Julian's.

What makes Sliema an ideal holiday location, along with its affordable hotels and apartments, is its convenient location between Valletta and St Julian's, allowing you to easily combine the cultural heritage of one with the lively nightlife of the other.

If you're looking for a beach holiday then Mellieha is probably the best place for it in Malta. While the island isn't known for its beaches, Mellieha and its scenic bay are home to Malta's biggest sandy beach.

While the beach is very popular and often quite busy, especially in summer, the resort itself is actually quite quaint and peaceful. It's a lovely place to explore and offers a glimpse into traditional Maltese village life.

What to eat in Malta

Malta has no shortage of unique delicacies to try while you're there, thanks to the many cultures that have occupied the islands across their history.

One favourite is bragioli, or beef olives. They aren't olives at all in fact, but thin strips of steak wrapped around a filling (usually bacon, breadcrumbs and seasoning) and braised in red wine. Or you could try rabbit stew which is a local staple, or kapunata – a Maltese variation of ratatouille.

If you're a fan of seafood then visit Marsaxlokk on Sunday mornings for the fish market, where you can try aljotta (Maltese fish soup) and rich pasta sauces made with squid and octopus.

For something sweet try kannoli (fried pastry tubes filled with sweet ricotta cheese) or helwa tat-tork, a kind of fudge made with tahini.

If you're visiting Malta you should absolutely spend some time on the smaller islands of Gozo and Comino which, while part of Malta, have their own unique identities.

Gozo has many of the islands' best attractions, including the Inland Sea and the medieval Citadel. Its small size and stunning natural scenery make it ideal for exploring on foot. Plus, thanks to its total lack of light pollution, Gozo is an excellent place for stargazing.

In between Malta and Gozo lies the smaller island of Comino which is populated by a grand total of two people! The waters here are renowned for being crystal clear so the lagoons and inlets are popular with swimmers and divers.

It's also home to the 16th-century Santa Marija Tower (you can guess who built it). Throughout its history the tower has been used to defend against Ottomans, as an isolation hospital for plague patients, and more recently as a prisoner of war camp.

The Blue Hole is one of the most popular and striking locations on the island of Gozo. Set in a coastal inlet, this natural, circular hole is connected to the open sea by an arch 10m below the surface of the water.

It's more than 60m deep and a very popular spot with scuba divers as it's home to a fascinating seascape of fallen debris and natural rock formations, as well as plenty of sea life including groupers and moray eels.

If you're not an experienced scuba diver but still want to explore the sea here, there's an area of shallows nearby called the Coral Gardens and it's ideal for snorkelling.

The Citadel, or ic-Cittadella, is a vast medieval fort that sits on a hill and has defended the island of Gozo since the 1500s, although the area has been inhabited for thousands of years.

The Knights of St John added fortifications to the area and within the walls you can find a cathedral, some churches and a maze of narrow streets lined by medieval buildings. In the 16th century it was law that all residents of the island had to spend the night within the walls of the fortress to keep them safe.

Nowadays the Citadel is a popular hub with many of the old buildings occupied by cafes, restaurants as well as shops selling a selection of local crafts, cheeses, wine and other produce - a perfect place to pick up souvenirs.