10 of the Greenest Destinations in the World

We've been doing a bit of research here at Holiday Extras so we can help you have a good trip. Part of that is helping you decide where to go. We've put together a list of what we think are the greenest holiday spots from all over the world.

According to Earth.com Italy ranks 15th in global sustainability. But this is our list and not theirs. Every Italian school student spends at least one hour a week learning about climate change – which should help with the country's long-term goal of reducing their reliance on fossil fuels substantially by 2030.

Italy has faced problems in the past with overcrowding due to tourism but since the pandemic efforts have been made to preserve the country's most popular and historic destinations. For example, there are now limits to the size and number of cruise ships that can dock in Venice. Tourists are also being encouraged to visit lesser-known regions like Tuscany or Lombardy – where you can explore the gorgeous foothills of the Lombardy Alps.

Spain has committed to using 75% renewable fuel sources by 2030, and to be 100% reliant on them by 2050. Given the abundance of sunshine we all flock to Spain for, it's no surprise most of this energy will be solar.

Being one of the most popular holiday spots in Europe, Spain is on a mission to preserve its environment for future visitors. Part of this is promoting ecotourism as an alternative to the typical fly and flop holiday. Next time you're planning a trip away, why not opt to stay in a converted farmhouse or convent instead? Smaller, independent places like that are a great way to support the local economy and immerse yourself in the culture.

If you do find yourself in a bigger city, many of the public transport options run on electricity, hydrogen or ethanol, which cuts down massively on emissions.

Just under 80% of Canada's energy comes from renewable resources – which is comforting to know since it's the world's second-largest country. Filled with so much biodiversity, from dense forests to lofty, snow-crested mountains, it's an excellent choice for an eco adventure.

A great way to see a big chunk of the country is to travel by train, and if you really want to treat yourself why not book a cabin on the iconic Rocky Mountaineer? This luxury train is one of the best ways to experience the Canadian wilderness, allowing you to admire the jaw-dropping scenery during the day and staying in a comfy hotel at night. Plus it allows you to visit some of Canada's most popular destinations, like Vancouver or Banff, without hiring a car or taking a coach.

Something that sets New Zealand apart from the other countries on this list is its relative lack of pollution. There are a few reasons for this but the main being the respect and dedication the citizens have to preserving the beauty of their home. When you combine that with low population density you get a pretty clean environment.

As it happens New Zealand only contributes about 0.2% of the world's total greenhouse emissions and is fully committed to a carbon neutral future. Plus, around a third of the land is protected or part of the country's 13 national parks – so there are plenty of opportunities for a green holiday there.

Sitting between Croatia, Italy and Austria, Slovenia has everything from waterfalls and mountains to clean cities and a stunning coastline. It's blessed with such stunning scenery it's no wonder the Slovenians are so keen on preserving it.

The capital, Ljubljana (pronounced loo be AH nuh, in case you were wondering), won European Green Capital in 2016 so it's the perfect place to kick off your green adventure. And green is the word here, as the city has more than 542 square metres of green space per person! There's also easy access to national forests, mountains and even wildlife – Slovenia is one of the best places to see the Eurasian brown bear in the wild.

They don't call it the Paris Agreement for nothing. Our besties across the Channel came 4th overall in the Global Sustainability Index in 2020 thanks to their efforts in adapting aspects of their culture and industry to more sustainable methods. Ranging from winegrowing to fine dining, and architecture to fashion – pretty much everything that makes France French!

There's plenty to do in France if you want a sustainable trip too. It's one of those places that has a bit of everything – gorgeous beaches, historic cities, mountains and countryside. It also has a total of 11 national parks, which cover 60,000 square kilometres. Plus it boasts some of the greenest cities in the world, including Nantes, Dijon and Grenoble, all of which have been shortlisted for the European Green Capital Award. There's also Lyon, which was named French Diversity Capital in 2019.

The land of ice and geothermal energy… Iceland is one of the most uniquely beautiful places in the world, and the country wants to make sure it stays that way. It has ambitious goals to be carbon neutral by 2040 and free of fossil fuels by 2050. It's almost there too – thanks to a combination of hydropower and geothermal energy, 90% of Iceland's energy needs are met by renewable sources!

They're also working on removing excess carbon – using technology to suck it out of the atmosphere, store it safely underground and then dissolve it. Just don't ask us to explain how. Many of the attractions in Iceland revolve around the island's natural beauty and bountiful renewable energy sources, many of which come from the volcanic rumblings constantly happening underground.

Norway has made a huge commitment to going fossil fuel-free. Currently 95% of the country's energy comes from hydropower and pretty soon the sale of petrol and diesel cars will be outlawed. In fact, Norway has the biggest market for electric vehicles in Europe.

One of the country's biggest assets, especially when it comes to tourism, is the fabulously pristine and stunningly beautiful fjords. These coastal inlets and the jaw-dropping scenery that often accompanies them attract travellers in their millions every year. Many of them visit aboard cruise ships, which is why Norway will only be allowing electric ferries from 2026 to keep the waters as clean as possible.

Of course, large cruise ships will still be able to visit, however this comes with higher tax on emissions. They are also looking into ways they can guide ships into the fjords using electric-powered tug boats, effectively cutting emissions to zero while in the fjords. 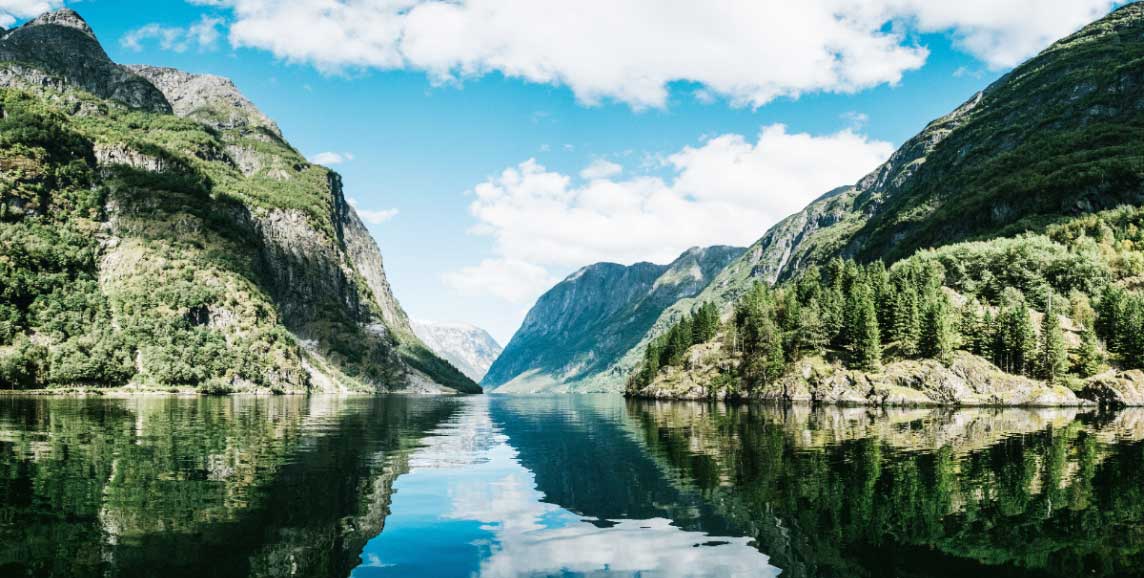 It's easy to be green in Estonia, especially when everything is so close together. Travel is one of the biggest contributors to climate change, so it's a good thing that in most Estonian cities you can get around on foot. If you do need to get around a bit quicker, public transport is efficient and electric. In Tallinn, the transport network is free for city residents and those visiting for certain events.

There are plenty of ways to make your visit here low impact too, with a bunch of eco-themed activities to take part in. Take a walk through the country's unique wetland and bogs, or forage for berries and mushrooms with an expert guide. You'll have a choice of green hotels as well – just keep an eye out for the Green Key label, which is only awarded to those that follow a strict set of rules.

Sweden definitely understood the assignment when it comes to sustainability. In fact, Stockholm was the first city to win the European Green Capital by the EU in 2010, and they were the first country to set up an environmental protection agency way back in 1967. They've been on it since before sustainability was cool.

The country is on track to be completely fossil fuel free by 2045, and it has plenty of sustainable travel options too. Go dog sledding in the Arctic Circle, go camping out in the wilderness, or even enjoy a city break in Stockholm or Gothenburg – just make sure you book a Nordic Ecolabelled hotel. These green accommodations follow strict rules on energy efficiency and fossil fuel usage, so you know your stay won't be leaving behind a big carbon footprint.

Tempted to see it for yourself? Here are some of our top things to do in Stockholm. 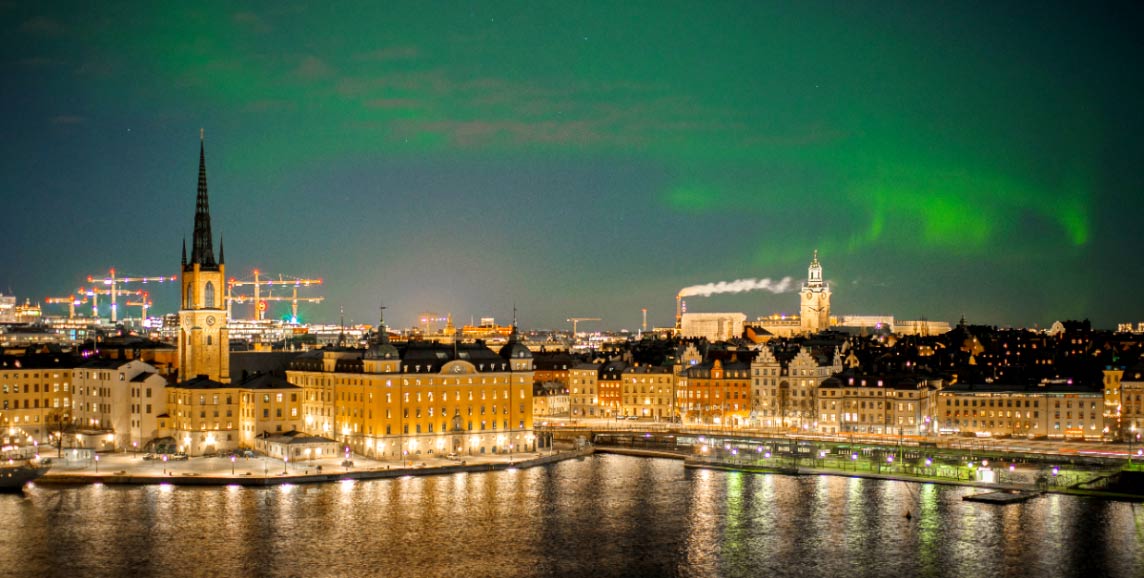 Green On The Go Podcast

12 Tips On How To Travel With Less Plastic