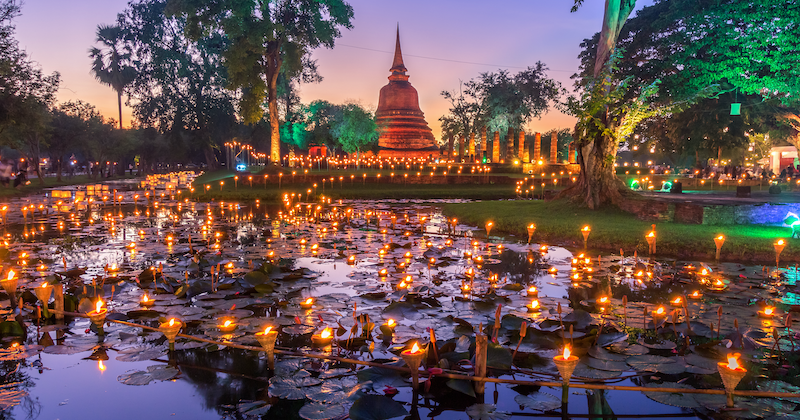 Where to travel in November

Our top pick for November is Phuket in Thailand.

Why? Because it's your top pick too – or at least, in the top ten fastest-rising destinations over the summer, as the country reopened and holidaymakers jumped on planes again to make their bucket list wishes come true.

Also because it's the Loy Krathong lantern festival in November – Thailand's nationwide light festival to celebrate the full moon and thank the river goddess for nourishing our lives. The festival is a spectacularly beautiful light show on Thailand's rivers, and is not therefore without its detractors – many of the lights are not biodegradable and later end up littering the country's waterways. So if you plan to take part please put in the time to find an environmentally friendly celebration.

Outside the festival, Phuket is an island paradise. Thailand's largest island, Phuket has everything – white sand beaches and upscale resorts to the north, jungle to the south and Patong on the west coast for dive bars and debauchery. Any one of the diving, food, temples, towns or beaches would all make for a great holiday on their own – combine the lot on one island and no wonder Phuket is growing faster than any other long-haul beach destination.

Fly all the way to Thailand for exotic temples and stunning architecture, or see some practically on your doorstep just outside Lisbon, Portugal.

Quinta da Regaleira is Portugal's answer to Neuschwanstein, King Ludwig's baroque, fairytale castle overlooking Bavaria. Built at the start of 20th century between 1904 and 1910, the site includes the Romantic castle itself, grounds, chapel, an extraordinary network of tunnels and grottos under the park and two 'wells' or inverted towers with steps spiralling down into the earth.

Quinta da Regaleira is part of the UNESCO heritage site of Sintra, just half an hour out of Lisbon by car. Historically the town and surrounding area was a royal sanctuary, and the region is dotted with notable palaces as well as sitting in the foothills of the Sintra Mountains and a stone's throw from the Atlantic coast.

Fly into Lisbon, take in the many sights of the capital, and then our tip is to hire a car and head out to Sintra to enjoy Quinta da Regaleira and the cultural highlights of this spectacular heritage site.

New York City, the capital of the twentieth century, needs no introduction from us. Shop in Manhattan, watch a ball game and if only for a week or two you can live the life we all watch on TV. NYC was the absolute top of everyone's bucket list for a city break in 2022, but don't just stay in the Five Boroughs. Jump in a car and in an hour or two you're out of the city and in the backwoods of New York State, and this often-overlooked patch of America is well worth a visit if you're already flying into JFK.

November is Thanksgiving, and that's reason enough to hop across the pond and join in with America's biggest annual celebration. This year Thanksgiving falls on Thursday November 24, so if you want to enjoy a pre-Christmas turkey that's the time to get over there.

Even if you're not heading stateside, you can enjoy a proper American Thanksgiving at home

Remember, remember – November 5 falls on a Saturday this year, so the weekend's bonfire celebrations will be spectacular. There are famous bonfires all over the UK – for example Lewes in Sussex bills itself as the only proper bonfire celebration in the UK, and for sheer history, vibrancy and riotous spectacle they're probably right. Alexandra Palace offers London's best show – visible on its hill from all over London – and in Ottery St Mary flaming tar barrels are carried precariously through the town.

But for our money fireworks are best enjoyed with the kids, and for a kids firework show you can't beat the Legoland Fireworks Spectacular. Widely regarded as one of the most impressive shows in the country, it runs from November 4 to November 6 and of course you don't just see fireworks – the park stays open till 7pm, and if you make it a short break you can stay over at one of the park hotels rather than dash home at the end.

Stay over for the best fireworks show this year.

All the hot new city breaks this year seem to cluster at the cheaper end of Eastern Europe, where a long weekend somewhere new and exciting is often less expensive than spending the same weekend out in London.

Podgorica is pretty consistently the top result if you just ask Skyscanner to find you somewhere for a weekend away but don't mind when or where you go, which may account for its surge in recent popularity – trips there are up 260% on 2019. Montenegro has the strange distinction of having adopted the Euro as its official currency without having asked or got permission from the EU – in 2002 it just started using the Euro, replacing the now-defunct German Mark.

Podgorica is architecturally unusual. Most of the city was destroyed in the Battle of Podgorica during the second world war, so almost all of the current city was rebuilt in the communist era so is replete with Soviet blocks and large public parks. An Ottoman old town remains, as do a number of historical features such as the Old Bridge and the 16th century clock tower. But to get the best out of Podgorica head just out of the city to see Lake Skadar, Mora?a River or Niagara, a spectacular waterfall.

Famous as a winter sun beach resort with practically guaranteed weather, Tenerife can be so much more than a beach break.

You'll inevitably fly into Tenerife Sur at the southern tip of the island, and from there it's a short drive to the Anglophone bars and resort hotels on the south coast of the island.

But pick up a car at the airport and head north instead, and you'll find yourself in a whole other Tenerife. Stay at the top of Mount Teide, not just the Canaries' but Spain's highest mountain, and see the stars in the otherworldly quiet once the day-trippers have gone home. Head to the Mercedes Forest or Anuga Rural Park to hike through ancient forests, or head up to Punta de Teno, a peninsular sticking out into the Atlantic where you'll find secluded black sand beaches and visitor numbers deliberately limited by the local government.