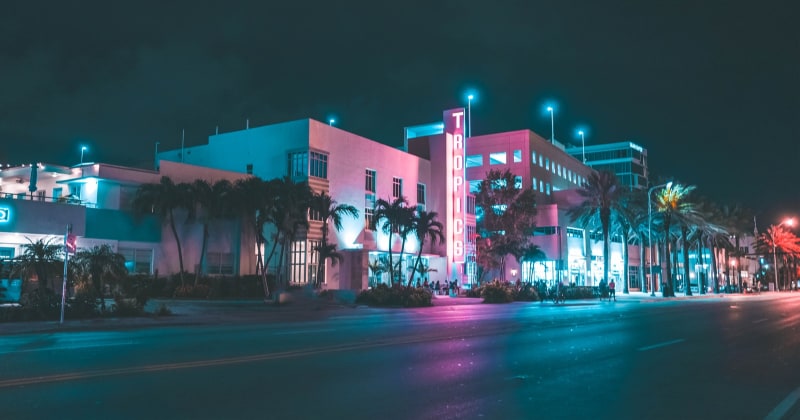 Top things to do in Miami

Places to visit from Miami

What time is it in Miami?

What currency do they use in Miami?

What US state is Miami in?

What power adapter do you need for Miami?

Type A and B

How long is the flight to Miami?

Current testing requirements for the USA

What is Miami known for?

Miami is known for its gorgeous beaches, warm climate, amazing nightlife, vibrant culture and of course THAT Will Smith song.

Is Miami a safe city?

Miami is a fairly safe city for tourists, especially if you keep to the tourist areas. It has at times had a reputation for not being the safest, largely due to gang and drug activity - but it's not something you will find in the most popular areas. In general avoid Overtown and Liberty City - both day and night.

The biggest safety concern in the main tourist areas is pickpockets who do operate on the beaches and crowded downtown areas. Be sure to keep an eye on your belongings and make sure your valuables are safe.

Another safety concern is less to do with crime and more to do with the weather - Miami is in an area known for its hurricanes. If you do find yourself there during hurricane season then be sure to keep an eye on local news.

How many days do you need to see Miami?

With a 10-hour flight it's likely you'll want to stay in Miami for at least a week. In the city itself there are plenty of neighbourhoods to explore, great beaches and lots of museums. Miami is also a great base for heading off to see other parts of Florida like the Florida Keys and the Everglades.

What's the best month to go to Miami?

The weather in Miami is consistently warm all year round with temperatures averaging between 20 and 30C. If you're looking for warmth then the best month to visit is July when temperatures peak and spring rainfall drops off a little.

Though it's warm year-round it's also prone to rain meaning a bright sunny day can quickly turn to intense rainfall. These don't tend to last long however.

If you're looking to visit when it's quieter, head there at the start of the year between January and February.

Miami International Airport is one of the busiest in the USA and you can fly there direct from London Heathrow. British Airways operates the most regular direct schedule, but American Airlines and Virgin Atlantic also offer direct flights.

Direct flights to Miami start around £400 and the flight takes around 9 hours and 50 minutes.

As with most places in America the easiest way to get around is by hiring a car - this gives you the freedom to explore at your own pace and also get out of the city to visit the Everglades or the famous ocean road down to Key West.

Miami is a sprawling city, and even next-door neighbourhoods are spread out from each other which makes a car by far the easiest way to get around. If you don't want to (or can't) hire a car, then apps like Uber are always an option. In the downtown tourist areas there are plenty of Uber drivers, so you won't have to wait long for a ride.

If you plan on getting around Miami without a car then you have a few options - Trolley, Metromover, Metrorail or bus.

Book your cheap airport transfers from Miami International Airport through Holiday Extras from under £16.00pp, with FREE cancellations up to 3 days before departure.

Pre-book your Florida car hire, with prices starting from just £29.44 per day with FREE cancellations*

A quick guide to Miami's neighbourhoods

South Beach is probably Miami's best known area and where you'll find the majority of the beaches and nightlife hotspots. You'll find Ocean Drive in South Beach known for its art deco architecture and outdoor cafes. This is the main tourist area and is the iconic Miami experience.

Little Havana is the Cuban heart of Miami reflecting the heritage of the 500,000 Cubans who arrived in Miami after the Cuban Revolution. Here you'll find amazing Cuban food, cafes, cigars, art galleries and during March it's the home of the Calle Ocho festival. For the best and most authentic Cuban food make sure you try Versailles.

Wynwood is one of the most popular districts and has a thriving food and art scene. The streets here are lined with amazing street art - in fact Wynwood Walls is a large-scale open-air museum showcasing some of the world's best street artists. There are craft breweries, art galleries, boutiques, bistros and bars.

Downtown Miami offers much the same as any other American city - shops, offices and restaurants aplenty. In fact here is where you'll find Nusr-Et Steakhouse, famous of course as the home of Salt Bae!

If you've got some dollars burning a hole in your pocket then head to the design district and hit up all the luxury fashion and jewellery boutiques! This modern district is downtown and you'll find plenty of shops, celebrity-chef restaurants and public art including the Fly's Eye Dome.

Coconut Grove is the leafy and more laidback neighbourhood where you'll often find peacocks casually wandering the street. Here you'll find the iconic Vizcaya Museum and Gardens a lavish Italian-style villa that's one of the top sites of Miami.

Top things to do in Miami

This National Historic Landmark is the former estate and villa of John Deering (of harvester fame) - this 20th century building and gardens were built in an Italian Renaissance style.

This modern waterside art museum is a must-visit for art lovers in Miami. It has a great selection of contemporary artists and includes an amazing augmented reality experience from Miami-based artist Felice Grodin.

Head to this popular neighbourhood and the outdoor street art museum - designed to showcase the best street art talent from around the world. It's free to explore and this vibrant neighbourhood is one of our favourite spots in Miami.

Where to visit from Miami

The Everglades National Park is a 1.5 million-acre wetlands preserve home to many animals including the endangered leatherback turtle, Florida panther and West Indian manatee. Most people associate the Everglades with alligators and one of the best ways to see them is by going on an airboat adventure.

It is hard to grasp the sheer scale of this important wetland environment - it's vast and largely inaccessible except by the water.

Once you've had your fill of the city we recommend hiring a car, or booking a tour, and travelling down to Key West. The Florida Keys are a string of tropical islands that stretch about 120 miles off the southern tip of Florida. To reach the end of Key West you'll travel along The Overseas Highway - a 113-mile stretch of highway that crosses land and sea. It's one of the top drives in the whole of the United States.

Only accessible by boat, Biscayne Bay is an area of coral reef, islands and shoreline mangrove forest home to dolphins, turtles and pelicans. Take a trip out of the city and explore this beautiful haven. If you're a keen scuba diver then the Maritime Hertiage Trail is a must - it's one of only eight US National Parks you can dive in and you'll swim among shipwrecks and pristine reefs.

It's hard to imagine a trip to Miami without stopping at South Beach - it is after all THE Miami Beach experience. Head there for a day on the sand or to just watch the goings on and take in the atmosphere.

This small beach community was once the stomping ground of the rich and famous. Dine in the glamourous Four Seasons or hit a more chilled-out local deli. The beach is great for families, as it's quieter and more relaxed than the bigger party beaches. If you get bored of the beach head to the water park at the Surfside Community Centre.

If you're looking for a beach outside of the city then head to Bill Baggs Cape. You'll find a picturesque lighthouse and long sandy beaches without the tourist bustle of the big city beaches.