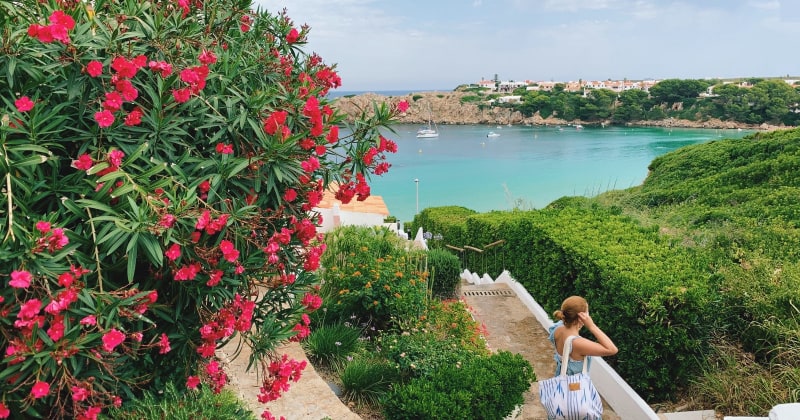 Menorca is a popular holiday destination thanks to its countless golden beaches (700 square kilometres' worth) and the welcoming resorts that frame the island. But there's so much more to Menorca than that.

Top things to do in Menorca

Where to stay in Menorca

What to eat in Menorca

What time zone is Menorca in?

What curreny do they use in Menorca?

What language do they speak in Menorca?

What power adapters do you need for Menorca?

What is the average fight time to Menorca?

How easy is it to get to Menorca?

Menorca has one airport, just a few kilometres away from the capital, Mahon. There are plenty of direct flights from the UK to Menorca and it takes around two and a half hours to get there.

Some facts about Menorca

Menorca is a popular holiday destination thanks to its countless golden beaches (700 square kilometres' worth) and the welcoming resorts that frame the island. But there's so much more to Menorca than that. For one thing, it's really quite beautiful with its green mountains, high cliffs and sheltered coves, and for another it has a rich and fascinating history spanning thousands of years.

Menorca is blessed with a warm Mediterranean climate, with hot summers somewhere in the region of the high 20Cs and low 30Cs. But it's still warm enough to visit in spring or autumn too, with temperatures remaining high into October.

Menorca gets a little more rain than the other Balearic islands and it's most likely to fall in the autumn, so if you're visiting at that time of year make sure you're prepared.

Menorca is part of Spain which, as a member of the EU, uses the euro.

Do you need to tip? Tipping isn't always expected but it will be appreciated, especially in taxis – just 5%-10%. Many restaurants add a service charge to the bill so only tip if the service has been very good.

Menorca has two official languages – Catalan and Spanish, though most residents speak a Menorcan dialect of Catalan known as Menorqui. English is widely spoken in popular tourist areas as well, so you shouldn't have too many problems. Here are some Spanish phrases to get you started:

Menorca was made a UNESCO Biosphere Reserve in 1993 thanks to its well-preserved natural landscapes, wildlife and culture. This is why there aren't any motorways on the island.

This doesn't mean driving here is inconvenient – the island is criss-crossed by a small network of scenic roads that run along the coast, through green fields and up rugged mountains. There's one main road that crosses the island from east to west, but it only really gets busy with traffic in summer.

A good thing to remember if you're planning on driving here is that most petrol stations are inland, away from the beach resorts, so make sure you fill up the tank at every opportunity.

Getting around the island by bus can seem to be a bit complicated at first, as the bus networks on the island are divided among the local authorities and three separate companies. But they all work together to get you where you need to go, whether to or from the airport, or between the island's two major cities – Mahon and Ciutadella.

If you're visiting off season some regular bus services might not be running, so make sure you double check when planning your transport from the airport to your resort and back.

Make the trip from airport to hotel pain free! Pre-book an airport transfer, with prices starting from just £6.08 with FREE cancellations*

Pre-book your Menorca Airport car hire, with prices starting from just £6.53 per day with FREE cancellations*

Top places to visit in Menorca 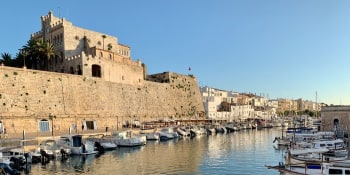 Ciutadella was once the capital city of the island and lies on the west coast. It's a charming medieval city filled with narrow streets framed by amber coloured buildings.

Stroll along the cobbles to the old harbour, or to the Placa d'es Born – the town square overlooked by the mighty 14th-century town hall. The island was governed from here until the capital was changed to Mahon in 1722. 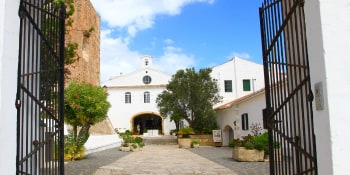 Monte Toro is the highest peak on the island as well as its only mountain, meaning you can see it from almost anywhere. It's around 350 metres high, and you can scale it on foot or by car. From the summit you can take in views of the whole island, and even the neighbouring island of Mallorca on a clear day.

The summit is also home to the Sanctuary of the Mare de Deu del Toro, a 17th-century chapel, and a community of Franciscan nuns. 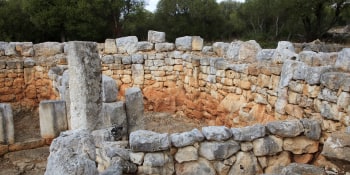 Torre d'en Galmes is an ancient site that dates from the Talayotic period of Menorca's history, more than 3,000 years ago.

It's completely in ruins now but you can still make out the town's relatively advanced underground water reservoir and rain catchers, as well as the unique circular houses and outbuildings separated by columns and walls.

A number of fascinating artefacts have been unearthed here, including a bronze statue of Egyptian priest Imhotep, showing the town once had contact with ancient Egypt. You can learn more at the Museum of Menorca in Mahon.

Explore the caves of Menorca

Menorca has a honeycomb network of caves home to the hidden depths of the island. There's a countless number of them, some of which haven't even been explored, but the largest of them is one of the most famous attractions on the island.

The Cova des Coloms is 300 metres long and 24 metres high, and the limestone formations inside give it the appearance of a naturally formed cathedral, with vast columns and echoing walls.

Another popular cave is the Cova d'en Xoroi, near the resort of Cala en Porter. The cave here is carved into a cliff face and features a number of terraces across multiple levels, with stunning views over the sea. The cave is also home to a bar, and many visitors like to come to enjoy a drink as they watch the sunset.

Where to stay in Menorca

The island's capital, also known as Mao, is a lively city easy to explore on foot, with an exciting collection of boutiques, bars, restaurants and music venues to keep you entertained.

The city is also the heart of the island's nightlife, and while it doesn't compare to the mega clubs of Ibiza, it does boast a selection of smaller clubs that are quite popular.

In terms of where to stay, Mahon has everything from up-market hotels to small, family-run B&Bs.

Cala Galdana is known as the 'Queen of the Calas' – the scenic coves that are home to most of Menorca's best beaches and resorts. The resort of Cala Galdana is, of course, blessed with a picturesque beach of white sand and shallow, clear water where you can enjoy watersports and snorkelling.

But there's more than just a beach – cliff-top walks, mini golf, plenty of restaurants plus a combination of all-inclusive hotels and self-catering apartments make the resort ideal for families.

Binibeca lies on the south-eastern tip of the island, framed by beaches and coves. It's perfect if you're looking for a more traditional stay as it's relatively untouched by the big holiday companies in the main resorts.

Instead, much of the accommodation here consists of small, locally owned hotels and villas that can be rented. Letting you enjoy the best of the town and its surroundings, which included a glorious, sheltered beach, a mini train that runs to the nearby town of Punta Prima, and the neighbouring traffic-free settlement of Cala Torret.

What to eat in Menorca

One of the most famous and popular dishes on the island is caldereta de langosta, a stew with local spiny lobster, tomato and garlic. It's served pretty much everywhere so you won't struggle to find it.

Another popular dish is bacalao ab burrida, balls of cod served with garlic sauce similar to aioli – you might like to try it with tumbet, a mix of chopped potatoes, onions, aubergine and peppers fried until crispy.

For dessert you must try bunuelos, small fried balls or fritters, similar to profiteroles, stuffed with a variety of sweet fillings – including sweetened Mahon cheese.

Gin has been a very popular tipple on the island since it was occupied by the British in the 18th century, and there are a number of local distilleries. It's often served with cloudy lemonade and ice – a refreshing combination known as Pomada. 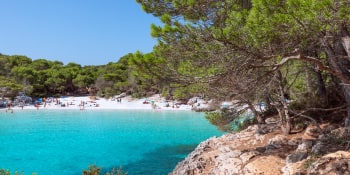 Menorca is an island known for its beautiful beaches, and Cala Turqueta is one of the best. Set within a cove south of Ciutadella, this stunning stretch of sand is flanked by pale cliffs covered in pine trees – some of which you can jump from into the crystal blue water.

Because of its gorgeous scenery and surroundings, the beach is extremely popular, so if you want a good spot to roll out your towel, you better get there early. There are a couple of car parks within a kilometre of the beach but they will fill up quickly – or you can take a taxi instead. 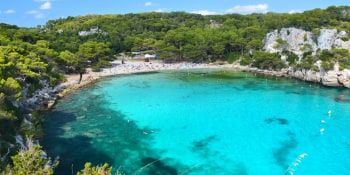 Cala Macarelleta was awarded a TripAdvisor Traveller's Choice for 2021 - so you know you're onto a winning beach here.

You can find this beach a 10 minute walk from Cala Macarella, one of the most famous beaches on the island. Believe the reviews when they say it's worth the walk for thesoft sand and turquoise sea - we suggest you arrive early to grab the best spots. 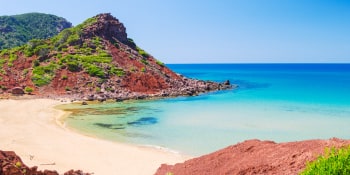 This wonderful beach is reached by a 45 minute walk through some lush woodland - which keeps it a little bit quieter then the resort beaches. When you reach the beach you'll find crystal clear waters and a lovely sheltered cove - making for the ideal swimming spot.

Make sure you pack for the day as there are no facilities - and this beach is not an accessible friendly choice.