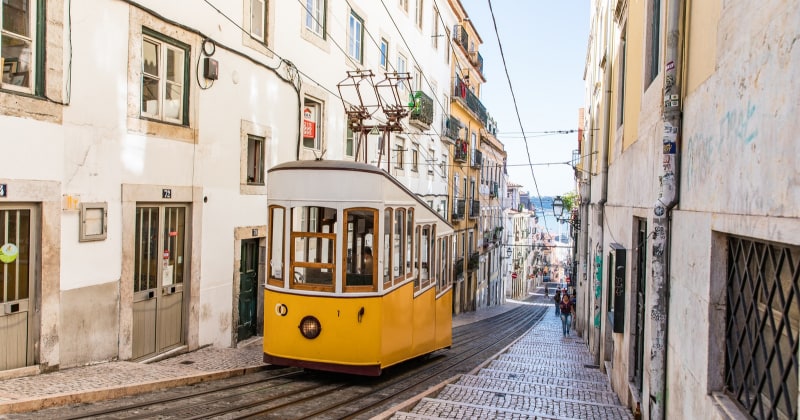 Lisbon is Portugal's effortlessly cool capital which blends the perfect balance of culture and history, while modestly boasting the best custard tarts on the planet!

Mix this all up and you have the perfect recipe for what promises to be an ideal European city break. We're going to take you through our top tips for 48 hours in Lisbon. We've done the hard work for you, meaning that your trip to Lisbon is hassle-free.

Top things to do in Lisbon

What to eat in Lisbon

What time zone is Lisbon in?

What curreny do they use in Lisbon?

What language do they speak in Lisbon?

What power adapters do you need for Lisbon?

What is the average fight time to Lisbon?

What language do they speak in Lisbon?

It should come as no surprise that Portuguese is the most-spoken language in Lisbon. In fact according to UNESCO, Portuguese is the fastest growing European language after English. While English is widely spoken, it's great to give the locals an opportunity to laugh at us, so here are a few tips and some phrases to get you by during your Lisbon trip.

Make the most of your money in Lisbon

The Portuguese currency is Euros. There are plenty of ATMs around and debit and credit cards are accepted in most places.

Take a look at what we spent to give yourself an idea of what you can expect to pay:

Like the rest of Europe tipping is a done thing throughout the whole of Portugal, including Lisbon and other cities.

A service charge is not usually added to bills but double check first, especially if you are in the tourist areas. If it's not been added, it's custom to give 10% of your bill, but only if you feel the service was exceptional.

The average flight time from London to Lisbon is around 2 hours 45 minutes and once you arrive the ariport itself is just over 4 miles away from the city, which means that hiring a car and driving, or hailing a taxi, should take about 20 minutes in good traffic.

As for hire cars, there's nothing quite like the freedom of jumping in a car and driving off into the sunset. However, the streets of Lisbon are old and winding so aren't built for today's traffic. If you're planning on staying in the city it's easier to use public transport instead. If you want to explore local areas like Estoril and Cascais, then hiring a car in Lisbon is a no-brainer.

An alternative to getting to Lisbon by car, is to take the aerobus, which runs two lines to the main hotel areas and costs €4 per person each way.

Like most major cities there are plenty of public transport options to get you to the city centre. For example, the metro runs from 6am - 1am everyday, or there's the city bus. They're cheap compared to private transport but make sure you allow for more time on your journey as they'll certainly take longer.

With all of the hills in Lisbon, we're not going to hold it against you if you want to save your legs – public transport is cheap, reliable and efficient. Some of your options include the metro, trams, buses and funicular lifts.

The metro is good choice if you're traveling long distances, but bear in mind that it doesn't cover all areas of the city. Lisbon's metro system is one of cleanest in Europe and most stations are open 6am - 1am, every day.

Firstly, they're a novel way of seeing Lisbon and since the city is so big, they're a great way to see as much as possible for very little money. Plus you're effectively killing two birds with one stone, particularly when you take the number 28 tram. This tram takes takes a circular route round the city and will also save your legs from a lot of walking. It's especially savvy if you've bought a 24-hour transport ticket since it's included.

Fortunately, there are trams that cover areas of the city where there is no access to the metro. There are two types of trams - the yellow Remodelado trams that route round the old narrow streets and the modern Articulado trams that operate along the flat sections of the city connecting central Lisbon to the Belém district.

The funicular lifts are used to help locals and tourists climb all those hills. The most famous lift is the Santa Justa Lift linking lower and upper Lisbon. It is technically a means of public transport but it also doubles up a a major tourist attraction and has great a view point at the top.

Lisbon has hundreds of buses and with 88 different routes, it's safe to assume that there's one going in your direction. For more information about navigating the buses and other transportation, we've got some tips coming up soon.

How much is public transport?

Working out how to pay for transport in Lisbon can get confusing so here's our simple breakdown:

You can pay for single tickets onboard trams, buses, lifts and at the station for the metro (but this will cost you more). It's more cost efficient to purchase a prepaid Viva Viagem card from the metro station, which works like a TFL Oyster card where you zapp it every time you use it.

These cards cost €0.50 and can be topped up as you go. Here are the differences in price:

If you're planning on making at least 5 journeys over 24 hours sve money and buy a 24-hour day pass. It costs €6 and includes unlimited travel on all trams, metro, buses and lifts including the famous Santa Justa which usually costs €5 alone.

A good tip is to pick up the transport map, Rede de Transportes de Lisboa, from the tourist office for timetables and prices. We think the best tourist office in the city is in Praça dos Restauradores inside the Palácio Foz, so if you're in the area head there for any help. We would also recommend downloading google maps to help you navigate your way around without having to rely on wifi.

Pre-book your transfers from Lisbon Airport, with prices starting from under £5.00 and FREE cancellations up to three days before departure.

Compare and book holiday car hire, with prices starting from £7.27 per day with FREE cancellations*

Top places to visit in Lisbon

The Torre de Belém is an iconic tower built in the 16th century as part of Lisbon's defence system. This stunning piece of architecture wouldn't be lost in Gondor with it's beautiful white bricks and ornate decor. You'll find it by the harbour and it can only be reached via a walkway across the water. Definitely one for Instagram.

Speaking of Instagram, budding photographers looking for panoramic views of Lisbon castle need to make their way up to Jardim de São Pedro de Alcântara. Fortunately you can take the Elevador da Gloria funicular lift to get there, otherwise, it's a hefty walk. It's worth it for some traditional market stalls and plenty of live music.

You'd be forgiven for thinking you'd hit your head and woke up in San Fransisco as the 25 de Abril Bridge is Lisbon's answer to the Golden Gate Bridge.

We recommend you take a ride up to the observation deck at Pilar 7 for unparalleled views of the city.

What to eat in Lisbon

Lisbon is a cosmopolitan city so you'll find every type of cuisine here. You'll probably stumble across many tascas along the back cobbled streets near the Bairro Alto area, serving rustic Portuguese dishes like stews, steaks, and fried or grilled fish.

For something a little more quick and fun check out Mercado de Ribeira. Mercado da Ribeira has been Lisbon's main food market since 1892. A few years ago it was taken over by Time Out Lisboa magazine, who added canteen-style dining selling anything from traditional portuguese cuisine to burgers and sushi.

Make sure you treat yourself to a Portuguese custard tart, otherwise known as Pastel de Nata, at the original cafe that sold them back in 1837. Pastéis de Belém has queues outside everyday because of their secret recipe that makes them the best in town. These tasty treats were first created before the turn of the 18th Century by the monks in the Jeronimos Monastery. Much like Guinness in Dublin, these delicacies definitely taste better on their home turf and if you don't believe it, have two just to make doubly sure.