The land of the midnight sun. 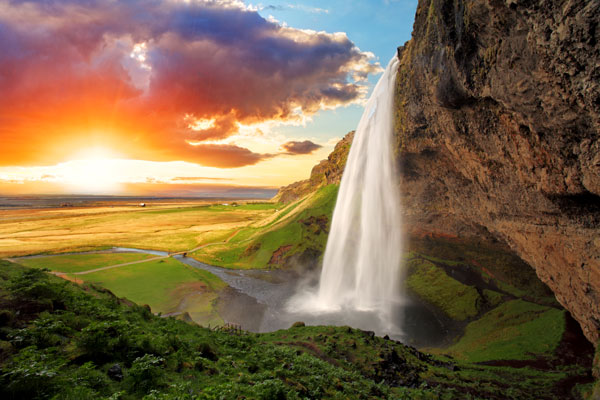 Iceland remains popular as an escape from the bustle of mainland Europe. Positioned in the North Atlantic Ocean approximately 180 miles south east of Greenland, Iceland's setting on the Mid-Atlantic Ridge has proved to be a key component to its attraction, with visitors enthralled by the abundance of geothermal activity.

Spurting geysers, spectacular waterfalls and rumbling volcanoes are all part of the island's make up, while steaming lakes and shimmering glaciers offer an ethereal sense of serenity. Icelandic capital Reykjavik is the world's most northerly, and has become a popular city break destination in recent years. From here, Iceland's visitors are in the perfect spot from which to experience the Northern Lights. Check out our guide to Iceland's Ring Road and find out why it should be on your bucket list.

The modern capital of Iceland has recently become a popular tourist destination, acting as the starting point for exploration of the island. With a setting just south of the Arctic Circle, Reykjavik is susceptible to summers of midnight sun and winters of dark days, yet its distinctive Old Town, lively nightlife and rich culture continue to captivate visitors.

Arguably one of Iceland's most famous attractions, the Blue Lagoon is a geothermal spa where waters rich in minerals are said to alleviate the suffering of particular skin allergies. Located on the Reykjanes Peninsula in south western Iceland, the waters are part of a lava formation, causing bathing waters to average 40 degrees celsius.

This fascinating phenomenon sees infrequent eruptions below the earth's surface - an activity thought to have been triggered by earthquakes in the area - to cause boiling water to be spurted some 60 metres into the air. The earliest accounts of geyser activity in the region dates from 1294, a factor no doubt instrumental to the popularity of the area.