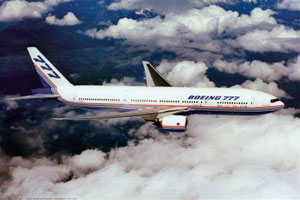 The Boeing 777-200 (twin-jet) is a long range, twin aisle, twin engined jet manufactured by Boeing, which is an American aerospace company. Often referred to as the 'Triple Seven' it was the first commercial aircraft entirely designed by computer. Its visible features include extra-large engines, low hanging landing gear, blade-shaped tail cone with a quite small tail fin. There are currently 68 in service.

The 777-200 was the original model of the the 777 variants, and was first delivered to the USA on May 15th 1995. Primarily used by Emirates, United Airlines, Air France and Singapore Airlines, passengers can enjoy super quiet and wide cabins with high ceilings for that extra comfort on a long flight. All seats include personal audio and video systems to enhance your flight enjoyment.

The FAA (Federal aviation administration) awarded the aircraft 180 ETOPS (extended operations) clearance on May 30th 1995, which made it the first ever airliner to carry an ETOPS-180 rating at its entry service. This was then later extended to 207 minutes the following October, meaning it could take its first commercial flight on June 7th 1995 from London Heathrow Airport to Dulles International Airport, near Washington D.C. The 777 fleet was temporarily withdrawn from service in 1997 due to gearbox wear issues, however it retuned to service later that year. 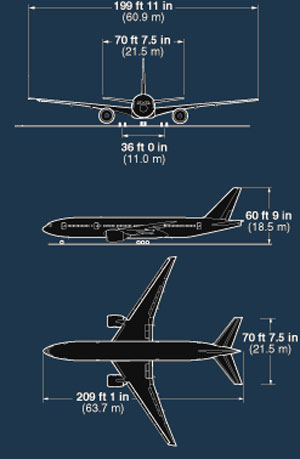