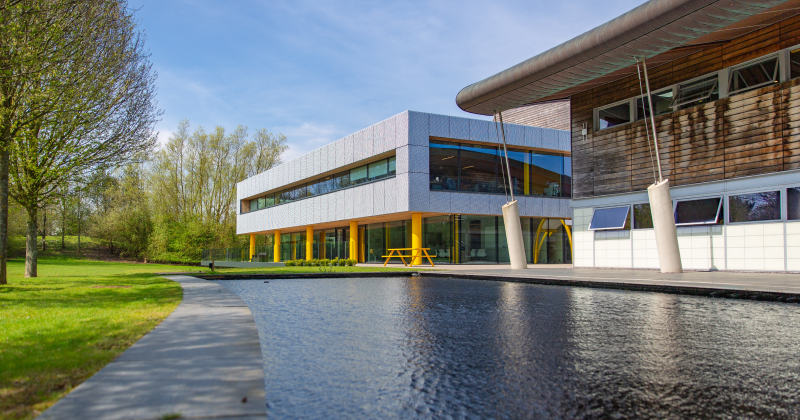 Want to know more about the Holiday Extras campus and all the fabulous locations surrounding it? This is the place.

Some facts about the Holiday Extras Campus

Getting to Holiday Extras

Some facts about the Holiday Extras Campus

Located in the Kent countryside between the M20 and the village of Lympne, our campus is an idyllic little haven in the midst of country lanes, farmland and woods.

We've got two buildings – the Wave, which we moved into in 2006, and the Reef, which officially opened its doors in 2018. Are you sensing a theme? They were both designed with collaborative working in mind and between them provide plenty of different meeting places and work spaces, from quiet booths of solitude to open desks and even beanbags.

That's not to mention the gorgeous, green outdoor spaces which are ideal for our on-campus barbecues and other events. We've even got a padel court (it's a bit like tennis).

Getting to Holiday Extras

There are a few different ways you can get to our lovely campus. First off you can drive – we're just off Junction 11 of the M20 and we've plenty of parking and even charging points if you drive an electric vehicle.

The nearest railway station is Westenhanger which is about a 10-minute walk away or an even shorter bike ride. We offer a cycle to work scheme as well.

This seaside town has quickly become a bit of a creative hub over the past few years. The eclectic mix of independent boutiques and restaurants, art galleries and installations as well as parks, gardens and some really gorgeous Victorian buildings all came together to make Folkestone Kent's top place to live in 2022.

Access to High Speed rail services, the M20 and the Channel Tunnel help make it a popular destination to visit from further afield – especially in summer!

Kent's cathedral city, Canterbury and its medieval core have buckets of history and heritage, from the original walls that enclose the city centre to the Gothic cathedral that towers above it.

Canterbury has two universities and is popular with international students, which gives the city a diverse vibe with a lively atmosphere - at least during term time!

If that's not your scene, the city has a pretty strong shopping game with a lengthy, cobbled high street edged by all your favourite brands.

This market town just along the M20 from the Holiday Extras campus boasts an international train station and a designer shopping outlet so popular people cross the Channel just to visit.

Its cosy residential estates and handy travel connections make it popular for those who work both locally and further afield.

Another coastal town with bundles of seaside charm, Deal has a fascinating history of fishing, maritime trading and smuggling all accentuated by its maze of narrow streets and quirky buildings. Popular thanks to its boutiques, independent coffee shops and tempting restaurants, it also has a pier and a couple of castles to boot.

There are countless smaller villages dotted all over the place in this part of Kent, so you're never far away from an idyllic churchyard or village green. A couple of examples include Pluckley, which is the most haunted village in England according to all official sources, and Capel-le-Ferne, which offers stunning walks along the White Cliffs and views across the Channel to France (on a clear day at least!).

For a classic trip to the seaside you can't beat Folkestone seafront. Whether you want a traditional day on the beach complete with a bucket and spade, windmills, deck chairs and ice cream, or something a bit different. Sunny Sands is probably the most popular beach but further along the seafront you'll find literal miles of pebble beach where you're pretty much guaranteed plenty of square footage to roll out your towel.

There's more than just the beach though. The Harbour Arm, which was once a cross-Channel ferry port, has been converted into a thriving food and drink hub where you can get anything from Mexican street food to Danish pancakes to cocktails. It also hosts a weekly market, regular events and a big screen.

The first of its kind, F51 is an indoor, multi-storey skateboarding, climbing and bouldering centre perfect for both first-timers and seasoned experts.

Or the Old High Street as it's traditionally known is a narrow, cobbled street that leads from Folkestone's town centre to the harbour. It's home to dozens of independent boutiques, art galleries and some of the best restaurants and coffee shops in town.

These two wild animal parks are run by the Aspinall Foundation and feature an ark's worth of animals from all over the world, including red pandas, wolves, gorillas and lions.

Port Lympne also has a pretty cool safari experience where you can get really close to Giraffes, gazelles and even African wild dogs.

Just across the way from Ashford International railway station, this vast shopping centre offers up to 60% off dozens of designer brands, including fashion, homeware, confectionery, electronics and perfume. There are plenty of tempting dining options too, offering cuisine from all over the world. It also helps that it's just 15 minutes up the motorway from campus.

But perhaps the best thing about it is that it's totally dog friendly!

Dating all the way back to the iron age, there's been a fortification at the site of Dover Castle for 2,000 years or more. The high walls enclose a crumbling Roman lighthouse and the 12th-century keep that was established by King Henry II, as well as some naughty sheep and cows that occasionally find themselves in the grounds.

Later on in its history the chambers and tunnels beneath the castle housed a Royal Navy base, bomb-proof offices and a hospital which you can all still visit. Later on a not-very-secret shelter was built there in case of nuclear attack during the Cold War. Thankfully it was never needed!

What's more the site doubles as a venue with regular events throughout the year, from music festivals to drum and bass weekenders. Really though, where else in the whole world can you stumble off a rollercoaster into an open-air McFly or N-Dubz concert? Nowhere else is the answer.

This mini, heritage steam locomotive (one third the size of more traditional trains) runs a 14-mile route from Hythe to Dungeness, stopping at Romney and Dymchurch along the way.

It's a great way to get close to the countryside and enjoy a trip to the seaside, making the most of Dymchurch's amusements and vast beach, or the beach-side artists' cottage in Dungeness.

If you're more into full-size trains and exploring further than the borders of the Garden of England (why though?), then it's super easy to get pretty much anywhere. The Channel Tunnel terminal is just outside Folkestone and allows you to take the car across to the continent in record time. Day trip to Bruges? Sorted.

You can also take the High Speed services from a number of towns including Folkestone, Dover and Ashford to get to London in an hour or less.