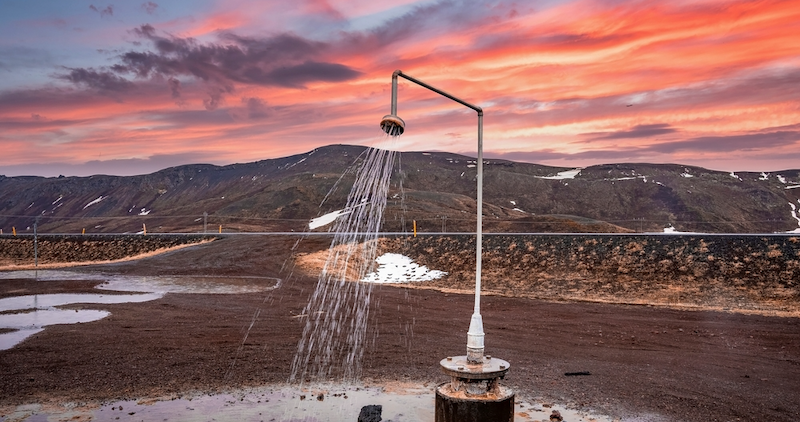 We're going where the energy's free

With energy costs on everyone's minds this winter, here are six destinations where the energy's free

Hot showers, baths, cooking, lights, ice – everyone's feeling the pinch as winter rolls in and energy costs spiral. Here are our top six picks for destinations where energy prices, for one reason or another, just aren't an issue.

First up is the Krafla geothermal shower in Iceland.

Tucked away in the remote and less-visited Icelandic north, Krafla is just outside Akureyri – Iceland's second city, and home to almost 20,000 souls – and easy enough to visit if you're travelling beyond Reykjavik and the Golden Circle. One way to head up here is a flight from the capital, then pick up a car and drive the wonderfully deserted roads all the way back round the east and southern coasts back to Reykjavik.

Even for a country filled with impossibly remote oddities, the shower at Krafla is unusual. Powered by a geothermal spring, it stands alone by the side of the road with no walls, no curtain, no attempt at privacy – just a free, hot shower standing in a field. It used to be accompanied by a freestanding toilet and handbasin, but these have disappeared.

Free geothermal energy isn't uncommon in Iceland – the country's hot water and much of its power comes from underground, and many towns boast open-air hot baths fed by geothermal springs. But the shower at Krafla stands alone, and if you have the self-confidence or sheer exhibitionism to try it out, anyone passing by is welcome to dive right in.

Our guides to Iceland

Join us as we explore Reykjavik, the Golden Circle and beyond

From free showers to free cooking, we head over to El Diablo, a restaurant on a volcano in Timanfaya National Park, part of the Canarian island of Lanzarote.

Our review team has visited El Diablo before (watch our video below) and said that it's as good as it sounds – food cooked on a volcano, with views from the restaurant's 360-degree panoramic windows out over the otherworldly landscape of the Fire Mountains. But the big draw is the spectacle of the chefs installing their huge grilling shelf on top of the shaft into the ground below, channeling the heat of the volcano to grill the restaurant's food to perfection.

Like our reviewers say – don't fill up on mains, the real star of the show is the volcano-cooked desserts!

Our guides to the Canary Islands

Not just Lanzarote but Tenerife, Gran Canaria and more

Guides to the Canaries

There are any number of locations which can lay claim to midnight sun, but Svalbard in Norway sees 24-hour sunlight from April all the way through to August, a third of the year. Throughout spring and summer the sun simply circles the sky, never setting, making for spectacular opportunities for photography, night-kayaking and investing in seriously good black-out curtains.

These remote northerly islands are home to polar bears, old mining towns, wildlife and fjords – and visitors also rave about the locally-brewed beer!

Norway sits in fifth place on the Holiday Extras Good Trip index, first for freedom of the press and scoring highly for women's rights, so we thoroughly recommend Norway as an ethical choice of holiday destination.

For us, the highlight of any trip to Türkiye is the cotton-candy cliffs of Pamukkale, central Türkiye's natural wonder of blue-green pools and white stone tumbling down the hillside.

Pamukkale is home not just to the cliffs but also to Cleopatra's Pools, a natural thermal pool older than the Roman Empire that has stood there, developed for people to enjoy, since the second centuery BC. The ruins of Heirapolis are Roman, and once you've walked to the top of the cliffs you can enjoy the Roman ampitheatre, library and other sites of the ancient city.

But the best part of Pamukkale, apart from the ballons over the cliff at sunset, is a dip in the pools that for more than two thousand years have been warmed by nature to the perfect temperature for a relaxing swim.

Not just Pamukkale, there are plenty of hidden gems in Türkiye

As every schoolchild knows, Death Valley is so hot you can cook an egg on one of the rocks. We know it's true because the Death Valley Park Rangers recently had to beg visitors on their Facebook page to stop just cracking eggs directly onto the pavements and leaving the mess behind for someone else to clean up – so if you're going to try this science experiment we implore you to at least use a piece of tinfoil if not an actual frying pan.

It works not because the air is as hot as an oven, but because – as Bill Nye explains – the temperature of the ground, especially if it's dark ground, can get a lot higher than the ambient air as it holds the heat.

Obviously in an ice hotel the ice is free, but stay here for a night and you'll get more than free ice. You'll sleep on ice beds wrapped up in furs against the cold, watch the Northern Lights and trek out onto the tundra to see the wildlife.

It's best to visit in winter, when every year artists recarve the rooms and the sculptures that form the main attraction before the ice melts back into the Torne river.

Sweden tops the Holiday Extras Good Trip Index, coming first for sustainability and scoring highly for press freedoms and women's rights, so if you're looking for an ethical winter trip Sweden is always going to be top of our list.

Sweden tops our Good Trip Index - come and see why.