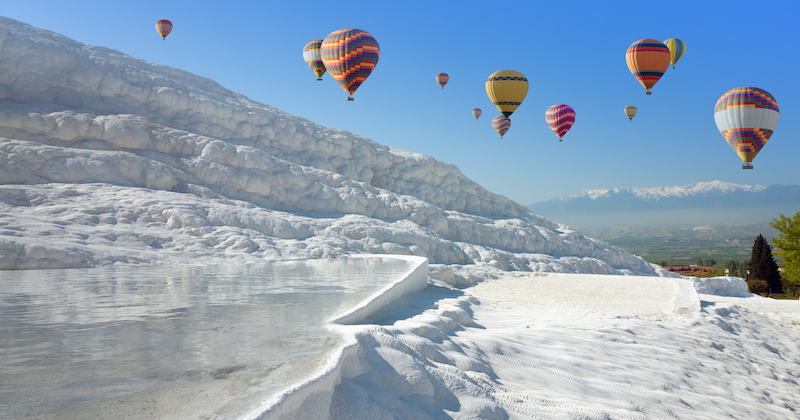 If you're flying to the Turkish Riviera you'll most likely land in Izmir, Dalaman or Anatalya and head from there to one of the many beach resorts on the coast. The villages and resorts on the Turkish southern coast are some of the most beautiful in the world and lots of us spend our week away just chilling in the sun on the beaches. But if you want a day away from the beach, a little adventure to tell your friends about when you get home, here's three hidden gems - all within easy reach of the main coastal resorts that would make for a great day trip.

Pamukkale is not one but two of Türkiye's hidden gems. Equidistant and about three hours by car or tour bus from most of Türkiye's south coast resorts - Izmir, Anatalya, Bodrum, Dalaman - Pamukkale is the perfect day trip out from your Turkish beach holiday.

As you arrive, you'll see the main draw of the town - the pristine, white mineral pools flowing down the mountain like a Cotton Castle, from which imagery the town derives its Turkish name. It's a pleasant hour or so to walk from the foot to the summit, stopping on the way to dip your toes in the warm, mineral-rich pools and enjoy the view.

On many days the skies above Pamukkale are rich with hot-air balloons, and the view both up the twinkling white cliffs and down over the valley are like almost nothing else on earth.

The cliffs themselves, and the pools spread over them, would be enough of a draw for a very enjoyable and scenic day trip. However at the top of the cliffs sits our second hidden gem, ruined city of Hierapolis.

Hierapolis is older than the Roman Empire, and the thermal baths there have been dated to the second century BC. The ruins at the top of the cliffs are Roman though, and once there you can explore the ancient amphitheatre, the standing facades of numerous classical buildings and, best of all, swim in the warm pools that have stood on the spot since antiquity.

It is a fitting reward for the walk up the mountain. The waters just right for the warm, temperate climate of the region and after dawdling ion the sunshine by the pools on the way most visitors are glad of the dip!

Less than an hour east of Dalaman by road, Fethiye is a well-known city and tourist resort conveniently located on Turkey's popular southern coast. Can a well-known city on the Turkish Riviera be a "hidden gem"? Clearly, no. But like Pamukkale, around Fethiye are a cluster of hidden gems well worth the adventure.

Holiday Extras is fond of Fethiye. Our video guides team visited in 2017 as part of our charity work with the Travel Foundation and filmed the sustainability projects going on in the town - check out our video below.

Around Fethiye we think two gems are most worthy of note.

First is the Butterfly Valley - a stunning combination of beach, cliffs, waterfalls, greenery and indeed the butterflies from which it takes its name. What makes this gem especially hidden is that the only safe (or legal) way to get there is by boat from Ölüdeniz, itself a bus ride from Fethiye. The relative inaccessibility of the beach keeps it clean, largely unspoiled and not too crowded, so for a tranquil swim somewhere secluded Butterfly Valley is our top pick.

Tourists will occasionally complain that there are no butterflies. There are - but they are most prominent in June, you are less likely to see them out of season, and if you make a lot of noise they tend to stay away. So if you come for the butterflies, plan accordingly.

Also around Fethiye is the Lycian Way. Running for more than 300 miles along the coast and named after the ancient Lycian civilisation that once ruled the region, this footpath is especially spectacular around the coast at Fethiye. The hike from Fethiye to Kabak is a popular section of the route, and generally best attempted in the spring or autumn - summer is too hot to hike in comfort.

3. The Temple of Artemis

Famously, the only truly extant wonder of the ancient world is the Great Pyramid of Cheops on the outskirts of modern Cairo. The Hanging Gardens of Babylon, the Library at Alexandria, the Colossus of Rhodes - all are gone.

However, if you have chance to pass through the Turkish town of Selçuk, the ruins of the temple are just outside. They are, quite unmistakably, ruins - this is not the complete, standing temple of legend. But there are foundations, pillars and crucially the chance to stand on the spot where one of the wonders of the ancient world once stood, and imagine.

The Library of Celsus, Epheseus

Also in and around Selçuk are the ancient Greek city of Ephesus and in the town itself a grand Byzantine fortress. Selçuk is less than an hour from the popular coastal resort of Izmir, so if you're staying in or around Izmir for a beach break and think it worth an hour's drive to see the remains of a wonder of the world, plus a number of other cultural monuments, we recommend popping in to Selçuk.

Our guide to Türkiye

Have a hassle-free trip next time you fly