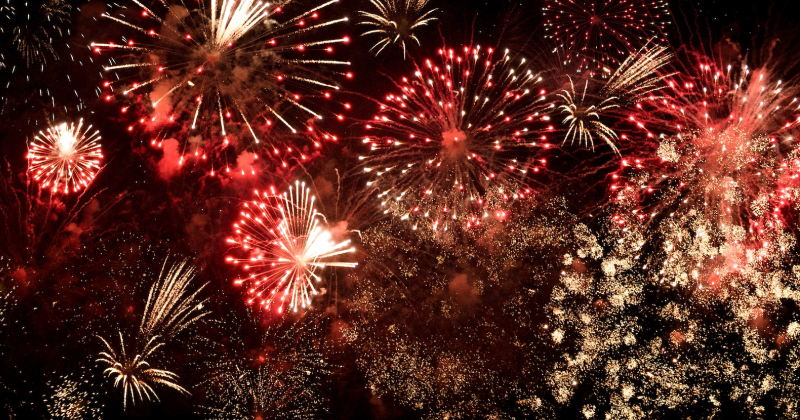 Originally held to commemorate the thwarting of Guy Fawkes' explosive attempt to assassinate King James I, explosives of a different kind now light up the night sky across the UK every year on 5th November. Discover blazing bonfires and the most dazzling displays that you won't want to miss this Bonfire Night.

Leeds Castle, found in the Kentish village of Leeds rather than the city in West Yorkshire, comes alive with a mesmerising display that combines fireworks, projections, lasers and amazing music to create a treat for the eyes and the ears.

This castle has a rich history, having housed royal residents such as Henry VIII and Catherine of Aragon, so you'll want to arrive early to explore its impressive grounds. There's plenty to keep you entertained, such as a maze, play areas for kids, falconry displays and perhaps the only museum dedicated to dog collars in the world.

Perhaps the best way to see the capital's iconic skyline light up is at Ally Pally's legendary Fireworks Festival. There truly is something to keep everyone entertained, including cinema screenings, live music and DJs, a German Bier Festival, street food, ice skating, a funfair, one huge bonfire and, of course, a stunning fireworks display.

Where to go in November

Whether you want to see the best fireworks in the country or escape the British weather, make your November trip a great one

You'll find some of the most unusual Bonfire Night celebrations in Ottery St. Mary at the unique Tar Barrels Festival. Thought to have begun as a pagan ritual that cleansed the streets of evil spirits, residents carry burning barrels of tar through the town's streets in a tradition older than the Gunpowder Plot.

There's also one of the biggest bonfires in the South West on the banks of the River Otter, a fireworks display and fairground rides and attractions to keep you entertained.

Lewes delivers a headline-worthy Bonfire Night thanks to the town's notorious processions. Controversial effigies depicting news events, politicians and everything in between are paraded through the town along with 17 large burning crosses, which coupled with the impressive fireworks display creates an unforgettable, lively atmosphere.

Families will love the LEGOLAND Fireworks Spectacular, which brings the theme park to life after dark across three days. After spending the day enjoying fun rides and attractions, finish it off with a bang and watch some of the best fireworks in the country.

Make sure to grab a pair of magic Brick glasses, which transform the incredible display into explosive LEGO bricks.

Watch the fireworks and stay overnight in a top hotel

Fireworks at the Fort, Newcastle

There can't be many more dramatic locations to marvel at the fireworks than at Segedunum Roman Fort, originally built to guard the eastern end of Hadrian's Wall. Spend the day exploring the large interactive museum and take part in family-friendly craft activities, before watching the sky light up over the River Tyne.

Want to learn more about the origins of Bonfire Night? The Gunpowder Plot Immersive Experience is perhaps the most memorable way to learn the history behind London's most famous rebellion.

Jacobean London is brought to life through live-action, VR and cutting-edge technology as you step into the world of Guy Fawkes. Go undercover surrounded by 'traitors' as you try to figure out who you can trust and discover the identities of the people behind the most infamous plot London has ever faced. Combine it with a relaxing stay in a top London hotel with our exclusive package, complete with breakfast the next morning.

Book The Gunpowder Plot with a Hotel Stay