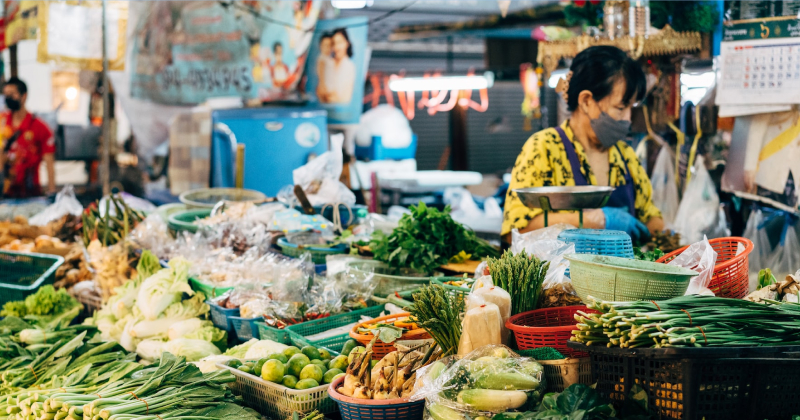 The best holiday destinations for vegans

Think travelling as a vegan is a challenge? Think again. Here's where you can find some of the world's best vegan dining options.

Buddhism is by far the most practised religion in Thailand, which is great news for vegan travellers – Thai Buddhists often avoid eating meat, so most restaurants offer vegetarian and vegan options to accommodate. The trick to veganise your meal is to ask for no fish sauce, which is a common ingredient in Thai meals.

For an incomparably diverse range of food offerings, Bangkok is your go-to destination in Thailand. Exciting flavours sing from the vegetable, rice and noodle-based dishes you'll find in high-end downtown restaurants and lively street markets. You'll never forget the sights and smells of Thailand's chaotic capital, which promises to be a spectacular adventure.

You don't need to travel far to explore animal-loving towns and cities, as the UK is the second-best destination for animal welfare on our Good Trip Index, close behind Luxembourg. So it's no surprise that London is a world-renowned vegan hotspot, home to hundreds of fully vegan restaurants and businesses.

You'll find the UK's first plant-based cheese shop, La Fauxmagerie, a thriving vegan pizza scene, plus burgers, chicken shops and countless multicultural dishes where meat is nowhere to be seen. Vegan shopping is easy too, with vegan supermarkets, clothing stores and even hair salons dotted all over the city.

Looking to explore the UK this year? Make the most of your trip by choosing an award-winning short break from Holiday Extras.

Like Thailand, Taiwan has a large Buddhist population who follow a vegetarian diet, plus many businesses go meatless for Green Monday, meaning there's plenty of demand for meat-free meals.

This is especially true in the food-obsessed capital Taipei, which features on countless lists for top vegan-friendly cities. The city boasts plenty of Michelin-starred restaurants, but perhaps the best place to taste your way through Taipei is at the buzzing night markets, where you can shop and feast till late. You're sure to find tasty vegan dumplings, soups and sesame noodles, as well as an infectious atmosphere.

When we think of German cuisine, sausage-based dishes like bratwurst, currywurst and bockwurst are usually the first things that come to mind. And sure, there's no shortage of wursts in Berlin, but this famous culinary export only scratches the surface of the German capital's diverse food offering.

Many argue that Berlin is the vegan capital of Europe, or even the world. The city boasts hundreds of venues that offer vegetarian and vegan options – for a taste of traditional German cuisine, delicious vegan kebabs and burgers are easy to find, or for something different seek out the Vietnamese-style restaurants that have been gaining popularity in recent years.

Culture capital. Party place. Historical hub. However you describe Berlin, there's something for everyone in the German capital.

A vibrant city covered in street art, the best coffee you'll ever drink, quirky shopping lanes to explore and a sport-loving haven for fans of Aussie Rules football, cricket, horse racing, grand-slam tennis and Formula One, you'll never be short of things to do in Melbourne.

Melbourne also happens to be home to some of Australia's coolest culinary spots, where vegan is firmly on the menu. The city is proudly multicultural, meaning you'll find a diverse range of dining options – head to the central business district for hole-in-the-wall restaurants serving up Chinese, Thai and Indian, Victoria Street in Richmond for Vietnamese delights and Lygon Street in Carlton for the city's most authentic Italian.

Melbourne is also the perfect place to discover Indigenous Australian ingredients, like pepperberries, quandong and finger limes. Wherever you go, chefs across the city champion locally grown fruits and vegetables, meaning a great vegan meal is never far away.

Austria comes in third place on our Good Trip Index for animal welfare, just behind the UK – the country has some of the strictest laws protecting animal rights in the world, and around 10% of the population eats a vegetarian or vegan diet, so vegan travellers will feel right at home.

You'll want to visit Austria's crown jewel, Vienna. Between parading through the capital's grand palaces and discovering world-famous museums and music venues, you can tuck into a bounty of vegan delights. While Austria's traditional dishes are typically meat-based, you'll find great vegan-friendly substitutes – don't leave without trying a vegan schnitzel!

Often cited as one of the greatest cities in the world, you name it and New York's got it – including amazing vegan treats around every corner.

For vegan fine dining, Eleven Madison Park won't disappoint. The three Michelin stars speak for themselves – this is sustainable American cooking at its finest, featuring creative plant-based courses and cocktails. If you're after something a little kinder on the wallet, you'll likely find every cuisine you can think of represented in this multicultural city, from meat-free burgers to fish-free sushi.

Home to world-famous landmarks around every corner, New York might just be the greatest city in the world. Why not find out for yourself?

Travelling in India as a vegan is a breeze. Vegetarianism has deep roots in Indian culture, and over 30% of Indians follow a vegetarian diet, so there are plenty of restaurants that offer meat-free options. Just look out for ghee, a clarified butter used instead of oil in many dishes, and the commonly found cheese paneer – both of these can easily be substituted out if you ask.

There's so much to see in India, but we recommend heading to the Golden Triangle. This popular route connects the capital, New Delhi, with Agra and Jaipur, meaning you'll be able to tick off many of the country's highlights, including the Taj Mahal. And on the way, you can tuck into delicious curries filled with lentils, beans, fresh vegetables and vibrant herbs and spices.