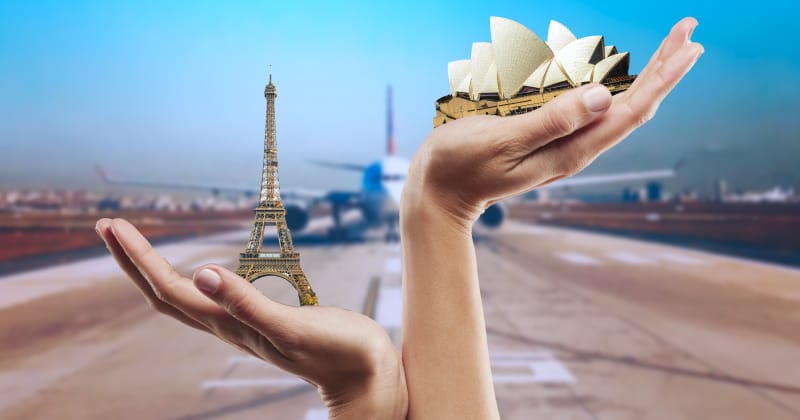 Short city breaks to Northern Europe are down, two weeks on a cheap beach is up, and Brits will sit on a plane for an hour and ten minutes for every night away.

After two years of interrupted travel, holidaymakers are getting out to see the world like never before and ticking destinations off their bucket lists – which means trips are getting longer and destinations are getting more interesting (as well as mostly cheaper!).

But how long is it really worth spending in the air to get a night away from home? And how far away will you get for every hour spent on a plane? We asked our customers and checked where they were going now, this is what we found out.

First, we asked UK holidaymakers how long they'd spend in the air for a night away. On average they told us they'd spend 1 hour 10 minutes in the air for every night away – but that varied a lot from shorter trips to longer, with holidaymakers willing to spend three hours flying for a weekend city break, four for a long weekend, six for a week's holiday and nine hours for a fortnight away.

For a weekend, three hours puts almost all of northern and western Europe in reach, plus the edge of Africa. Amsterdam, Krakow, Reykjavik, Sofia and even Tunis are less than three hours away, making for a viable weekend break.

For a long weekend, that extra hour will get you to the nearer Greek islands, to Seville in Andalucia, to Marrakech or to Istanbul.

For a week away, people tell us they'll fly for up to six hours. That gets you as far as anywhere on the Turkish riviera, as far south as the Canary Islands, Senegal or Nigeria or as far east as Amman in Jordan (plus, of course, all the destinations we've already looked at that are closer!).

For two weeks or more the only place that's still potentially impractical is Australia or New Zealand, which people tend to book off three or more weeks to see.

The second big trend we've seen this summer is people changing destinations. Partly because they're going away for longer, partly to save money and partly just to see new and exciting places – the top destinations have changed a lot since pre-pandemic. The Greek islands, the Turkish riviera and relatively new routes to eastern Europe have all rocketed in popularity this year as people look for somewhere different on a budget. If that's you, we've pulled together some suggestions for hassle-free destination swaps you might want to try for your next holiday.

Our guide to swapping those expensive destinations we've all got used to for somewhere different and cheaper.

The final change in holiday habits this year is that trips of 3 and 4 days are down on 2019, holidays of 10 days or more are up. That means the traditional city break destinations an hour or two away are seeing fewer visitors, but the Greek islands, Turkish riviera and a handful of exotic breaks are seeing a lot more.

If you want to know where's up and where's down so you can follow the crowd (or avoid them, if that's more your thing!) - here are the biggest changes so far this year.

The best of the best – white-gold sand, clear blue waters and som tum on the beach.


The biggest fallers this summer were a combination of places that are still closed or all-but-closed – India, with its visa complications, domestic flights within the UK, which are down across the board, and traditional city breaks to France, Germany and western Europe.


With travel back to normal, and many people looking to economise, the most popular new budget destinations are likely to sell out long before next summer – so if you're hoping to head out to one of the newly popular beach or city breaks, best book ahead!