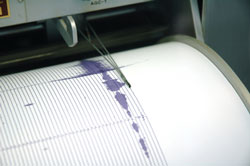 The UK's largest earthquake in nearly 25 years hit during the early hours of this morning.

Measuring 5.2 on the Richter scale, the British Geological Survey (BGS) recorded the event at 12.56 am with its epicentre near Market Rasen, Lincolnshire. However, it is thought that its effects were felt in various locations across the country.

“This is a significant earthquake for the UK and will have been widely felt across England and Wales”.

The BGS was inundated with calls from the public, media and emergency services throughout England. According to the Guardian, England's emergency services received more than 1,000 calls from people who had experienced the tremor. The most common reports were of damage to roofs, chimneys and garden walls. The newspaper spoke to one person who was injured, student Paul Bates who suffered a suspected broken pelvis.

The BGS records around 200 earthquakes in the UK every year with approximately 25 of those being felt by people. Earthquakes of this size occur in the mainland UK roughly every 30 years, but are more common in offshore areas. In 1984 the Lleyn Peninsula earthquake was recorded at magnitude 5.4 in the UK.

Some of the most active seismic regions in the world include China, California in the United States and Indonesia. The 1976 Tangshan earthquake took 250,000 lives. California has experienced numerous earthquakes over the centuries, the most famous being in 1906 in San Francisco. A massive tremor under the Indian Ocean caused the Asian tsunami of 2004 which killed more than 200,000 people from around the world.