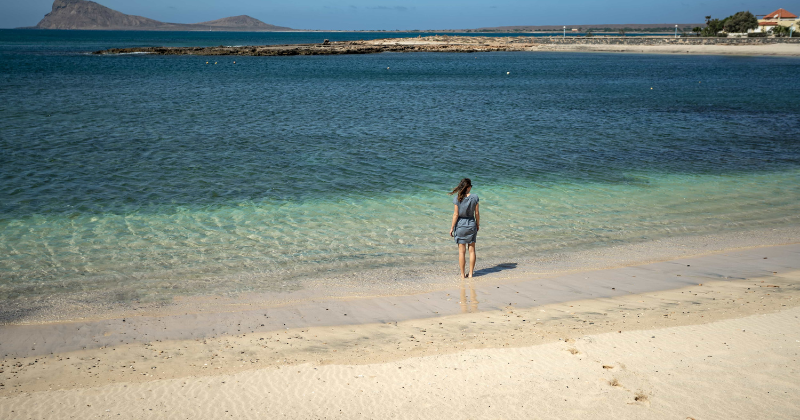 Not quite African, not quite Portuguese. The islands of Cape Verde are as stunning as they are mysterious. Expect Beautiful beaches, sparkling seas, glorious sunshine, fresh fish and exotic adventure as we tell you everything you need to know before you go.

Getting to Cape Verde

Getting around Cape Verde

Top things to do in Cape Verde

What to eat in Cape Verde

What time is it in Cape Verde?

What currency do they use in Cape Verde?

What language do they speak in Cape Verde?

What power adapter do you need for Cape Verde?

Type C (the same as most of mainland Europe)

How long is the flight to Cape Verde?

Some facts about Cape Verde

The Cape Verde archipelago is made up of ten islands and five islets. Despite being one of the smallest islands, Sal is by far the most popular with tourists.

Cape Verde was uninhabited until it was discovered and colonised by the Portuguese in the 15th century. It achieved independence from Portugal in 1975, and in recent years has seen a huge tourism boom.

The official language is Portuguese. But the unofficial one spoken by most, if not all, is the Cape Verdean Creole. It's also known as kabuverdianu or simply called "Creole" or "Kriolu".

With a fairly consistent tropical climate, you can expect temperature in excess of 24°C throughout the year.

Cape Verde has almost no rainfall at all for nine months of the year and the remaining three months (August to October) still experience low rainfall. That means you can leave the brolly at home!

Getting to Cape Verde

Can you fly direct to Cape Verde?

Given its position in the middle of the Atlantic, the best way to reach Cape Verde is to fly. The archipelago has 5 international airports, but if you're flying direct from the UK, you'll likely arrive in either Sal or Boa Vista. Flights take 6 hours, about two hours longer than a trip to the Canary Islands.

Getting around Cape Verde

Our Cape Verde transfers serve both main airports on Sal and Boa Vista. Our private transfers all have professional drivers, who will meet you in arrivals and chauffeur you to wherever you're staying.

Taxis operate in most major destinations, particularly around airports. Fares should be agreed in advance, so make sure you know how much you'll be charged before you hop in. Most drivers will speak English too.

If you fancy travelling like a local, consider island hopping on one of the daily ferry services. You'll be able to find services to and from most of the inhabited islands, with journeys taking about an hour each way.

Just be aware that sea conditions around Cape Verde are sometimes treacherous, due to many submerged rocks. This means services can be cancelled or delayed in poor weather, so make sure to check the forecast ahead of your trip.

As of 2017 the airline Binter Canarias handles domestic flights in Cape Verde from island to island.

Book your Cape Verde Airport transfers, with prices starting from just £3.62 and free cancellations up to 3 days before travel on a top range of shuttles, private transfers and taxis from Amílcar Cabral International Airport on Sal and Rabil Airport on Boa Vista.

Top things to do in Cape Verde 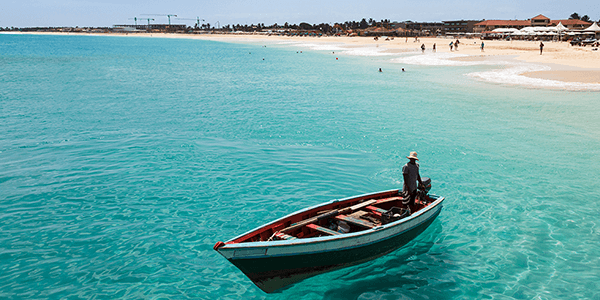 One of the most popular things to do in Cape Verde is hit the beaches, and you're definitely spoilt for choice. The most popular is Sal's Santa Maria, which is the best beach for swimming and water sports.

If you'd like a more relaxing beach, Praia de Santa (also on Sal) has endless golden dunes to enjoy, and if you're lucky you might even spot wild turtles bobbing in and out of the water.

The other islands boast equally impressive beaches too, from the bird-watchers paradise of Maio to Boa Vista and its excellent windsurfing conditions. 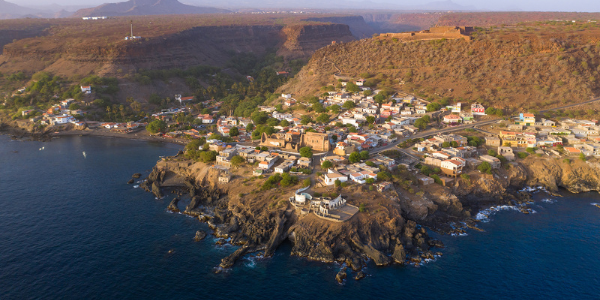 If you're looking to explore the history of Cape Verde, a visit to the town of Cidade Velha has to be on your list. This is the oldest place on Cape Verde, having been established in 1462 with the first Portuguese port.

Overlooking the town is Sao Felipe Fort, built in the 16th century to fend off swashbuckling pirates. On the way up to the fort, you'll also find find Nossa Senhora do Rosário, the first Christian church to be built in West Africa. The place is now an official UNESCO World Heritage Site. 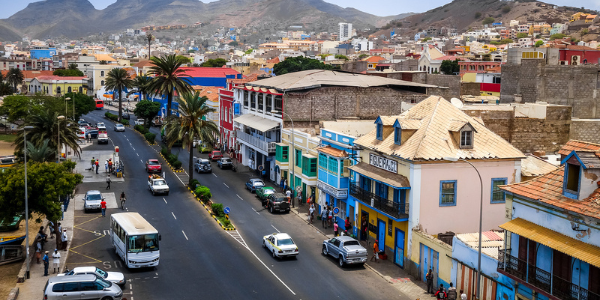 Mindelo on the island of Sao Vicente is one of the best places to experience authentic Cape Verdean culture. The town is packed with colonial architecture, cafes and restaurants, as well as local musicians providing the perfect soundtrack to warm summer evenings. Visitors also have the chance to watch local craftspeople producing ceramics and weave cloth.

If you venture north out of the town, you'll find a natural lagoon in Baia das Gatas, a great place to swim and cool off after a day of exploring Mindelo.

What to eat in Cape Verde

When it comes to food, a standard dish that you'll find in most restaurants is fresh fish with potatoes or rice, which might sound a little dull, but tasting is believing. Most waterfront restaurants will be serving their catch of the day, and that freshness translates into flavours you'll struggle to find anywhere else in the world.

If you're vegetarian there isn't as much choice as you might find at home, but plenty of restaurants serve pasta and pizza.

The islands of Cape Verde compared 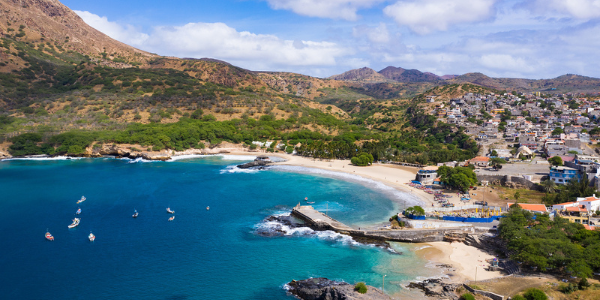 Cape Verde's largest island contains the current capital Praia and the old capital, Cidade Velha, with its great hill fortress Fortaleza Real de São Filipe. More than half of the nation's population live on Santiago. With history and culture aplenty and a largely African feel, Praia is the place to come for vibrant African markets, live music and nightlife.

Santiago is probably the most diverse of the islands when it comes to landscapes, with fine white-sand beaches, two mountain ranges, and fertile valleys, all providing incredible scenery and fantastic hiking trails. You'll also find the largest and oldest tree in Cape Verde here, a 40-metre kapok which has been around for over 500 years. 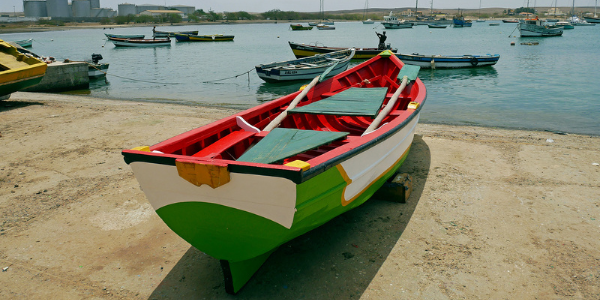 Sal is Cape Verde's most popular island for visitors who come for the gorgeous beaches and watersports (surfing and diving in particular). The distinctive landscape also features the Pedra de Lume salt pans and Buracona with its natural swimming pools and underwater caves.

Pretty, characterful cobbled resorts like Santa Maria offer long and wonderful beaches, surf shops, cafes and restaurants. Espargos, the island capital, is a bustling centre and home to the international airport, while Porto de Palmeira is a picturesque harbour town with a Portuguese flavour. 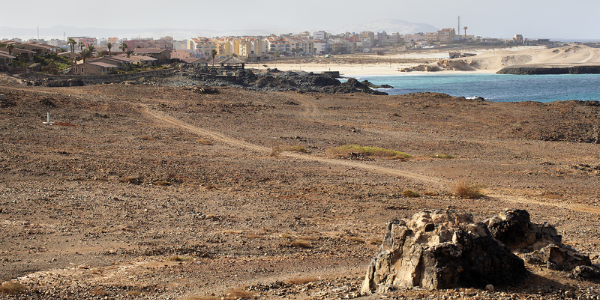 Boa Vista also stands out thanks to the shifting white dunes of Praia da Chave, the protected loggerhead turtles nesting on many of the island's beaches, and the lovely (and only proper) town, Sal Rei. The off-road adventure opportunities to explore the island's desert interior are another great reason to stop here. 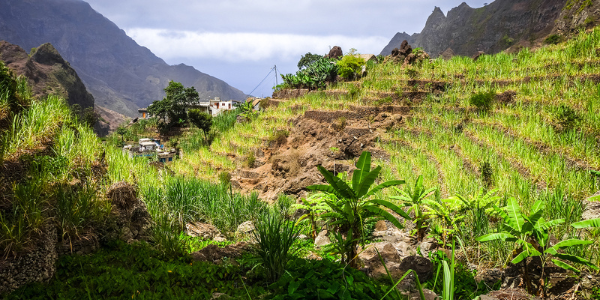 Rugged mountains, pine-topped hills, canyons, knee-trembling ravines and unexpectedly lush valleys of sugarcane plantations and wild flowers make Santo Antão a hiker's paradise. Most travellers head to the north east of the island, but the west is worth exploring too. Take a ride from Porto Novo to Ribeira Grande on the old cobblestone road to really appreciate the contrasts of Santo Antão, travelling through towering rocky peaks, verdant forest, mountain ridges, volcanic craters and terraced plantations. 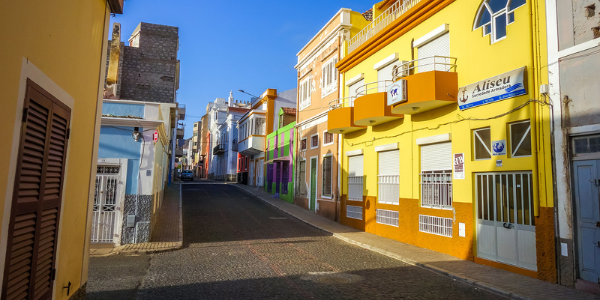 Aside from the vibrant Mindelo, São Vicente as a whole is dusty and mountainous. Nearby Santa Luzia is the country's smallest and only uninhabited island, with spectacular deserted beaches and dunes. It's possible for intrepid travellers to search out a friendly fisherman in Calhau to give them a ride. 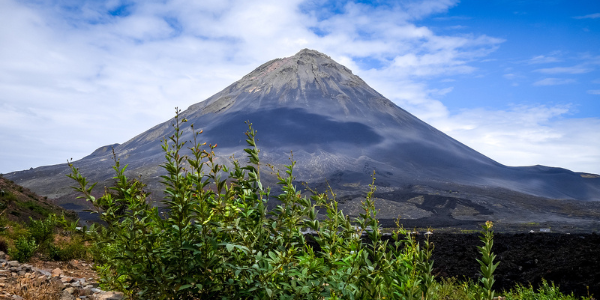 Dominated by a huge black volcano, Fogo translates appropriately as 'fire'. Pico do Fogo reaches 2,989 metres above sea level, and is very much alive and kicking having last erupted late in 2014. Up until then, a community of more than a thousand lived close to the crater in a settlement named Cha das Caldeiras. They were descendants of a Frenchman who introduced grapevines to the island in the 19th century, and continued to produce local wine.

The town is still in the process of being rebuilt, and local guides will still take visitors on hikes up the volcano. The colourful towns of São Filipe (the capital) and Mosteiros are also worth a trip. 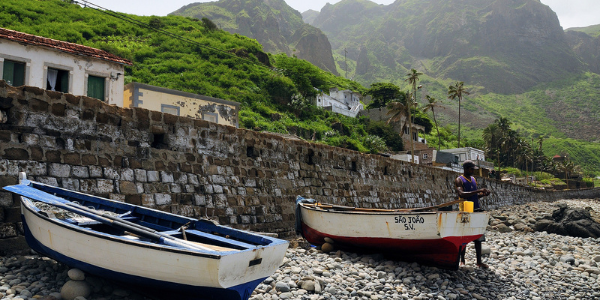 Travel back in time on this sleepy cobbled island with its terraced farmland still worked by mules. The smallest of the populated Cape Verde islands, Brava has few overseas visitors, yet its dramatic coast of craggy cliffs, rocky coves and mighty mountains further inland are very impressive. And in contrast to most of the other dry and barren isles, Brava is lush and tropical allowing date and coconut palms, oleander bushes, hibiscus, almond trees and bougainvillaea to thrive. Short hikes from the beautiful little capital Vila Nova Sintra are a joy. 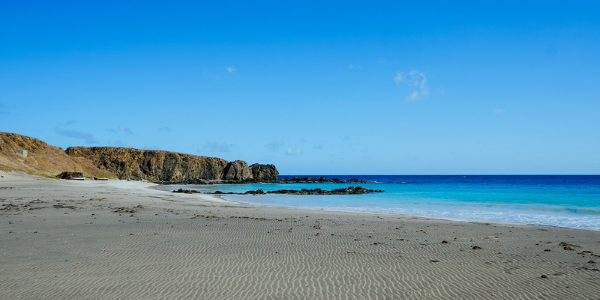 So far almost untouched by development and tourism, São Nicolau is a lush and fertile island with mountains perfect for hiking and mountain-biking, and rich waters ideal for sea fishing. Maio has secluded beaches and native birdlife, from coursers and ospreys to bar-tailed larks and swallows.

Cape Verde is welcoming to everyone who wants to visit, but its sometimes rugged landscapes and developing infrastructure might not be accessible to all travellers.

Make sure your hotel or resort can cater to your needs before you book your next trip.

Cape Verde is safe for LGBTQ+ travellers, and is one of the most accepting destinations in Africa.

São Vicente is known for being very welcoming to the LGBTQ+ community – keep an eye out for Pride events throughout the year.

If you're looking to have a sustainable trip to Cape Verde, consider a stay on the island of Boa Vista rather than the more popular Sal. Not only will this help to prevent overtourism, but you'll also find more eco-conscious hotel choices.

That's because our friends at the Travel Foundation have been there to start the Greener Hotels project, which has helped the local tourism industry to take steps to be more mindful of their environmental impact.

Take a look at our guide on sustainable tourism or how to reduce your travel footprint if you want to know more. There really are a lot of little things you can do to make your trip as green as possible.

Is it worth going to Cape Verde?

Absolutely! If you're looking for an alternative beach holiday destination, there aren't many better options than Cape Verde.

With almost guaranteed sun whenever you visit, friendly locals and projects in place make tourism a force for good, it's definitely one to add to your bucket list.

How safe is Cape Verde?

Cape Verde has a stable political and economic system, making it one of the safest destinations in West Africa. You shouldn't fear prejudice or discrimination while you're there.

Do I need a visa to visit Cape Verde?

Visitors from the UK can enter Cape Verde as a visitor for up to 30 days.

But before you travel, make sure to register with the Cape Verde authorities on the EASE website and, if arriving by air, pay the Airport Security Tax (TSA) of 3,400 escudos (approximately £30). This does not apply to visitors under 2 years of age or permanent Cape Verde residents.