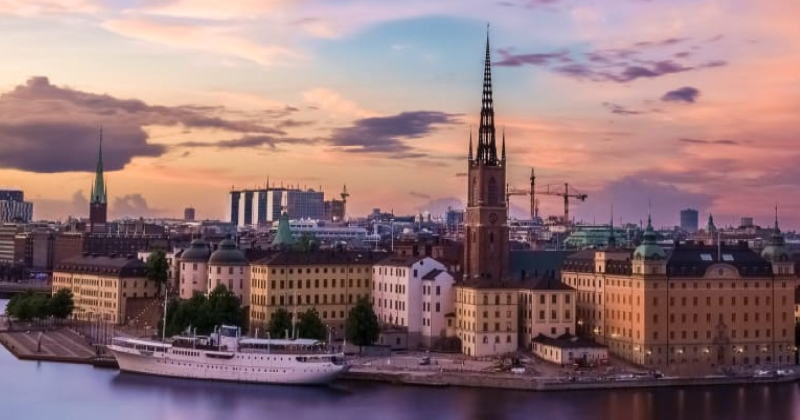 Sweden takes the top spot in our Good Trip Index, meaning it's the greenest, safest and most welcoming country in the world. According to us at least. It's also filled with beautiful landscapes, historic cities and rugged wilderness.

Top things to do in Sweden

Where to stay in Sweden

What to eat in Sweden

Top things to do in Sweden

What time zone is Sweden in?

What curreny do they use in Sweden?

What language do they speak in Sweden?

What power adaptors do you need for Sweden?

What is the average fight time to Sweden?

Some facts about Sweden

Sweden is one of those countries that has a bit of everything, something to suit everyone. And we're not just saying that. Depending on which part you go to, and the time of year you visit, Sweden offers a dazzling combination of stylish cities, traditional settlements, mountains, cliffs, and chilly Arctic tundra.

And forest. In fact, around 78% of the land in Sweden is covered by forest, which is part of the reason why they have what's called the Ällemansratten, or the everyman's right. This law allows anyone to access privately owned and public land for recreation, as long as they don't damage it or infringe on anyone's privacy.

Similar to the UK, Sweden has a constitutional monarchy, with the prime minister as head of government, and the king or queen as head of state. The current king of Sweden is Carl XVI Gustaf – he took to the throne in 1973 and is the longest-reigning monarch in Swedish history.

Just over half the population is part of the Church of Sweden.

Do you need tip in Sweden? Tipping isn't expected in Sweden but it's always welcome. Typically you can round up the bill for good service.

Smoking is banned in enclosed public spaces including restaurants, bars and public transport.

The official language is Swedish although English is taught from a young age at school. There is also a community of Sami, people indigenous to Scandinavia, who live in Lapland to the north and speak Lule Sami, North Sami or South Sami.

My name is - Jag heter

How much is it? - Hur mycket kostar den?

For any emergency, including mountain rescue, call 112.

Sweden's temperature varies a lot throughout the year, though being in northern Europe it leans more towards the chilly end of the thermometer. In the summer, Stockholm averages at around 23ºC – similar to temperatures in southern England but with longer days. Winter in Stockholm can drop to as cold as -5ºC and doesn't get much warmer than 4ºC.

But that's mild compared to how cold it gets in the north. With part of Sweden within the Arctic Circle, it can get to -30ºC in the middle of winter up there, though it still gets up to around 20ºC in summer.

With four distinct seasons, when you visit Sweden depends entirely on what kind of trip you're planning.

For a city break, you're better off heading there in the summer months (late May to early September). It's warm, and the days are much longer so you can cram in plenty of sightseeing.

The temperature is a bit lower during the spring and autumn months, which lends itself perfectly to hiking and exploring Sweden's gorgeous scenery. Plus there are fewer people using the trails.

Winter in Sweden opens the door to a wonderland of fun, with opportunities for dog sledding and long nights in search of the Northern Lights. It also has a lengthy ski season, falling between November and March, with quieter resorts than you'd find throughout the rest of Europe.

Flight times vary depending on where you're going, but you're typically looking at around 2 hours and 30 minutes from London to Stockholm, or just under 2 hours if flying to Gothenburg.

You can also reach Sweden by train. It takes a fair amount longer but the journey will take you through Belgium, Germany and Denmark and it's much more eco-friendly than flying. If this is something you're considering it's worth looking into getting yourself a rail pass. Both InterRail and Eurail Pass offer unlimited travel in most European countries.

Sweden is also a very popular cruise destination, and this is an easy way to see cities like Stockholm, Gothenburg and Visby.

If you're in Stockholm it's relatively easy to get around the city using their metro system which is called the T-bana. Just keep an eye out for the blue T signs. There are also vintage trams that run from the city centre in the summer.

If you're venturing outside the city there's an efficient train network with hubs in Stockholm, Gothenburg and Malmö. Take the journey on a high-speed train up to the Arctic Circle, making the most of the absolutely stunning views and refreshing yourself in the bistro car.

Driving is an option too, with car hire available in major cities. There are some congestion charges you'll need to be aware of, especially in Stockholm and Gothenburg. This may be added to the rental cost but it's worth double checking when you collect the car.

Best Places to stay in Sweden

Sweden has a holiday for everyone, whether it's a city break, a seaside stay or an adventure in the Arctic.

Stockholm is probably one of the most popular destinations to stay in Sweden – it's the capital city, there's plenty to do and it��s the perfect springboard for starting your Swedish adventure.

Stay in the heart of the old town, Gamla Stan, which overlooks the harbour and is filled to bursting with old buildings, restaurants and museums. Or head to Vasastan for its wide-open parks and animated bars. For nightlife you'll want to go to Östermalm – this part of the city is a bit fancy and as well as the Stureplan nightclub district, it's where you'll find all the best shopping.

The thing about Stockholm is that everything is within easy reach whether you want to get around on foot, by boat or using the metro.

We've got plenty of tips for things to do in this fabulous city if you want to find out more. 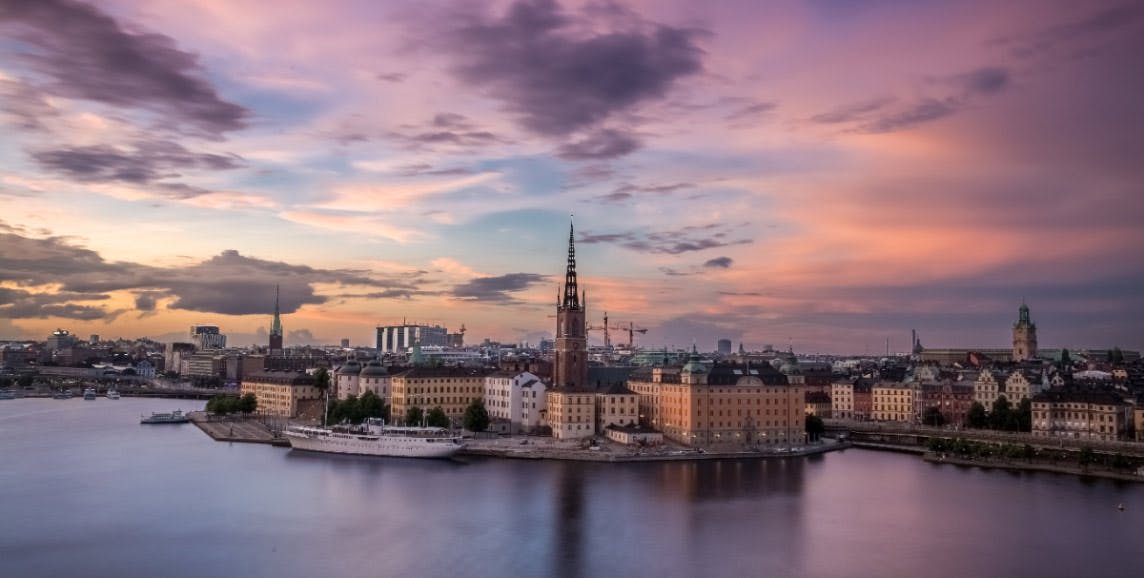 Gothenburg is Sweden's second-largest city and lies on its west coast. In 2021 Lonely Planet recognised the city as the 'best sustainable city stay' so it gets extra double bonus points from us.

The city is ideal for a break by the sea, with great access to channels and waterways that are ideal for kayaking, swimming, guided fishing trips and even lobster safaris. Gothenburg is also the birthplace of Volvo and there's a museum dedicated to the famous car manufacturer. If that's what you're into.

Another thing the city is famous for is being a hotspot for craft beer and ale, with a hefty handful of breweries offering up countless organic beers for you to try. 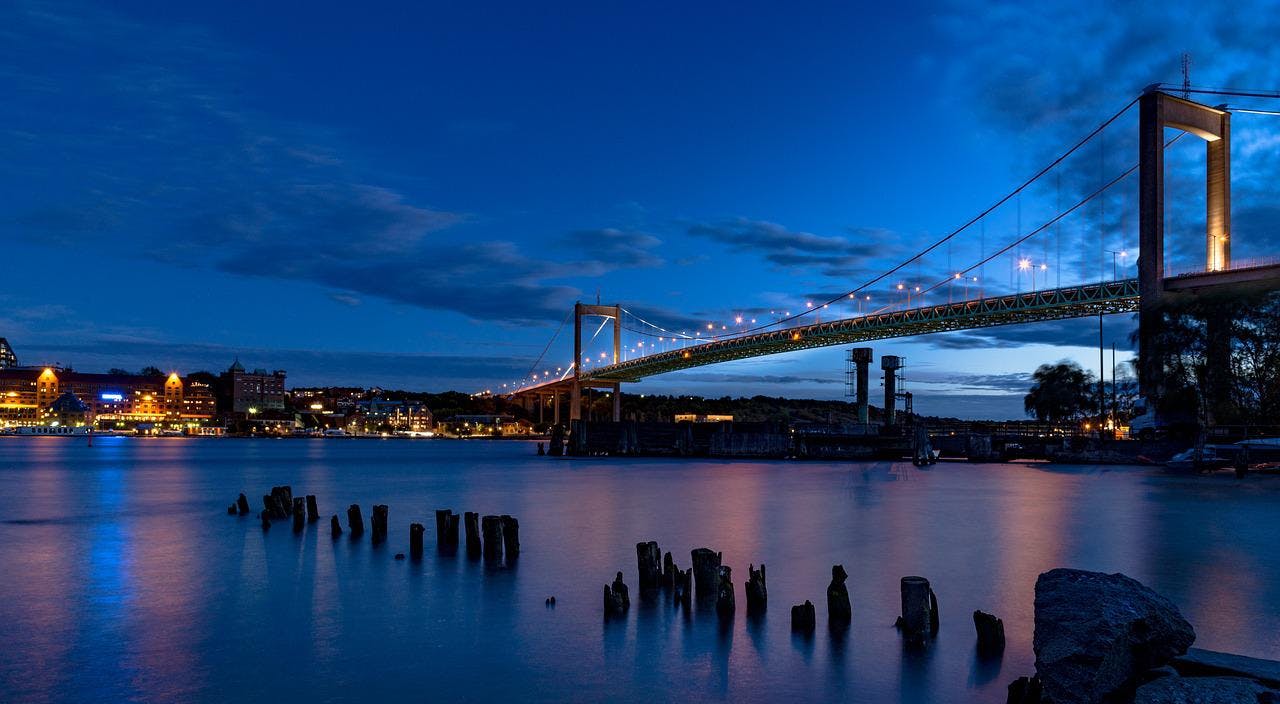 In some parts of Swedish Lapland there are more huskies than people.

Did you want more reasons to stay there? How about it being the best place in the country to experience the midnight sun, or see the Northern Lights? If you're after a real Arctic adventure this is where you need to go.

That's not to say you can't visit during the warmer months too, as the region has a huge range of different terrains perfect for hiking, fishing and generally exploring. 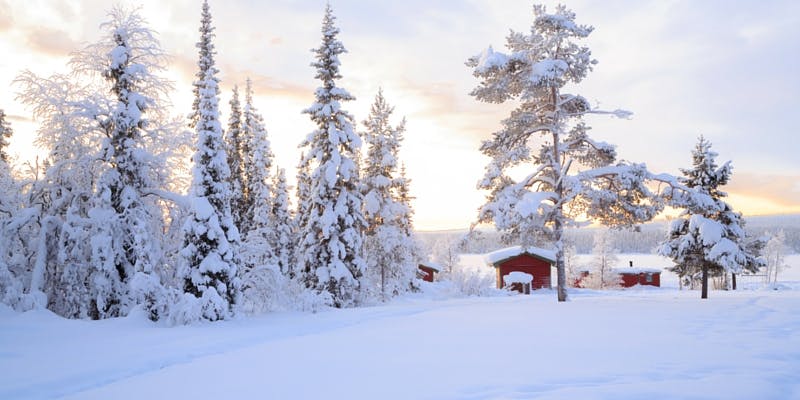 Though it's technically in Lapland, we thought this hotel warranted its own section because it's literally a hotel built from ice.

Every year when winter arrives, the hotel is built from blocks of ice hewn from the frozen River Torne. And then every spring it melts away until winter rolls around again.

Don't worry though, as there's also a year-round version of the hotel where you can enjoy the same experience of sleeping in -8ºC temperatures on a bed made from massive ice cubes under cosy reindeer hides – without worrying about it melting on top of you.

There are also more traditional hotel rooms and chalets here if you want to make the most of the area and you don't warm to the idea of sleeping in freezing temperatures.

What to eat in Sweden

There's a smorgasbord of different dishes to try when you visit Sweden, extending far beyond those classic meatballs.

One thing you won't be able to avoid is the Kanelbulle, a type of cinnamon bun with a toffee glaze and pecan nuts. They also come in vanilla, cardamom and saffron varieties. It's a popular choice for a fika, which is the Swedish tradition of relaxing with a coffee and a sweet treat.

Fan of fish? You'll be right at home in Sweden, where bumper hauls of Baltic herring are the norm. They're enjoyed pickled, marinated, curried or breaded and fried. Or if you're feeling brave try it fermented.

Another favourite is kroppkakor. These big dumplings are made from boiled potato with a filling of fried pork and they're usually served with lingonberry sauce.

Sweden is keen to make sure everyone has the same experience when they visit, whether it's to explore the city streets or even to enjoy the excitement of winter activities.

Public transport throughout the country is adapted for wheelchair users, and most attractions and museums are fully accessible. If you're visiting Stockholm, here's a a list of attractions and the facilities they can provide.

If you want to go skiing we'd recommend heading to the Sälen or Are ski resorts. They offer specialised adaptive skiing and one-to-one lessons on how to use a sitski – this is a chair mounted on skis that can be steered by a guide, or the occupant using ski poles.

Sweden prides itself on its LGBTQ+ rights, from the decriminilisation of homosexuality way back in 1944 to the legalisation of same-sex marriage in 2009. The government continues to ensure everyone has the same rights regardless of how they identify or who they love.

You'll be welcome wherever you go and if you want to experience pride, Stockholm hosts the biggest one every July-August. You can expect fascinating exhibitions and lectures along with themed club nights, parties and a fabulous parade.

It's easy to have a sustainable trip in Sweden – that's one of the reasons it's at the top of our Good Trip Index.

One of the best ways to experience green Sweden is with a visit to Gothenburg, which was recognised as the county's most sustainable city by Lonely Planet in 2021. This is because around 97% of the city's public transport runs on renewable energy and 95% of the hotels there have eco-certification.

There's also a big focus on making everything green throughout the city, whether it's trips to the stunning countryside and coast surrounding the city, the food you can eat or where you choose to stay.