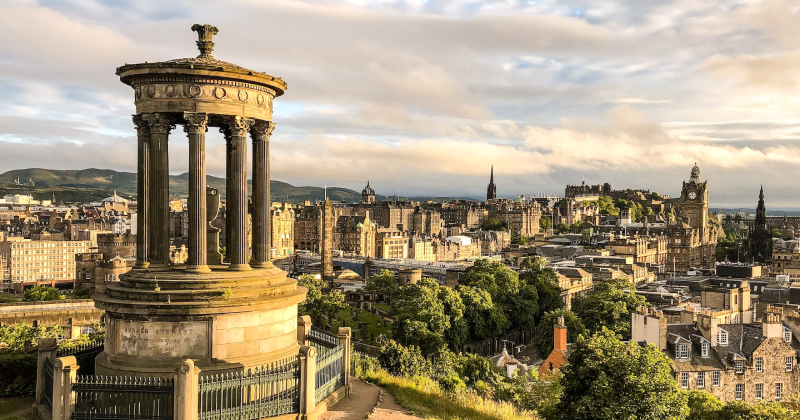 Edinburgh's compact size combined with its high concentration of attractions make it ideal for a short break in the city. And with the Holiday Extras travel guide you'll know how to make the most of your time in this fascinating, historic city.

Top things to do in Edinburgh

When to visit Edinburgh

Top things to do in Edinburgh

What time zone is Edinburgh in?

What currency do they use in Edinburgh?

What language do they speak in Edinburgh?

What power adaptors do you need for Edinburgh?

What is the average fight time to Edinburgh?

The most common religion is Christianty and the Church of Scotland.

Similar to England, tipping of 10-15% in restaurants is normal where a service charge isn't included. Feel free to tip your taxi driver too.

Smoking is banned in all indoor public spaces.

Edinburgh is the capital of Scotland and lies on the shores of the Firth of Forth – an estuary connected to the North Sea. It's the seat of the Scottish government, home to palaces, monuments, gorgeous gardens and a heritage so important it's recognised by UNESCO.

The city is built on seven hills (a bit like Rome), although there's some debate over what the seven hills actually are. Most people do agree however that the most popular is Castle Rock – the extinct volcano upon which Edinburgh Castle perches.

The city itself is made up of Old Town, the original settlement which includes the castle and the old buildings around it, and New Town which was built in the 18th century as the city grew.

A handy way to get your bearings is to jump on a hop-on hop-off bus tour of the city. With multiple routes to choose from and dozens of stops it's an easy way to get around the city and tick its many attractions off your list. You can buy tickets for up to 24-hour periods, and they are unlimited during that time.

Or you might like to see the darker side of the city, supposedly the most haunted in Europe, on an ooky spooky Ghost Bus Tour. This 75-minute tour takes place on a vintage double decker and teaches you all about the city's grave robbers, plague victims and the ghosts that call it home.

Edinburgh's historic atmosphere and small size make it perfect for getting around on foot too – it's probably one of the best ways to get a real feel for the city as you explore the cobbled lanes and traverse the length of the Royal Mile.

If you end up needing to get somewhere a little further afield that isn't on the tour bus route, then the city has a super efficient public bus service that operates 24 hours a day.

There's also a tram service which has one route connecting the airport to New Town, so it's handy for getting into the heart of the city if you're flying in – but if you're looking for a way to get around you're probably better off using the buses.

The UK ranks 15th on the Good Trip Index

A guide to Edinburgh's attractions

Everyone loves a trip to the zoo! Edinburgh Zoo is home to a huge community of animals – including the UK's only Giant Pandas, Tian Tian and Yang Guang. Pay them a visit along with a colony of koalas that live in a eucalyptus garden, and a waddle of penguins that like to play, paddle and slide around in their aquatic enclosure.

The zoo isn't just home to exotic animals either. It boasts a large garden filled with more than 120 different species of tree, and various displays of flowers, ferns and plants that change with the seasons.

Edinburgh Castle is one of the oldest fortifications in Europe, with the original fortress dating all the way back to the iron age. Little of that original hill fort remains but the castle has been there in some form ever since.

It's been home to the kings and queens of Scotland, a prison of war, and even a military hospital. And it houses the Scottish crown jewels, or Honours of Scotland, which are the oldest crown jewels in Britain. You can also see the Stone of Destiny, traditionally used in the coronation ceremonies of the Scottish monarchs, and later those of the monarchs of the UK – including for Queen Elizabeth II in 1953.

The castle is also famously perched upon an extinct volcano, or rather a volcanic plug, giving it a dramatic and iconic appearance looming over the skyline of the city.

The fascinating Museum of Scotland has a ton of interesting galleries, covering a vast range of subjects including the country's history through the ages, natural history, art and design, and even fashion.

The museum also boasts one of the UK's finest collections of artefacts from Ancient Egypt and East Asia, with dedicated galleries for both. In the Ancient Egypt Rediscovered gallery learn about daily life in that mysterious age, see a collection of ornate coffins and a beautiful gold ring thought to have belonged to Queen Nefertiti.

The Exploring East Asia exhibit has one of the largest collections from China, Japan and Korea, including ceramics from the Ming Dynasty, artwork and earthenware.

The Royal mile runs through the heart of Old Town and links Edinburgh Castle with Holyrood Palace – the king's official residence in Scotland. It's made up of the four streets that run almost exactly one mile between these two royal locations.

As you probably guessed, it's filled with historical attractions and buildings, including the 19th century tenements that tower over it, which were built after the original buildings burnt down in the Great Fire of Edinburgh. See the 14th-century St Giles' Cathedral and contrast it with the more modern Scottish Parliament building.

While you're here you can also visit the Grassmarket, which began life as a medieval marketplace where public executions would also take place. These days you won't be able to catch a beheading, but you can pay a visit to the fashion boutiques and old pubs, some of which were visited by historical figures like Robert Burns.

Holyrood Palace, or the Palace of Holyroodhouse as it's properly known, is the official residence of King Charles III when he visits Scotland – His Majesty spends a week here every year to carry out a number of royal engagements.

It has links to many historical figures from Scotland's past, including Mary Queen of Scots, who inherited the Scottish crown at just six days old! She would later be caught up in a plot to assassinate Queen Elizabeth I and beheaded! You can visit her chambers which are in the oldest part of the palace.

You can also see the throne room and privy chamber, where the King has audiences with the Scottish first minister.

One of the seven hills of Edinburgh, Arthur's Seat is part of an ancient, extinct volcano along with Castle Rock and Calton Hill. Its imposing, craggy appearance is an iconic feature of Edinburgh, and the views from the top make it worth the climb – you can see the city, across to Edinburgh Castle and the waters of the Firth of Forth.

According to legend, Arthur's seat is (possibly) the location of Camelot, the court of King Arthur and his Knights of the Round Table.

The hill is located within Holyrood Park and there's a popular walking trail which takes you past Salisbury Crags – the rugged cliff faces of the hill – and up the slopes, making the most of the stupendous views. Be sure to visit the well-preserved hill fort here too, it dates from around 2,000 years ago.

Part of the Trossachs National Park, Loch Lomond is in what's known as the Highlands in Miniature because of the incredible combination of mountain peaks, rural villages, castles, ruins and the loch itself.

Pay a visit to the quaint village of Luss, which dates from medieval times. Admire the unique slate cottages, head to the 19th century parish church to see the lovely stained glass windows, or simply take in the stunning views over Loch Lomond.

When is the best time to visit Edinburgh?

This really depends on what you want to get out of your visit – the weather can be unpredictable so it might not be a good idea to try and plan your trip around it. Instead, why not time your visit to coincide with the numerous events that happen in and around the city throughout the year?

Summer is a good time to visit, especially in August when festivals fill up the calendar. The famous Edinburgh Fringe Festival is perfect for comedy lovers, or visit during the Edinburgh International Festival for the best theatre, dance, music and opera from all around the world.

The Royal Edinburgh Military Tattoo also takes place in August. It's an annual ceremonial display by armed forces from across the Commonwealth that takes place in the Edinburgh Castle esplanade.

While it may be super cold if you visit in winter, you can fortify yourself with a dram of whisky during the annual Hogmanay celebrations – it's also the perfect opportunity to try some authentic Scottish haggis!

Or join in January's Burns Night celebrations, marking the birthday of famous Scottish poet Robert Burns. It typically involves a lot of eating, drinking and singing.