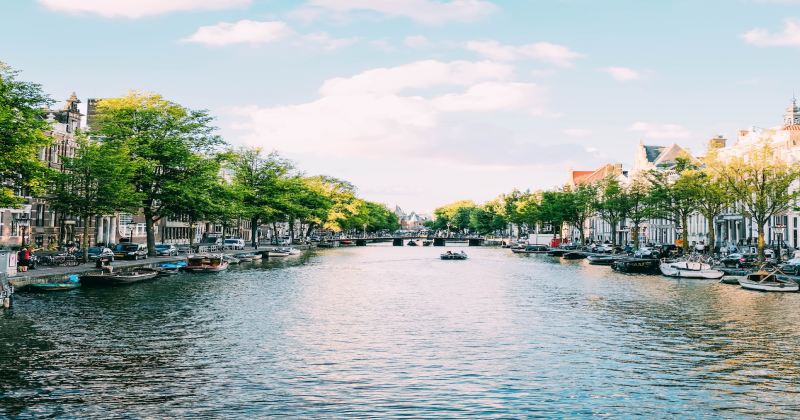 Hello and welcome to our Amsterdam travel guide – the best place to find out everything you need to know before you go.

Top things to do in Amsterdam

Best places to visit in Amsterdam

What to eat in Amsterdam

Top things to do in Amsterdam

What time zone is Amsterdam in?

What curreny do they use in Amsterdam?

What language do they speak in Amsterdam?

What power adaptors do you need for Amsterdam?

What is the average fight time to Amsterdam?

Amsterdam is the capital city of the Netherlands, located in the North Holland province, which is found in the North West of Europe.

Amsterdam is one of the most popular destinations in Europe as millions of people are drawn to the laid-back culture, hundreds of museums, galleries and the famous coffee shops and Red Light District.

But before you head off on your Amsterdam city break, here's the lowdown on all the city's hidden gems, like where to get the best food and proper bicycle etiquette.

You can catch a direct flight to Amsterdam Schiphol airport from all over the UK, with flight times taking around 1 hour 20 mins.

Or getting to Amsterdam from London by train is a breeze. You can hop on the Eurostar from London St Pancras International and be in the city in about 4 hours.

Getting from Schophol Airport to Amsterdam:

Train - From Schiphol, we recommend getting the NS train from just outside the arrivals lounge. Single tickets cost around €5, taking roughly 18 minutes to reach Amsterdam Centraal. From there, you're right in the middle of the city, near most of the major hotels and the city's attractions.

Bus - To get to Amsterdam from Schiphol Airport by bus, take the Amsterdam Airport Express on Line 197 from just outside the airport to the city centre. The bus departs every 15 minutes and costs around €10 for a return, but in our experience it can get very busy, which isn't ideal if you're lugging around a heavy suitcase.

Taxi - If you're looking to get a taxi from Schiphol Airport to Amsterdam it's worth remembering that they can be very expensive and can cost up to €50 for a single journey. Make sure to only use official taxis as anyone offering taxis inside the airport could be trying to scam you. Alternatively why not get about in style and book a hire car to explore the city's surrounding area.

Now it's time to start exploring all the amazing things to do in Amsterdam. Here are some of our picks for the best ways to get about the city.

Like most city destinations, one of the best ways to truly experience Amsterdam is on foot. Almost everything is within comfortable walking distance, and we stumbled upon some of our favourite parts of the city by just getting lost while having a wander, so taking it slow is definitely worth it. For example, by walking away from Amsterdam's high street, we found The 9 Streets (De 9 Straatjes) district, which houses some of the best independent, boutique shopping opportunities in the city.

If you're feeling brave, the most authentically Dutch way to get around Amsterdam is to hire a bike. It'll cost you about €15 a day, and it's worth remembering that helmets aren't often worn by locals – so make sure to request one before renting the bike. Also bear in mind that the Dutch ride hard and fast, so our best advice is to treat riding a bike in Amsterdam like driving a car; stick to the designated cycle lanes, signal at junctions and remember that the Dutch drive on the right.

If you're in a hurry, there's plenty of options for getting around the city quickly. You can get about via the metro or tram, but we'd recommend the latter as it stops more frequently, and you get to see the sights as you go.

There are two main tram stops at Amsterdam Centraal station, in the east and in the west. Most locals use the OV-Chipkaart (look out for the logo), which works just like an Oyster card in London. Load it up with credit, and don't forget to tap in and tap out every time.

However, for tourists, we recommend getting an iAmsterdam card. It gives you unlimited use of all public transport for as long as you need, as well as entry into many of the city's hundreds of museums and attractions. You can order the card online before you travel or pick one up once you arrive.

The Netherlands ranks 8th on the Good Trip Index

The Netherlands has weather similar to that of the United Kingdom. Generally speaking you can expect mild summers with occasional cooler periods and fairly cold winters with rain, wind and some snow.

Amsterdam weather in December, January, February (Winter). These are the coldest months in Amsterdam with temperatures on average sitting around 0 °C and reaching highs of 6-7°C. Rainy and windy conditions aren't uncommon and snow is quite frequent. During the prolonged cold periods, the city's canals can freeze over. Be sure to pack lots of warm layers.

Amsterdam weather in March, April, May (Spring). Early spring months remain cold, with snow still possible in March and sometimes even in April. Come May, temperatures are gradually getting warmer with highs of 17°C. April and May are the driest months in Amsterdam too, making this off-peak season a brilliant time of year to visit the city.

Amsterdam weather in June, July, August (Summer). Amsterdam enjoys warm weather and plenty of sunshine throughout summer, however, similar to the UK, cooler periods with rainfall are quite frequent. July is the warmest month of the year with average temperatures ranging from 20-25°C, making it a popular time to travel.

Amsterdam weather in September, October, November (Autumn). For most of September the weather remains quite pleasant with temperatures ranging from 11-19°C. October and November bring colder and wetter weather with temperatures dropping to around 9-4°C.

What to eat in Amsterdam

Amsterdam Oost, or East, is a bit of a hidden gem, as you'll find it's less touristy than some other parts of the city. The district houses the Dappermarkt, where you can find some of the best street food in the city, much of which has an Asian or African twist, due to many immigrants choosing to settle in this part of the city. For some exotic eating, there's nowhere better in the city.

While you're sampling the culinary delights of Amsterdam Oost, why not wet your whistle at the local brewery (Brewerij het IJ), which runs regular tours.

Located near the southern end of the city, De Pijp has the widest variety of restaurants and bars in Amsterdam. One of our favourite places to visit is the Albert Cuypmarkt for some stroopwafels, a traditional Dutch dessert of waffles and caramel syrup. You'll also find the Marie Heinekenplein is here, home to lots of bars and the Heineken brewery.

Best Places to visit in Amsterdam

Let's take a look at all the awesome things to do in Amsterdam. There's too many to list them all here, but here are some of our favourite things to see and do in this incredible city.

If you're looking to add a dash of culture to your Amsterdam holiday, then we recommend heading to the world renowned Rijksmuseum. You'll find a huge assortment of displays and exhibitions, but the museum is most famous for its collection of Rembrandt paintings, including his most iconic masterpiece, The Night Watch.

The Rijksmuseum is one of the most popular attractions in Amsterdam and queues can get really long. To beat the lines, you can book an e-ticket before you arrive.

Anne Frank Huis is on Prinsengracht, in central Amsterdam, and is where the teenager wrote her famous diary while hiding from the Nazis during World War Two. Many of the exhibits here are particularly emotional and poignant, but it's an important site of remembrance and well worth a visit.

It's also worth noting that from 9.30am to 3.30pm, entry is only available to those who have booked an online time slot. After this it's a queueing system, with people often queuing for hours before doors open. Our tip would be to book online as early as possible.

If you time your Dutch holiday just right, the Amsterdam tulips in Keukenhof are not to be missed.

Only open for 8 weeks a year, the tulip fields bloom between late March and early May and they're worth a visit just for the photo opportunities. It's also a great place to take smaller children if you're planning a family trip to the Netherlands, with plenty of parks and playgrounds to tire out even the most active kids.

Finally, what visit to Amsterdam would be complete without a visit to the red right district – known locally as De Wallen. It's home to coffee shops, peep shows, sex shops and just about anything in between.

Millions of tourists flock here every year and, even if you're not into what the De Wallen has to offer, we still recommend doing what we did and booking yourself onto a walking tour. We booked with AmsterdamRedLightDistrictTour.com, who were friendly and informative, talking us through some of the district's highlights.

How many days in Amsterdam is enough?


We'd recommend 3-4 days in Amsterdam to experience the main sights at a relaxed pace.

What is the best month to go to Amsterdam?


The best months to visit Amsterdam are between April and May. You'll be able to enjoy relatively mild weather, lower chances of showers, along with cheaper rates and fewer tourists to contend with. Spring is also tulip season! Tulips begin to bloom from the end of March until mid May, but the best time to see them in all their colourful glory is in April. The best time to visit if you're looking to save money is winter, particularly November and February.

Is Amsterdam a safe place to visit?


Yes Amsterdam is a safe place to visit. While it may be famous for its Red Light District and coffee shops, it's one of the safest cities in Europe. Tourists are unlikely to experience any crime or violence, however, like when you visit any other city, it's important to be aware of petty crimes like pickpocketing and bag snatching.

What is there to do in Amsterdam at Christmas?


December is full of Christmas celebrations in Amsterdam, from Christmas markets to skiing outside the Rijksmuseum, Winter Wonderland at RAI Amsterdam center to the Festival of Light along the streets and canals.

Is the Red Light District in Amsterdam safe?


While the Red Light District might have a bit of reputation for being a dodgy area, it's actually quite a safe and well controlled part of the city, especially in the daytime.