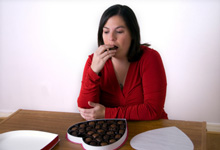 One per cent of people in the UK got dumped this Valentine’s Day according to a survey released today by HolidayExtras.com, the leading travel add-ons company.

The survey also revealed that 40% of hard-hearted Brits have fallen out of love with Valentine’s Day and ignore it, women far more so than men. Almost half of ladies ignore the occasion, compared to just 20% of men and 6% of Brits state that they ‘loathe’ Valentine’s Day.

However, for those that do make the effort, it seems that the girls are doing best at romancing their other halves – six in ten men were bowled over by their partner’s thoughtfulness this Valentine’s Day, compared to just four in ten women. The research also found that just 1% of men were disappointed by the effort their partner made, however 7% of women felt let down.

Mike Whiting, managing editor at Holiday Extras said, "The notion of Valentine’s Day is, it seems, becoming less important to people in the UK, however with great deals available all year, romantic breaks are still the ideal way to spoil your partner.

"Of course, if you were unlucky enough to break up on Valentine’s Day, taking a holiday is also the ideal way to get over it!"

For inspiration on romantic and exciting places to visit this year, as recommended by travel experts, see www.holidayextras.com/destinations.

Note to editors
Results are based on the responses of Holiday Extras customers taken between February 16 – February 23, 2009.