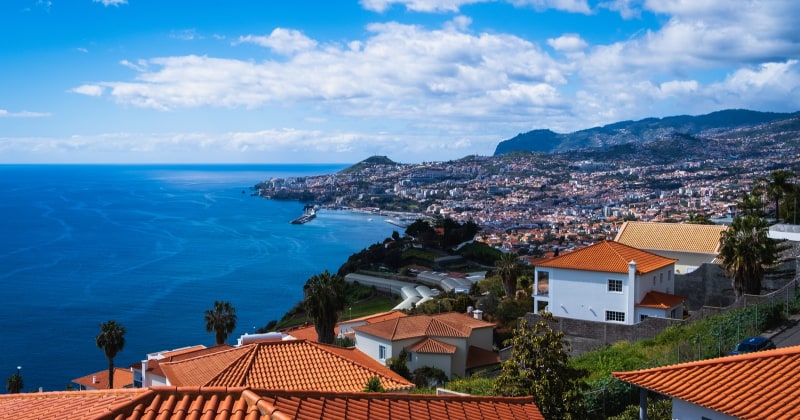 A remote island in the Atlantic, Madeira offers up a fascinating combination of history, diverse scenery including ancient rainforests and towering cliffs, lively resorts, and traditional villages.

Top things to do in Madeira

Where to stay in Madeira

Where to eat in Madeira

What time is it in Madeira?

What currency do they use in Madeira?

What language do they speak in Madeira?

What power adapter do you need for Madeira?

How long is the flight to Madeira?

Discovered by Portuguese explorers in the early 1400s the island of Madeira is actually part of an archipelago which also includes Porto Santo, the Desertas Islands and the Savage Islands.

Madeira is the largest of these islands by far and boasts some incredible and unique natural scenery thanks to its volcanic origins. The capital city is Funchal, which lies within a vast natural amphitheatre that slopes down towards the sea.

Madeira has a warm climate pretty much all year round, with average highs in the low to mid 20Cs throughout the year. You're more likely to get rain if you visit in winter though.

As a Portuguese territory, Madeira uses the euro. Tipping isn't essential, but 10% is always appreciated for good service.

What language do they speak in Madeira?

The official language of Madeira is Portuguese, although English is widely spoken too. If you want to try a bit of Portuguese while you're there, here are a few phrases to get you started:

Can you fly direct to Madeira?

Given its position in the middle of the Atlantic, the best way to reach Madeira is to fly. The island has one airport, the Cristiano Ronaldo International Airport, and it takes around 4 hours to fly there from the UK.

Madeira is also an important stopover for cruise ships heading across the Atlantic to the Caribbean, as well as being a popular port of call itself.

The island's location in the Dodecanese also makes it perfect for island hopping, as it can be reached by ferry from many other islands as well as Athens. It does take about 10 hours to reach Madeira from Athens by ferry, but it's a scenic journey that passes many islands along the way.

What are the best ways to travel around Madeira?

Because of its simply stunning scenery, driving in Madeira is a wonderful activity in itself, not just a handy way to get somewhere. Expect winding cliff-side roads, mountain passes and country lanes, along with a modern dual carriageway and lots of tunnels through the mountains.

They drive on the right in Madeira and most drivers are patient with tourists. If you're planning on driving we recommend filling up your tank before you leave your resort as you might not get a chance while exploring.

There are a number of different bus services on the island, so you won't have much trouble getting to where you want to go, whether you're exploring the attractions or making your way around Funchal.

In Funchal you can use the urban buses – these electric minibuses are also adapted for wheelchair users and are perfect for zipping around the capital. Just be aware that if you're on route one or two you'll need to hail them as there are no designated stops.

You'll need to take an interurban bus if you want to leave Funchal – they run regularly to neighbouring resorts like Santa Cruz and Santana, as well as the airport and attractions like Nun's Valley.

Ok so you might not get very far like this, but using a toboggan is one of the most iconic ways to get around – assuming you're taking a very specific route from the village of Monte into Funchal.

These wicker toboggans, or 'Monte sledges', can seat up to three people and are pushed by two drivers, known as carreiros, dressed in white uniforms and straw hats.

It's an exhilarating and uniquely fun way to explore the sloping streets between Monte and Funchal, and a must-do for all visitors! 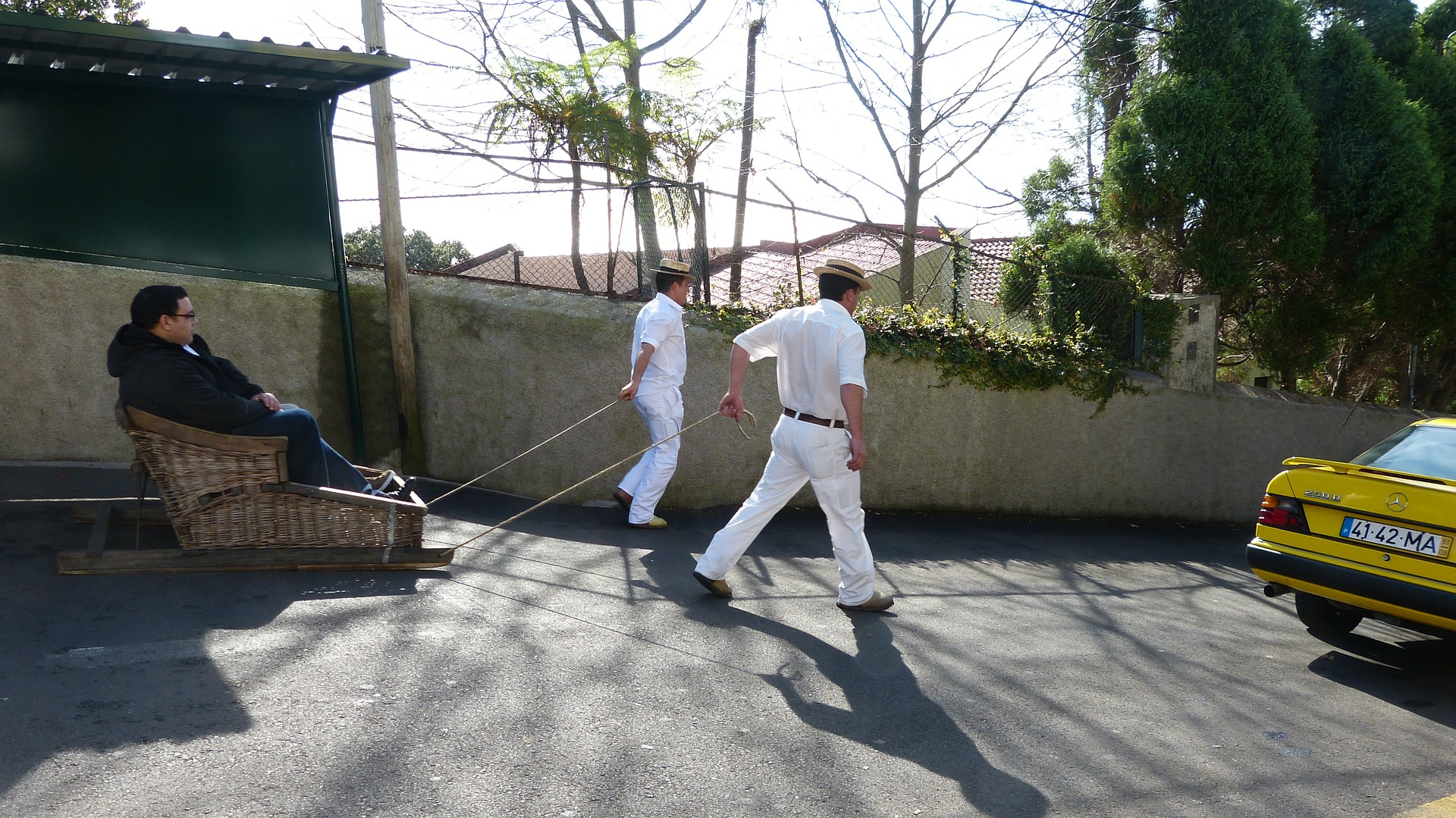 Pre-book your Madeira airport transfers, with prices starting from under £7.00 and FREE cancellations on a top range of shuttles, private transfers and taxis from Funchal Airport up to 3 days before travel*

Pre-book your Madeira Airport car hire, with prices starting from just £8.70 per day per day with FREE cancellations*

Top places to visit in Madeira

Madeira's eye-catching capital city cascades scenically down the gentle slopes of a natural amphitheatre towards the sea. Take in the traditional Portuguese colonial-style architecture and visit the dozens of parks and flower gardens.

Head into the old town for the best shopping and restaurants in the city, then follow the cobbled streets to the impressive 16th century cathedral. One of the most popular attractions is the cable car to Monte. It takes around 20 minutes and as you ascend you can take in gorgeous panoramic views of the city.

Once you're in Monte you can either take a toboggan back down into the city, or visit the Madeira Botanical Gardens, with their colourful terraced flower beds.

Nun's Valley is a tiny village in the heart of the island, surrounded on all sides by towering green mountains. Legend has it that the valley got its name after a convent of nuns took refuge here to hide from a pirate raid. The residents took advantage of the fertile lands here to grow crops and create pastures for livestock – allowing them to live almost completely self-sufficiently. These days the village is much easier to access thanks to a tunnel through the mountains.

A visit to the village is worth it for the scenery alone – looking up at the mountains as clouds creep down into the valley is stunning – but it's also a great place to buy local handicrafts and try some delicious dishes made with chestnuts grown in the valley.

Madeira���s ancient Laurisilva Forest is a surviving remnant of a time when similar forests covered most of Europe, and it's thought to be the largest of its kind. It once covered more than half of the island, but it shrunk significantly after humans began settling here.

The UNESCO-protected forest thrives in the mountainous reaches of the north, within the Madeira Natural Park. It's home to many unique plant and flower species only found on Madeira, like the extremely rare mountain orchid, as well many colourful birds and animals.

Other fun things to do whilst in Madeira

The levadas of Madeira are narrow aqueducts built to transport water from the northern parts of the island to the south, where the land was drier but better for growing crops.

This incredible network, started in the 16th century, is still used today to transport water around the island as well as providing hydroelectric power. There are more than 1,000 miles of these levadas criss-crossing the island and, aside from the water and power, they also provide an excellent variety of hiking routes that follow their paths.

It's a great way to see the island as the levadas snake through forests and mountain tunnels, along cliff tops and beyond. Some of the more advanced routes will require equipment like torches and helmets, but guided tours are available if you don't want to go it alone.

The waters around Madeira are teeming with life, and with a depth of around 3,000m just 5km from the shore, they're home to several species of dolphin and whale.

Whale watching safaris depart daily from Funchal and sightings are very common. If you're lucky enough you might spot sperm and humpback whales as well as bottlenose dolphins and striped dolphins.

As an added bonus, some whale watching trips are all inclusive, with sparkling wine, cocktails and local food all included in the price!

Where to stay in Madeira

One of the most popular places to stay is Funchal as it's easy to reach, has good transport connections and is a convenient base for excursions both inland and out to sea. It's pretty stunning too.

A lot of the island's best hotels are in or close to Funchal, plus it has an unexpectedly lively nightlife, with plenty of bars and clubs that quickly fill up in the evening.

For a relaxing stay close to the beach, pick Santa Cruz – there aren't many beaches on the island and Santa Cruz has some of the best, including the black sand Prainha Beach.

The resort has plenty of modern hotels but also retains its traditional charm, with its lengthy beachside promenade and charming churches. Santa Cruz also has a popular water park, where the kids can play on the slides while you relax on the lazy river…

Jardim do Mar isn't a traditional resort, but thanks to its location on a sliver of land that stretches into the sea and strong Atlantic winds, it's a haven for surfers.

There are a number of small hotels and holiday apartments that fill up in the winter when the conditions are at their best for surfing. But that's not all the town has to offer. The waters are popular with swimmers and sailors too, plus the region is ideal for hiking, and the scenic ruins of an old mill are a particular highlight.

What to eat in Madeira

There are plenty of Madeiran dishes to tempt your tastes. One popular dish on the island is espetada which consists of chunky beef skewers seasoned with garlic and bay leaves and grilled over wood chips. Or picado, which is small chunks of beef fried with garlic and red pepper and served with fries.

Fish plays a big part in Madeiran cuisine too – try tuna marinated in garlic, olive oil and oregano served with milho frito, or fried cornmeal. There's also bacalhau à Brás, which is the Madeiran take on fish and chips.

You've got to try the local tipple too. Madeira, a fortified wine similar to port, has a unique flavour thanks to its distillation process. Other popular drinks include the nikita, a mix of beer, juice, ice cream and pineapple pieces, and poncha – a kind of cocktail made with aguardente, honey and lemon juice. It's served pretty much everywhere.