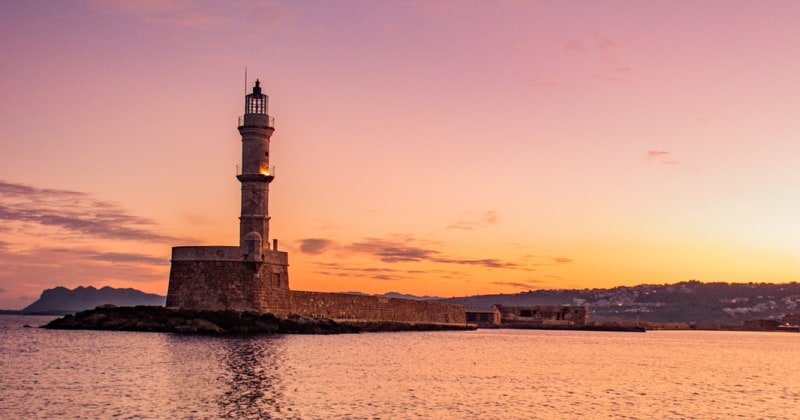 Welcome to the Holiday Extras Crete travel guide – the best place to find out everything you need to know about this fascinating Greek island before you go.
What you'll find in this guide:

Top things to do in Crete

Best places to stay in Crete

Where to eat in Crete

Top things to do in Crete

What time zone is Crete in?

What currency do they use in Crete?

What language do they speak in Crete?

What power adapter do you need for Crete?

Crete is the largest and most populous of the Greek islands. It was the birthplace of Zeus, home of the mythological Minotaur of the labyrinth, and has a history stretching back to the ancient Greeks and even earlier.

The warm climate, diverse scenery and thousands of years of history means there's something for every traveller – whether they want to visit the nightclubs of Malia or the ancient Palace of Knossos. That's not to mention the gorgeous beaches, impressive architecture and tempting cuisine.

Because of its mountainous terrain, the climate in Crete can vary from hot and humid in the summer, to mild in winter with a dusting of snow on the mountains. It can get quite wet in winter but the weather quickly improves as spring arrives and is at its best from June to September. During this time you can expect average temperatures in the mid 20Cs and very little, if any, rain.

As part of Greece, the official currency of Crete is the euro. A tip of 10-15% is common for good service. Although some restaurants popular with tourists add a service charge so be sure to check the bill first.


What language to they speak in Crete?

English is widely spoken across the island, especially in areas popular with tourists. But it's always handy to learn some of the language before you go. Here are some Greek phrases to get you started:

Crete has two international airports – Heraklion in the central north of the island, and Chania in the west.

You can get direct flights to both and it'll take around 4 hours to get there from London. If you're staying in Malia you're better off flying to Heraklion, while the beach resorts of the north west are better served by Chania.

What are the best ways to travel around Crete?

As it's the largest of the Greek islands, knowing how to get around is key to making the most of your stay here.

Crete is pretty big, so hiring a car while you're there is a great option if you want to see as much of the island as possible.

There's a main highway that runs from east to west along the north side of the island and this will probably be the starting point of most of your journeys.

While it may be a bit of a challenge to navigate the minor roads that weave through the island's interior if you're not used to it, you'll be rewarded with spectacular scenery. If you do venture to rural or mountainous areas stay on the lookout for roaming wildstock, fallen rocks and very sharp bends.

Crete doesn't have any railway and the only other form of public transport on the island is bus. Thankfully it has a pretty comprehensive bus network that connects the larger cities to the smaller towns and resorts, as well as the more rural areas further inland.

The buses run fairly regularly and they're reasonably priced too. You can buy your tickets in advance from a ticket office, but if you can't find one or it's closed you can buy them on the bus too. The main thing to remember is that if you're visiting during the high season, it's a good idea to buy your tickets the day before and get to the stop early – especially if it's going to be a long journey.

Buses are a decent alternative to driving - they're usually pretty comfy and air conditioned, and they serve the majority of attractions on the island, including the ruins of Knossos, Samaria Gorge and the island of Spinalonga. More on those next.

Where to eat in Crete

The best food on Crete takes advantage of the island's produce, which includes olives, oregano and locally caught seafood.

Simple can be best, like oregano roasted chicken with lemon, or go more adventurous with octopus boiled in vinegar or cuttlefish with wine.

For real crowd-pleasers you should try the fried cheese pies, or kalitsounia, which come in sweet and savoury varieties and are divine with a drizzle of honey.

You should also give the local tipple a go. Raki, a type of brandy made from grape pomace, is abundant in tavernas and coffee houses and pairs nicely with olives, mezes and dakos – the Cretan take on a Greek salad.

Best places to stay in Crete

Where you stay tends to decide what kind of holiday you'll have, whether you came to party, unwind or explore. Luckily Crete has plenty of options and even more resorts.

Malia is the party capital of the island as well as its most popular resort – especially with tourists from the UK. With its lengthy strip framed by bars, restaurants, tavernas and nightclubs, Malia is the place to go if you want the best nightlife. The beach and old town are pretty nice too.

Thanks to its popularity there's no shortage of hotels and apartments, whether you want to be by the sea or in the heart of the resort.

Chania is in the west of the island and couldn't be further, literally and otherwise, from the party town of Malia. Known for its stunning beaches and rugged coastline, the city itself serves as an ideal base to explore the island, with easy connections to Heraklion and beyond.

Plus the surrounding region is dotted with laid-back beach resorts, offering everything from all-inclusive luxury to self-catered apartments and everything in between.

Rethymno lies on the northern coast of the island, a little west of Heraklion. It's a popular destination for tourists but without the nightlife of Malia – ideal if you're after a more quiet stay by the beach.

The town itself boasts a pretty harbour and lighthouse, along with its gorgeous Venetian old town – one of the best preserved on the island. You can find a mix of hotels here, including some within the old town for a more authentic stay. Of course, there are plenty of resorts closer to the beach as well.