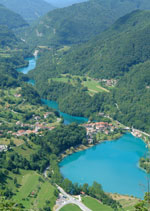 The recent European Tourism Forum, held in Bordeaux, France, saw the Slovenian resort of the Soca Valley receive the prestigious title of 'European Destination of Excellence'.

The Soca Valley played a prominent role during the First World War, with a series of bloody battles taking place in the region. As such, travellers visit the region to delve into the military history of the area, with the Kobarid Museum providing a compelling insight into the battles on the Soca Front.

Aside from the history of the region, many will discover a destination that exudes a rich natural splendour, with its setting among the magnificent Julian Alps enhanced by picturesque landscapes and fairytale panoramas.

The 'European Destination of Excellence' award is assigned to 20 of the best tourist destinations within the EU. The award for the Soca Valley is the first for a Slovenian destination, and it joins past recipients such as Troodos in Cyprus and Specchia in Italy.