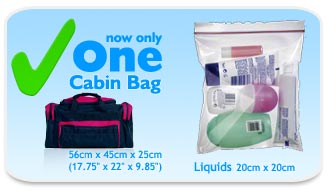 There could be chaos from 7 January when the Department for Transport has said that more than one item of hand luggage will be allowed onboard aircraft.

The confusion has arisen because it is up to individual airports to convince the DfT that they have the improved security scanners in place to allow them to search the extra volume of carry-on baggage.

Neil Pakey, head of the Airport Operators' Association and managing director of Liverpool John Lennon airport, has told the BBC: "Some of the operators say there's going to be a great deal of confusion because it looks as if there may be different rules at different airports". He added: "For us, an airport like Liverpool just would not have anything in place by 7 January."

Mr Pakey told the BBC that it is larger airlines like British Airways that are pushing for an increase in cabin baggage so that they can satisfy passengers using London airports. He also advised travellers to find out not just from airports but also from individual airlines whether they would allow more than one item of hand luggage.

A DfT spokeswoman told the BBC: "It is for airports and airlines to ensure that their customers are kept informed about the number of cabin bags they may carry and the continuing restrictions on liquids".

BAA, which operates seven UK airports including Gatwick, Heathrow, Stansted and Glasgow, confirmed to the BBC that it does not currently know whether any of its airports meet the DfT's requirements regarding security scanners.

The DfT spokeswoman added: "Investment in new technology is not the only way an airport can increase capacity - they could also do so through additional levels of staff for example".

If you are unsure about how many pieces of hand baggage you are able to carry onboard from 7 January your best bet is to follow Mr Pakey's advice and contact the airline you are flying with as well as the airport you are departing from.