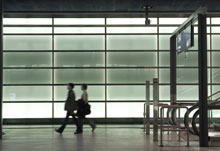 Airlines including Silverjet and US Airways are offering flights to Maxjet passengers stranded by the company going bankrupt.

Silverjet is offering seats on flights between London and New York for the same price passengers paid to Maxjet. Customers of Maxjet need to contact Silverjet by 31 December to take advantage of the price match offer and to quote their Maxjet booking reference.

"The airline industry is hugely competitive, which has been starkly illustrated by today's [24 December] announcement. Indeed, Silverjet has already seen a 20% increase in bookings since Maxjet's shares were suspended," said Silverjet ceo, Lawrence Hunt.

In contrast to Maxjet, Silverjet expects to announce profits for the year ending March 2008. In November Silverjet became the first business class only airline to launch a non-transatlantic service, offering daily flights to Dubai. And in September it launched a second daily flight from London Luton airport to New York Newark.

US Airways is offering standby tickets to Maxjet customers on flights between New York, Los Angeles, Las Vegas and Gatwick. Maxjet customers will be able to travel standby for a $100 non-refundable one-way fare plus taxes and fees. Passengers can catch flights from New York Newark, New York JFK and New York LaGuardia to Gatwick, as well as from Los Angeles International airport and Las Vegas McCarran International airport.

Eos Airlines is another business class only airline that has benefited from the demise of Maxjet. After Maxjet announced it had gone bankrupt, Eos gained another 500 bookings to fly stranded passengers back from New York to London. Eos reports that passenger numbers were up by 64% in October and November over the same period last year. "We are flight level profitable and all signs point toward continued success in 2008," said Eos president and ceo, Jack Williams.