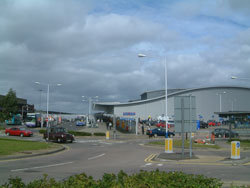 Low fares airline Monarch has been named as Official Airline Partner for two of the largest golf shows in Europe and says 78% of golfers that fly with it take two or more overseas golf holidays a year.

Golf is the most popular outdoor sport in the UK and Monarch is sponsoring the London Golf Show and the NEC Golf Show in Birmingham. About four million people play golf in the UK, and overseas golfing holidays have become increasingly popular thanks in part to the UK’s rainy weather.

“Research that we conducted in 2007 has proven golf as one of the leading hobbies for Monarch customers, which is reflective of the destinations to which we fly throughout Europe,” says MD of Monarch’s scheduled division, Liz Savage. The research took place in August 2007 and included 51,000 Monarch customers.

“Spain and Portugal came out as the top two countries in which to play golf overseas, with 78% of Monarch’s golfers surveyed confirming that they arrange two or more overseas golf holidays per year. With golfers being such a core audience for Monarch already, a partnership with the shows is a natural step to enable us to highlight the destinations to which we fly, as well as our year-round low fares and superior service,” adds Savage.

Monarch operates scheduled flights to a number of the most popular golfing destinations in Europe, including Spain, Gibraltar, Portugal and Cyprus, from Gatwick airport, Luton airport, Birmingham airport and Manchester airport. Recently the no frills airline was named as Leisure Airline of the Year.

As well as scheduled flights, Monarch also operates charter flights from the UK. The airline is the major supplier of charter seats to tour operators, and offers flights to around 100 destinations in Europe, America, Africa and Asia.

Monarch is keen to promote online check in to help customers avoid airport queues. Passengers can check in online between seven days and 4.5 hours before their flight.