Holiday Extras' COO gets on his bike and raises £6k 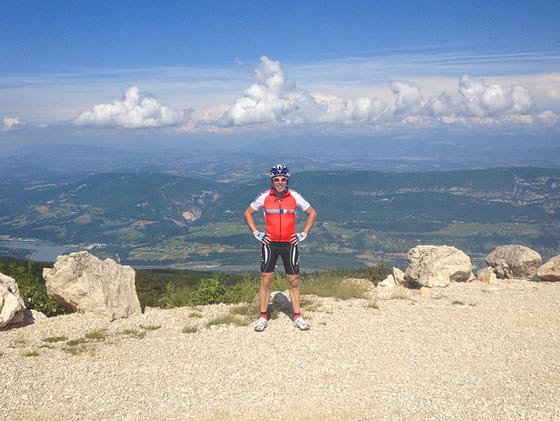 The Tour de Force takes place a week before the professional race and during the five-day challenge, Matt climbed a colossal 43,728 feet. His perseverance paid off, and he raised more than £6,000 for the William Wates Memorial Trust, Great Ormond Street Hospital and Demelza.

We interviewed the man himself to find out his high points (and not-so-high points), and to discover exactly what inspired him to take up such a gruelling yet aspirational challenge.


There are many other, and easier, ways to raise to raise cash for charities - so what inspired you to take up the Tour de Force?

I wanted a big challenge this year for several reasons. Firstly, I love cycling. Simple as that! Secondly, it was my 40th birthday this year and I wanted to mark the year with an epic event. Finally, I liked the idea of doing something for charity, but wanted to make sure it was a really tough event which meant I felt comfortable with chasing and harassing all my friends, family and colleagues for sponsorship. 5 stages of the Tour de France ticked every box!

Do you think six months of full-on training was enough to prepare you for a mission of this scale and magnitude?

Definitely. I was really pleased with how well the ride went. The long, sometimes very dull, cold, lonely training rides absolutely paid off, particularly in the mountains.

Were there any moments when you thought you may not be able to continue with the challenge - and what kept you going through those tough times?

I broke a couple of ribs in March which meant the next few weeks of training were painful - that wasn’t much fun. During the ride my only real low point was on the second day when we cycled for ten hours in constant torrential rain. We couldn’t even hear the briefing in the morning due to the thunder! We were so wet and cold that at the food stops, we were stuffing cardboard down our tops to try and stay warm! In terms of what kept me going, there was simply no question of stopping. I was totally focused on finishing the event.

How did you feel the moment you crossed the finishing line?

Tired, ecstatic, ready for a cold beer! It was a really strange mix of being pleased it was over, delighted with the achievement, and yet at the same time disappointed that I wasn’t setting off with everyone else on the next stage the following morning. Cycling for 10 hours a day became strangely addictive!

Do you have any challenges lined up for next year or are you going to be putting all of your energy into preparing for the full Tour de France?

I won’t do the full Tour next year - that’s one for a few years’ time. Getting a pass for three weeks, and finding the time to train will require some careful negotiation with my wife and daughter over the next few years! Next year I’ll go for some smaller challenges, probably some more mountain cycling. It’s the 100th anniversary of the Tour de France next year so it will be a great atmosphere. I quite fancy cycling up one of mountains early one morning and then staying up there to watch the how the pros do it. One of the iconic climbs like Alpe d’Huez or Mont Ventoux would be great.