I doubt many of us will be springing forward out of bed on the morning of Sunday 31 March 2013, when we've lost an hour's sleep.

Looking at it from an optimistic angle, the clocks changing signals the beginning of British Summer Time and longer, lighter evenings. 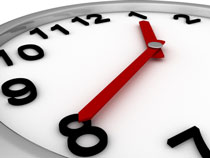 We've been changing our clocks backwards and forwards to varying degrees in England since 1916. William Willett was the man responsible for this. Mr Willett was a businessman and keen horse-rider - he first proposed the idea of British Summer Time in 1907 in a pamphlet entitled 'The Waste of Daylight'. Debate has been raging since then as to whether clocks should change at all. Why do we do it? And what happens in other parts of the world?

Willett had noticed that the summer mornings light was wasted while people slept, and that the time would be better utilised in the afternoon by putting the clocks forward. 'Daylight saving' was in fact common practice in the ancient world and had been resurrected by the American Benjamin Franklin in a 1784 satire.

After campaigning for years the British Government finally adopted the system just after Germany, and a year after Willett's death.

Over the years it has been suggested that Britain should keep to British Summer Time throughout the year. During the Second World War and in the late sixties trials took place and the clocks were not put back in autumn. The resulting discussion of the pros and cons lead to the Government decision to revert to the original system. A recent environmental report claimed that darker evenings in winter cause an extra surge in energy demand, carbon emissions and road accidents and that we should again adopt year-round BST.

The issue of time is particularly pertinent for international travellers. Not only do we need to check a country's time zone but also their use of daylight saving.

Since 2002 most of the European Union change their clocks on the last Sundays of March and October. North America and most of Canada use a similar system but on the second Sunday in March and the first Sunday in November. Egypt, Namibia and Tunisia are the only African countries who observe daylight saving.

The countries of South America use a variety of systems. Daylight saving is not generally used in Asia but the Middle Eastern countries observe it to varying degrees. New Zealand and parts of Australia are the only countries in Oceania that currently put their clocks forwards and backwards.