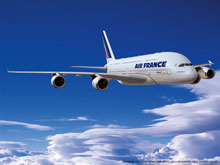 The new social networking site bluenity.com enables travellers to answer important questions such as ‘Who am I flying with on my next flight?’ and ‘Where can I get the best addresses for business and leisure anywhere in the world?’.

By signing up with bluenity.com air travellers will be able to make their flight schedules public and get an update from other travellers about their flight arrangements. This will enable them to meet online before they travel and arrange to meet up in an airport lounge or to share a taxi from the airport and stay in touch throughout their journey.

“The reservation system operated by Air France and KLM is now on a par with the technology and functionalities offered by the web community. This is a response to those customers who would like to be proactive on their trip, whether they are travelling for professional or leisure purposes,” explains Air France KLM senior vice president marketing, Patrick Roux.

“Travellers and especially the 75 million customers who choose our two airlines every year, will be able, by using Bluenity, to meet before, during and after their flight,” Roux adds.

As well as arranging to meet during their journey, airline passengers using bluenity.com will also be able to give advice and share their travel experiences with other travellers. They will be able to share their top travel tips for hotels, bars, restaurants, tourist attractions, nightlife and shopping and benefit from the recommendations of others.

“A growing number of people solely rely on the experience of others for all sorts of information. Bluenity.com offers all travellers an online and interactive platform to enrich their travel experience and that of others,” comments Air France KLM head of e-commerce, Martijn van der Zee.

Bluenity.com is now available in three languages – French, English and Dutch – and is free of charge.