Glasgow airport builds for the future

Construction work has begun on the new £30 million 'skyhub' at Glasgow airport, part of BAA's planned £200 million investment at the site over the next decade.

Airport MD Gordon Dewar said: “skyhub will allow us to offer greater levels of choice and comfort for passengers by creating one departure hub open to all departing travellers. At £30 million, it is the largest single investment made by BAA for a decade and will transform the travel experience for passengers flying from Glasgow Airport,” reports breakingtravelnews.com. 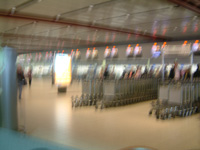 One of the key benefits of skyhub is that it is expected to reduce queueing at security. “The new central search area will allow us to reduce the amount of time passengers wait in security lines to just five minutes or less,” claims Dewar.

New shops, bars and restaurants will also be a feature of skyhub. At Christmas a new Frankie and Benny's restaurant will open at the terminal, replacing Garfunkel's. More big name retailers are expected to be announced soon.

Skyhub is scheduled to open in October next year. Passenger numbers at Glasgow have risen by 60% over the past five years to 8.8 million, and the airport forecasts that this could reach 15 million by 2015.