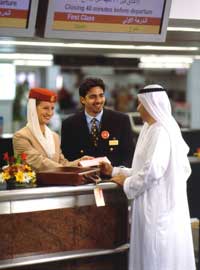 The Environment flight, as it has been dubbed, left Dubai at 8.55 this morning and is scheduled to land in San Francisco at 1pm local time. On the flight Emirates will trial a new environmental programme, designed to achieve the most environmentally sophisticated route and trip possible.

By using multiple fuel and emission saving measures Emirates estimates the Environment flight will save an estimated 2,000 gallons of fuel and 30,000 pounds of carbon emissions on the 16-hour non-stop service.

“After months of planning, Emirates’ Environment flight is a best-practice trial of how airlines, governments, manufacturers, technology providers and airports can work together to be as eco-efficient as possible,” comments Emirates Airline and Group chairman and chief executive, HH Sheikh Ahmed bin Saeed Al-Maktoum.

Emirates is using the new “ultra eco-efficient” Boeing 777-200LR on the Environment flight and on subsequent flights on the airline’s new route between Dubai and San Francisco.

“With the introduction of our new 777 family, our 58 ultra-efficient A380s and new A350-XWBs aircraft, Emirates will operate the world’s most efficient fleet of wide-bodied aircraft,” states Sheikh Ahmed bin Saeed Al-Maktoum.

The fuel and emission saving measures being used on the Environment flight include washing the 777-200LR to minimise drag, a priority departure route out of Dubai to allow the plane to reach optimum cruise altitude as quickly and efficiently as possible, and real time weather updates so the most efficient route can be taken.

Special negotiations with the Russian government took place to allow the Environment flight to use revised routes within Russian airspace. Sixteen additional route segments have been added in Russia to allow flights to pick the best route available on the day dependent on the winds.

The Environment flight will cross near the North Pole following a long-term programme of tests and negotiations involving various governments and manufacturers. Emirates operated three flights over the Polar region to evaluate the route and operating conditions and to facilitate use of the air space corridor, known as Polar Routes.