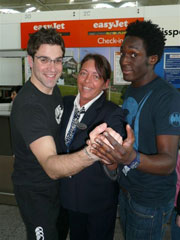 Last week Blue Peter presenters Andy Akinwolere and Gethin Jones were spotted doing a quick twirl with the easyJet Check in lady at Stansted Airport. Both were on their way to Belfast to embark on a challenge to climb the UK's four tallest mountains.

The challenge was set for Gethin, Andy Akinwolere and Zoe Salmon in aid of Sport Relief which aims to help the world's poorest people.

The Blue Peter challenge was to climb the four mountains in 48 hours. The duo were seen at Stansted airport, where they boarded an easyJet flight to Belfast in preparation to climb their first peak in County Down, Slieve Donard.

Gethin is best known for his recent appearance on BBC 1's Strictly Come Dancing. He was once voted as Britain's most Eligible Bachelor by Company magazine.

After completing the challenge Gethin, said:" ..having climbed the four highest peaks in the UK in the space of 48 hours. Now I ache so much I can barely climb to the top of my stairs. It was one of the toughest challenges I've ever faced but luckily I had my two best mates Andy and Zoe there every step of the way as well as top mountaineering advice from Mr Mountain himself, Ben Majors."

Slieve Donard in County Down Northern Ireland is one of the mountains that features in Ireland's Four Peaks Challenge this summer. Hikers will raise more than 400,000 euro when they climb Ireland's highest mountains between June 6th - 8th 2008. This is the ninth year of Four Peaks challenge. Last year a total of 75 teams raised 375,000 euro. This year the Four Peaks Challenge invites teams to raise a minimum of €4,500 in sponsorship to help people who are homeless.