Take a Walk Through the Ancient City of Petra

Get lost in the ancient city of Petra.

An ornate city carved out of towering red rock by an ancient civilisation: Petra is a classic bucket list destination and a truly awe-inspiring creation. Explore this 2,000 year-old-city and discover for yourself why it has been named a new wonder of the world and a UNESCO World Heritage Site. 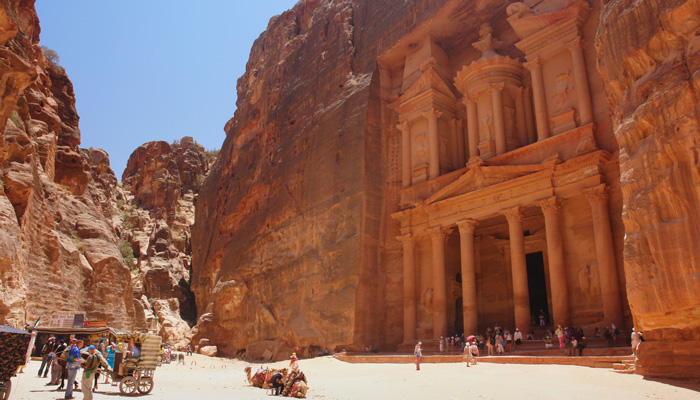 Petra was hidden for centuries until a canny European traveller rediscovered it during the early 19th century, amid the mountains and desert canyons of the Ma'an region of Jordan.

Crafted by the Nabataean people at an important junction on trade routes between the Red and Dead seas, Petra was a thriving capital from around 300 BC to AD 106. For the last 200 years, visitors have flocked to see the impressive Greco-Roman architecture that emerges from the red and pink-hued sandstone rock, as well as the city's sophisticated water system.

Petra's most famous sight is Al Khazneh (the Treasury), a 30m by 43m facade carved out of the rock face which has featured in Indiana Jones and the Last Crusade and The Mummy Returns among many other movies. And you will certainly feel like an adventurous archaeologist as you search out the hundreds of intricately-carved tombs, temples and sacrificial altars within these ancient city streets.


Your Trip to Petra, Jordan 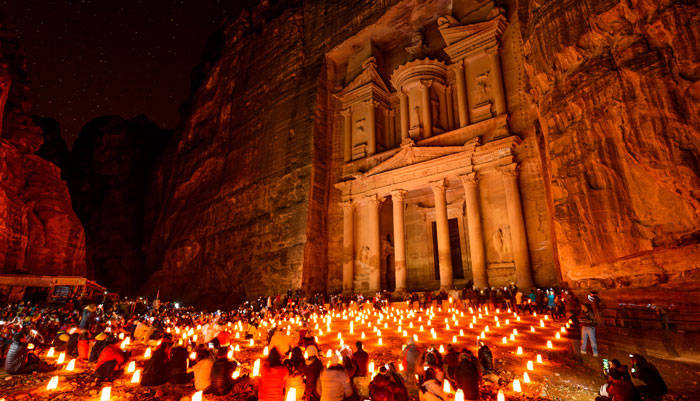 As you would expect, Jordan is roasting during our summertime. Spring or autumn temperatures are much more pleasant for a visit. Once in the country, early to mid-morning or late afternoon are the cooler, quieter times with the best light for photographing the natural hues of the rock architecture.

Travellers not visiting Petra as part of a tour group will need to buy tickets from the Visitor's Centre in Wadi Musa, two kilometres from the lost city. Prices vary depending on how long you're staying in Jordan and if you're local. Overnight passes are available.

Be sure to wear comfy footwear, a hat and sun protection, and bring plenty of bottled water for the desert heat. If you're planning on staying after dark, pack some extra layers for when the temperature drops. Women should cover up and dress appropriately. And be prepared to get quite dusty!

Entrance to the Petra Archaeological Park is via the Siq, a narrow kilometre-long gorge flanked by 80m high cliffs. Motor vehicles are not allowed to enter but visitors can hire a horse or horse-drawn carriage to take them through the Siq. If you have mobility issues, a special permit can be bought at the Visitor's Centre to allow a carriage to take you to the highlights of the city.

There are two museums and restaurants on site, and local Bedouins sell handcrafted souvenirs. If you're not interested in buying from the more persistent traders, decline politely. Always avoid the fake antique coins or unofficial tours on offer - and anyone trying to sell you part of the real Petra!


Make the Most of Your Lost City Experience 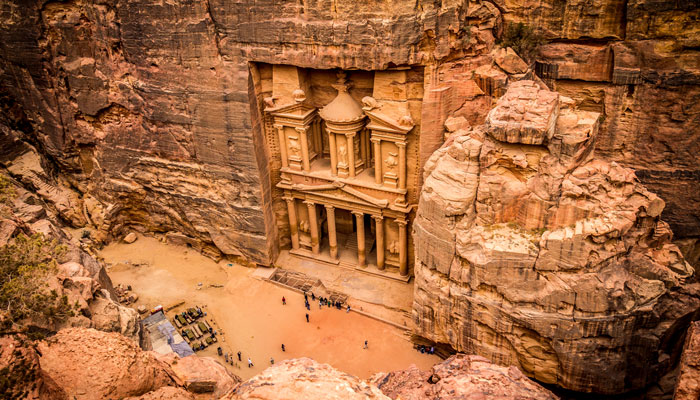 Wear your walking boots and climb the 800 steps to the Monastery to get a jaw-dropping view of the rocky, rose-tinted valley below. There's also a tip top view from the Roman-style amphitheatre ruins.

For those who don't fancy traipsing through the dust in fierce temperatures, donkeys or camels can be hired with a handler who will take you through the lost city on a designated route.

Combine a trip to Petra with dinner with the locals of Wadi Rum, a night in a Bedouin tent and a therapeutic swim in the Dead Sea on this G Adventures Highlights of Jordan small group holiday.


Add Jordan's greatest tourist attraction to your Bucket List and wonder at the staggering achievements of an ancient culture.