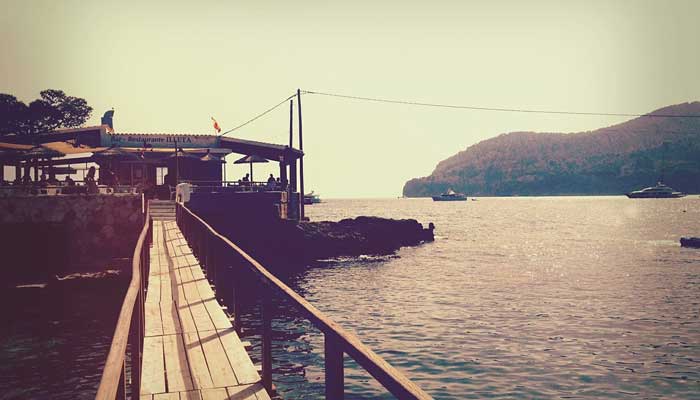 The earliest settlements on Majorca date back to around 4000 BC, and the excavated Bronze Age settlements at Capocorb Vell near Llucmajor in the south of the island, and Ses Païsses near Artà in the northeast are open to visitors. Little is known about the island’s earliest settlers; the stone structures known as talayots found at each archaeological site may have been used as storehouses or for religious purposes.

Around 800 BC, the island was colonised by seafaring Phoenicians from coastal North Africa, who established flourishing trade routes between the Mediterranean and the Red Sea. Majorcan soldiers armed with slings were known to have fought as mercenaries for the Carthaginian forces. After the fall of Carthage, the Balearics became part of the Roman Empire in 123 BC; the capital Palma was founded as the Roman city of Palmaria at this time, and Roman remains can be found here and in the northeastern city of Alcúdia (known in Roman times as Pollentia).

Majorca became part of the Byzantine Empire in the 6th century, and Majorca has been under Spanish rule since.

Majorca was annexed to the Crown of Aragon in 1229, and Palma became an important seaport for this European monarchy extending across the southern coasts of modern-day Spain and France. Attacks by North African pirates were common in the Middle Ages, so the coastal watchtowers and fortifications that can still be found on the island date from this time.

The monarchies of Spain united in the early 18th century, and church buildings (such as the basilica currently being excavated at Son Peretó) date back to this time.

Tourism has played a significant role in the development of Majorca’s economy since the 1950s, and today millions of visitors from countries including the UK, Germany and the US arrive on the island annually.

As an autonomous region of Spain, Majorca celebrates many Christian festivals including Christmas, Lent and Easter. The weekend before Lent (usually falling sometime in mid-February) is known as Darrers Dies or “the last days”, and is celebrated with a parade of colourful floats, sweets and games. Shrove Tuesday is celebrated with the symbolic “burial of the sardine” in Son Carrio on the east coast of the island.

Spring is celebrated throughout May with family fairs, agricultural shows and Spring markets all over the island. The medieval town of Capdepera in the north-east holds a Medieval Fair on the third weekend of May every year, with traditional costumes, food and music.

The Nic de Foc (Night of Fire) marks Midsummer’s Eve each year in June with bonfires and fireworks displays in the Parc de la Mer in front of the Cathedral in Palma. Summer Fiestas are celebrated throughout July and August for Saints John, Peter, Jaume and Catalina.

Majorca also has a strong arts heritage. The Catalan painter Joan Miró, spent a great deal of time in Majorca and lived on the island from 1954 until his death in 1983. The Fundació Pilar i Joan Miró in Palma now houses a collection of over 2,000 drawings, paintings, sculptures and prints in the grounds of Miró’s own home and studios. Artists Miquel Barceló, José María Sicilia and Astrid Colomar were also born in Majorca.

Composer Frédéric Chopin spent the winter of 1838 in Valldemossa, on the western coast, during which he completed a number of piano works. Chopin’s piano is one of the objects on display at the Royal Carthusian Monastery, where Chopin stayed with his lover, the French novelist George Sand.Other writers who have spent time in Majorca include the British crime novelist Agatha Christie, who set the short story collection Problem at Pollensa Bay and Other Stories in Port de Pollença on the northern coast; and the poet and novelist Robert Graves, who lived in Majorca for many years until his death in 1985 and is buried on the island.

With over 2,000 restaurants on the island, Majorca is a great place for foodies to visit. Popular Majorcan dishes include Sobrassada – a piquant cured pork sausage spiced with salami and served in casseroles or sliced on toasted bread; Arròs brut ("dirty rice") – rice cooked with saffron, meat and vegetables; Caldereta – a lobster stew; Botifarró – a coarse pork sausage eaten hot; and the sweet pastry ensaïmada. Unsurprisingly, given the importance of fishing to Majorca’s development, whole baked fish is another popular meal. Olives and almonds are key features of Majorcan cooking, alongside paprika and garlic.

Red wine is both a common accompaniment to a Majorcan meal and a popular cooking ingredient; wines are grown locally in Binissalem and Plà i Llevant.