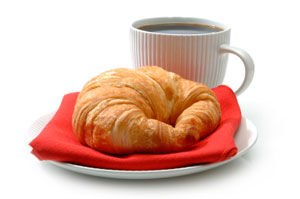 How did you start today - with cereal, porridge, toast or a hearty fry-up?

Hopefully you had some breakfast - because if not, you're contributing to the UK economy losing £22 billion a year, according to research by Express by Holiday Inn.

The hotel chain, which provides a free breakfast for its guests, says more than 900 million man hours are lost each year because people don't eat before they come to work, so are less productive.

More than six million people in Britain never eat breakfast during the week - and more than half of those who miss it end up snacking on biscuits, chocolate or crisps instead.

But 73 per cent of people say they feel more alert after breakfast, and 20 per cent say they are unable to do their job properly without it.

Statistician Dr Geoff Ellis conducted the research, which included a survey of the habits of 1,500 British workers.

He said: "The research demonstrates a huge loss of productivity resulting from workers failing to fill up on fuel in the morning.

"Indeed, given that half the people surveyed admitted to only having a partial breakfast - a piece of toast, a piece of fruit or a cereal bar - the actual effects of people skipping breakfast may be far greater."

Nutritionist Fiona Hunter said: "These findings confirm that a good healthy breakfast sets you up for the rest of the day, which is why many nutritionists consider it to be the most important daily meal.

"Other research shows that people who skip breakfast are more likely to be overweight, describe themselves as stressed and suffer from colds."

If you fancy doing your bit for the UK economy, why not book a room at the Glasgow Express by Holiday Inn with Holiday Extras?

Prices start from just £73 for a room only, or £121 for a room with eight days' parking. A free continental breakfast is served from 4am to 10am.