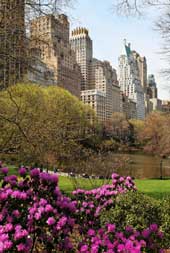 Whether you're mooching around an art gallery, sipping a cold beer at a streetside cafe, strolling through a park or hitting the department stores, there's nothing quite like a city break for picking you up after a long, cold winter.

And at this time of year you don't need to fight hordes of tourists to get to the good stuff.

The big old apple is perfect in the spring, after the snow has melted but before the heavy summer heat descends. There's no better time to explore New York's five boroughs and numerous neighborhoods, each with their own rich culture and vibrant community.

In New York, you'll want to get as much for your struggling pound as possible, so many of the activities we've selected are free or low-cost. Though you'll want to spend a bit of cash when strutting the streets that never sleep.

Manhattan Island is New York's commercial and cultural hub. You will be entertained 24 hours a day, in the theatres of Broadway, museums of the Upper East Side, department stores of Midtown, leafy streets of Greenwich Village, boutiques of NoLita, cutting-edge clubs of the East Village, swanky hotels of SoHo, bustling markets of Chinatown and lush expanses of Central Park.

During the spring, St Patrick's Day and Easter parades snake through the city streets, whilst ships from around the world will dock in New York Harbour for Fleet Week and Hell's Kitchen will host the Ninth Avenue International Food Festival, a celebration of diverse ethnic cuisines with food and live music.

Ideal for a springtime browse is the Brooklyn flea market at Fort Greene as well as the sprawling Prospect Park and the Botanic Gardens which holds an annual Cherry Blossom Festival in early May: all within easy reach on foot from Manhattan via the iconic Brooklyn Bridge.

Not known as a top tourist destination to many Brits, surprisingly the borough of Queens has a lot to offer the visitor. The most ethnically diverse patch of New York - and that's saying something - Queens is home to Little India, Greek Astoria, as well as lively communities of Chinese, Irish, Korean, Peruvian, Italian, Japanese and more.

This area has many attractions and historical sites, including Socrates Sculpture Park, the Noguchi Museum, the Museum of the Moving Image, the New York Hall of Science, Shea Stadium, the Jamaica Bay Wildlife Refuge, the Queens County Farm Museum and the King Manor Museum.

New York's northernmost territory, The Bronx, is another neglected part of the city for many travellers. But if you have the time, it's worth a trip for the famous Yankee Stadium, the Bronx Zoo, Edgar Allan Poe Cottage, Bronx Museum of the Arts, Little Italy and City Island, a quaint waterside community well suited to a spring wander.

You've got to go to Staten Island, if only for the free ferry ride through New York Harbour. Sailing past the Statue of Liberty and Ellis Island you'll get a fantastic view of Lower Manhattan. For those who dare to explore the island rather than hop back on the ferry straight away, there are some hidden treats.

Snug Harbor Cultural Center was once a refuge for retired merchant seamen and is now filled with art galleries, performance spaces and museums. The Staten Island Zoo, Sandy Ground Historical Society museum and 220-acre Blue Heron Park could all enrich your NY stay too.

Eight million residents can't be wrong, this non-stop city really is something special. So book that flight today and be a part of New York this springtime.