Best Beaches For Couples in Winter

Escape the cold and enjoy the sunshine. 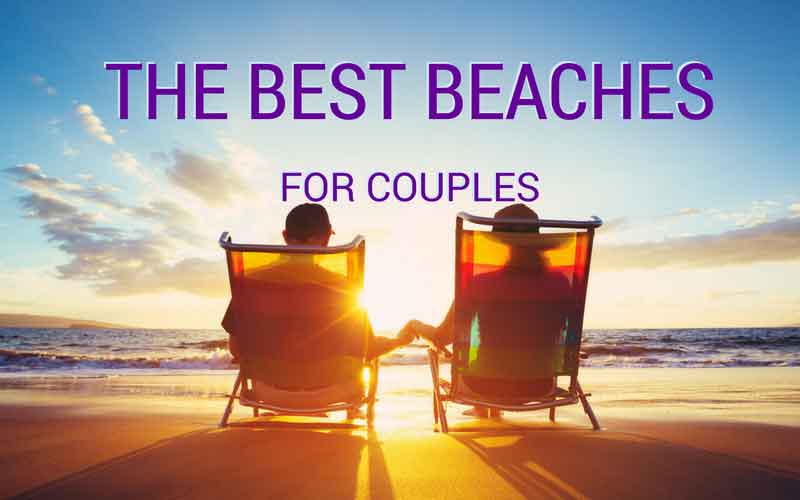 As we head towards the coldest and darkest time of the year, the prospect of a winter sun holiday grows more appealing by the day – particularly for those in the mood for fun and romance! We've rounded up some of the best beaches for sun-seeking couples looking to enjoy a warm winter break.

The Best Beaches for Couples in Winter 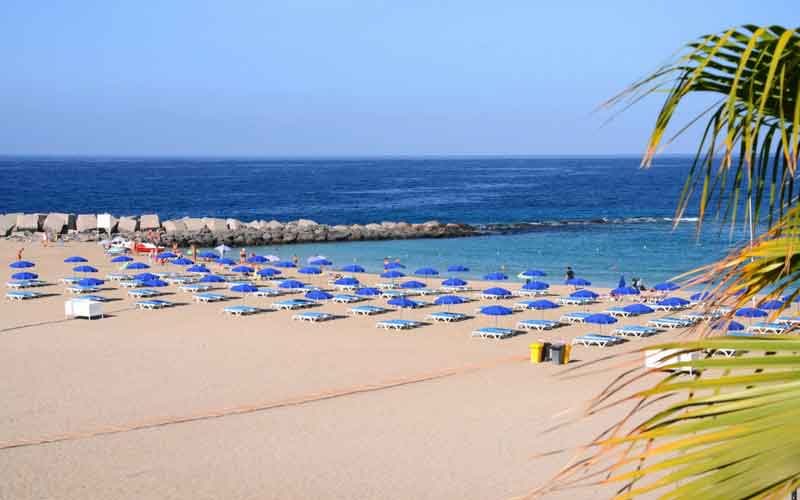 Based in the Los Cristianos area of Tenerife, this golden, sandy beach is a real hit with fun-seekers. Grab a cocktail in one of the Tiki-style bars or simply sunbathe on the expansive and clean, golden sands: Playa de las Vistas is the perfect spot to just chill.

In line with many popular winter sun destinations on the Canary Islands, Tenerife enjoys good weather all year around and stays comfortably mild from November to March. Temperatures don't go much beyond low twenties in winter, but the island is bathed in sun for up to nine hours a day in February and March. Tenerife is easy to reach from the UK, with flights taking roughly four-and-a-half to five hours. 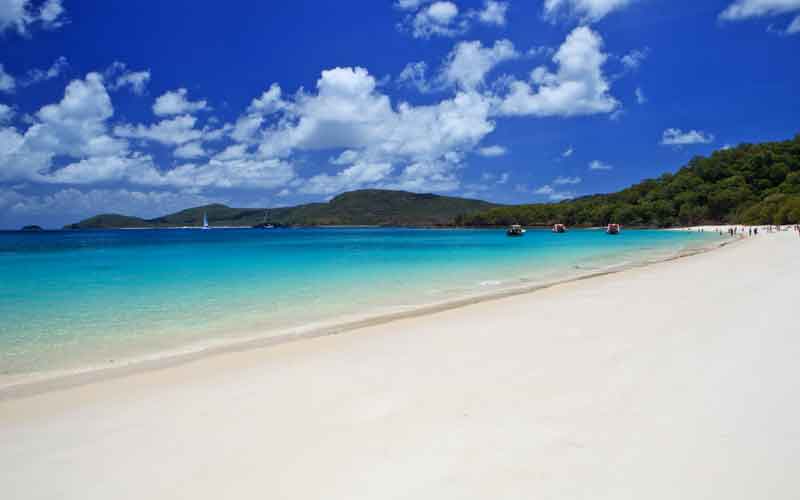 For those in the market for a long-haul winter sun break, Australia provides all the ingredients for a hot and sunny beach holiday. The better-known beaches like Bondi Beach and Byron Bay have become tourist and surfer hotspots, but for those looking for romance and natural beauty, it's hard to beat Whitehaven Beach near Queensland's Great Barrier Reef.

Located on the uninhabited Whitsunday Island, this stunning four-mile stretch of pure white silica sand ranks itself amongst the most beautiful beaches in the world. The views are simply breathtaking, and will set the perfect tone for romance! 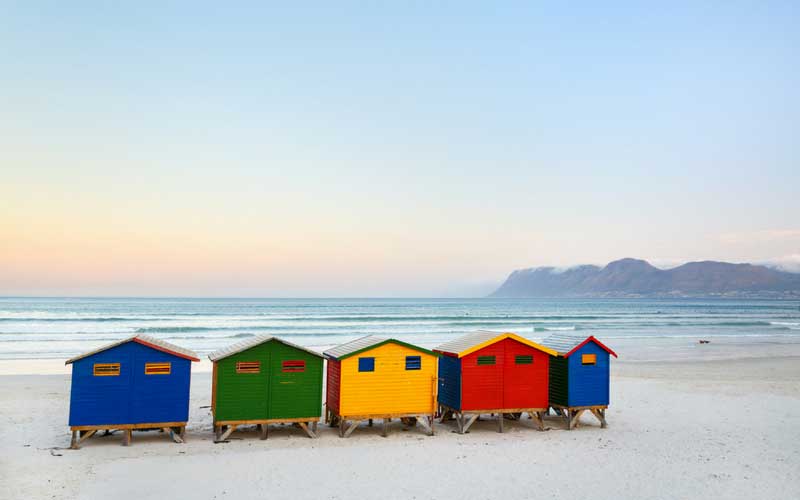 With its colourful wooden huts and white sands, Muizenberg is a picturesque and popular spot for tourists and locals alike on South Africa's Western Cape. Ideal for couples looking to do a little more than just soak up the sun, the beach is a hive of activity: visitor can enjoy a mix of whale-watching, surfing and swimming in the warm sea.

There are plenty of places to eat and drink along this stretch of coastline, and if you want to see more, the Southern Line Rail Route is a great way to take in the scenery. South Africa's summer runs from mid-October to mid-February, so it's well placed for a winter sun break: temperatures generally sit around the high twenties, broken by the occasional dramatic thunderstorm!

It's also worth remembering that South Africa's time zone is close to that of the UK, so you can enjoy its sunny winter climate without having to endure disruptive jetlag. 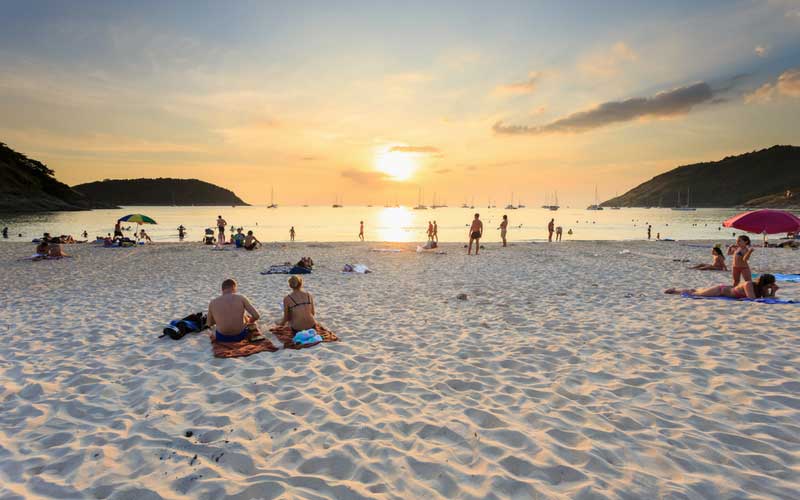 Famed for its particularly beautiful sunsets, Nai Harn beach is another outstanding coastal spot where romance is almost guaranteed to blossom! The beach is situated in Thailand's popular destination of Phuket, and is loved locally for its warm, gentle water and sheltered coves.

Phuket has a tropical monsoonal climate and is warm all year round, but our winter is said to be the best time to visit, as there is less sticky humidity in the air from December to March. You can expect temperatures up to 32C (89F) at this time of year. 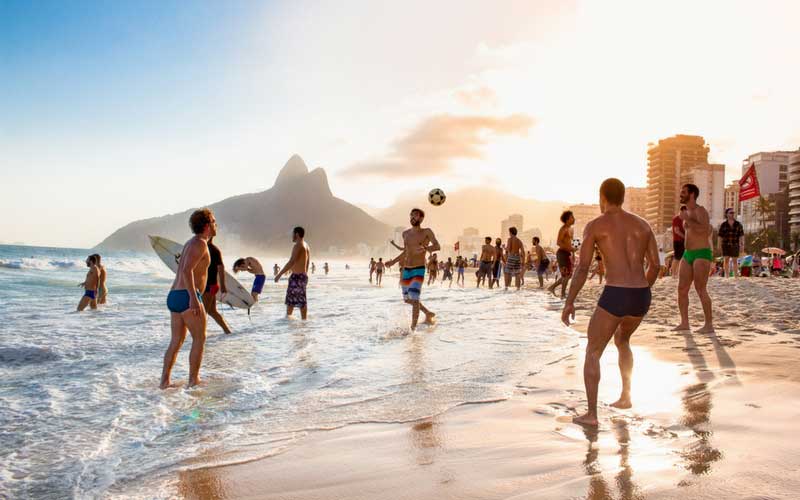 Brazilian culture is strongly intertwined with beach life, so if your idea of heaven is endless golden sands and endless beach parties, your dream destination is probably hiding somewhere along its vast coastline.

Picking out one single outstanding beach from all that Brazil has to offer is an almost impossible task – there are just so many idyllic spots to choose from. But if you want to take a trip to one of the country's most iconic and celebrated locations, you can't beat Ipanema Beach at Rio de Janeiro. Made popular by the song The Girl from Ipanema, the beach is known for its miles of white sand, beautifully tiled promenade and striking backdrop of mountains composed of the Dois Irmãos (Two Brothers).

Whether you want to just walk along the promenade and watch the world go by or take part in many of the activities on the beach itself, you're guaranteed a trip to remember – particularly if you visit during the vibrant carnival season, which gets under way in late February. Ipanema has also been described as the ‘World's Sexiest Beach', so be prepared to see plenty of flesh on display!

Rio's summer runs from December to March, so you'd better like it hot if you want to visit around this time of year: temperatures frequently exceed 29C (85F).