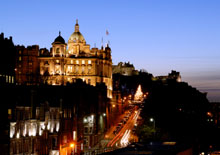 The hugely popular Edinburgh Festival Fringe kicks off on Sunday 3 August and will run until Monday 25 August with its mix of off-the-wall comedy, theatre and music.

The Edinburgh Festival Fringe is known for diversity, vibrancy and often, controversy. This year's highlights include the Club Noir burlesque show; a one man show featuring a chainsaw wielding comic; an Israeli drag act; and a stripping granny.

An annual celebration of artistic freedom, the Fringe began as the rebellious younger brother of the main Edinburgh International Festival in 1947. Since then this unique arts festival has grown and grown and now eclipses the original event. The Fringe generates about £75 million for the Scottish economy every year.

The 2008 festival will feature 31,320 performances of 2,088 shows in 247 venues. A third of the programme is comedy; almost a third is theatre; and 17 per cent is music. The remainder is made up of musicals and opera, dance and physical theatre, children's shows and exhibitions.

Tickets are available now for all Fringe shows from the official festival website, edfringe.com.Some problems have been encountered with the new box office system which is delaying the printing of show tickets.

Remember to book your Edinburgh hotel early this summer with Holiday Extras. The four star Edinburgh Marriott is a stylish four star hotel located within the city's business district, just two miles from Edinburgh airport and ideal for a stop-over before your flight.

*Please note: This price is correct for bookings searched on July 30, 2008. Prices are subject to change. Book the Edinburgh Marriott Hotel in advance to get the best price and availability.