Ideas for happy holidays for the whole family

Our customers tell us what they think about travel

Find out what's happening in the world

2016 was certainly a year full of news, views and events in the travel sector. We surveyed over 35,000 customers this year - here is a summary of UK holidaymakers' opinions in one simple snapshot. Download the full infographic here.

Brexit has dominated the UK news in 2016 and Holiday Extras, the market leading travel extras company, was able to share some insight into the mood of Brits who had just returned from a holiday abroad in its pre-Brexit customer polls.

Before the surprise Brexit results,  over half of Brits (53 per cent) had absolutely no concerns about any hikes in the price of flights if the vote should go in favour of Brexit - with  68 per cent declaring that an increase in flight costs wouldn’t sway them to take a staycation instead of a trip abroad.

The mood of unconcern extended to the European Health Insurance Card when nearly three-quarters (72 per cent) weren’t in the least bit concerned about not receiving the protection offered by the card in future.

However, as the time to vote became closer, so the polls revealed that Brits scrutinised the effects that may actually concern them personally - and more to the point...affect their finances - British holidaymakers became concerned about the plummeting value of the Pound against the Euro, with nearly a quarter (22%) admitting it impacted their choice of holiday destination in 2016.

The research also indicated that uncertainty surrounding Britain’s future relationship with the EU shifted our behaviour in holiday resorts, particularly amongst women. Forty per cent of women polled said they would take cost-cutting measures on holiday compared to 28% of men. This included limiting the holiday spend (14%) and sticking to a pre-planned budget by purchasing Euros ahead of their holiday (26%).

Travellers also indicated that they would cut back on food and drink during their next holiday, with a third (32%) declaring they will be avoiding the minibar and expensive hotel meals - 19% would be considering self-catering options, and 7% said that they would cut down on shopping for gifts and souvenirs. 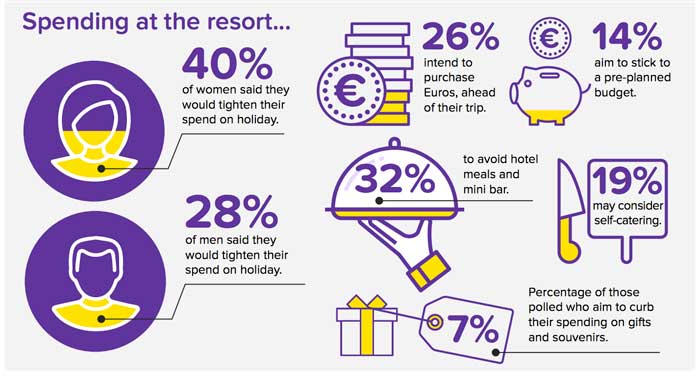 Passports and check in:

Controversy following the reports in September that the Home Office is considering introducing a chargeable fast-track service costing between £5 and £17.50 per person at UK airports; was not backed up by the ensuing Holiday Extras poll of British holiday travellers -  who were actually in favour of the proposed charges. More than half (52 per cent) of Brits voted in favour of this initiative to allow travellers who could afford it to skip the lengthy queues.

On the subject of passports, Brits’ opinion was divided: The largest number of people, 53% -  feel that the passport is a clear and hugely symbolic document that represents our sovereignty and independence; while 27% see the passport as just a travel another document and not an important symbol of national pride. Given this, it’s surprising that nearly half of those polled (46%) thought that the passport should stay exactly as it is rather than revert to the old style hard-backed passport. 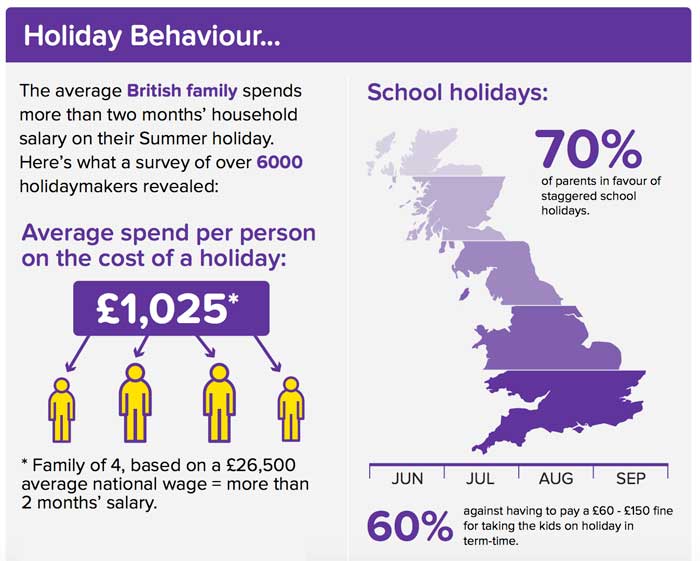 With the value of the pound falling against the euro this summer, Brits on a budget were looking for even more new ways to save during their foreign holiday.

One in six (15 per cent) claimed they will be setting their suitcase aside in favour of smaller cabin bags to avoid expensive baggage charges where possible.

And to save more spending cash at their chosen destination, a quarter of Brits declared that they intended to pre-order their currency, with one in six (15 per cent) vowing to  avoid the temptation of spending on duty free.

The average British family spends more than two months’ household salary on their summer holiday and as Brits prepared to head out  on their summer holiday, a survey of over 6,000 Brits revealed that the average household would spend a whopping £1,025 for each person this summer. This figure equates to more than two months' pay, after tax, for a family of four - based on the average national wage of £26,500. 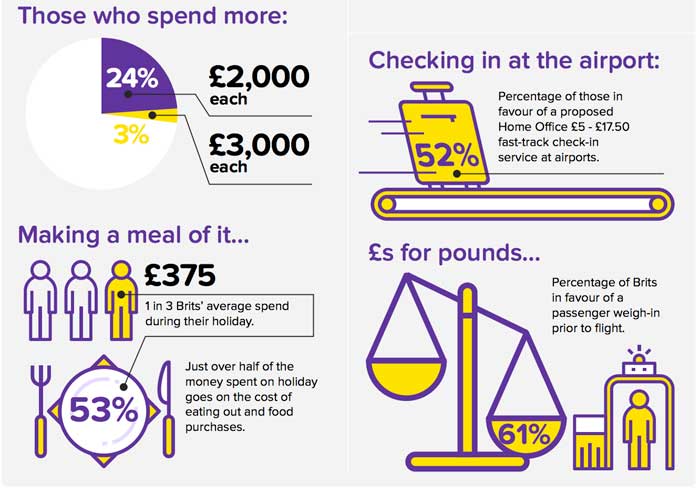 The research also revealed that one in four Brits (24 per cent) is comfortable paying an average of £2,000 each for their summer holiday. And a lucky few (three per cent), are happy to splash out more than £3,000 per person.

On top of the cost of the holiday, a third of Brits (36 per cent) spend an average of £376 while they are on holiday; with the majority of this budget (53 per cent) going towards food.

*Nearly 90% (88%) of British male drivers feel confident about enough to drive safely in snowy and icy conditions - with 12% of these having taken extra training to prepare them for adverse winter conditions. However, British women are less bullish about winter driving with 63% really confident about driving in freezing weather and only 5% having taken any advanced driving lessons.

*Research conducted in the Spring of 2016 revealed that 84% of Brits would recommend taking an older relative’s driving license away if circumstances dictated.

According to the poll of over 1,000 British travellers, 55% would recommend removing the licence of an elderly relative for the safety of others, 18% for their own safety, and 11% would do so if they saw no need for the relative in question to drive.

As always, the question about whether children should be taken out of school to enjoy a cheaper off-peak holiday was as hotly debated in 2016 as in previous years. The Holiday Extras 2016 poll discovered that while 60% would definitely not be prepared to pay a fine (£60 - £120) for taking the kids out of school for a term-time break - 70% of parents were in favour school holidays being staggered by region to cut down on higher peak-time holiday costs for families.

Brits are generally in favour of airlines weighing passengers at check-in with 61% of travellers in agreement.

A quarter of people were in favour for safety reasons and 15 per cent thought that larger people should pay extra at check in - a view that is held predominantly by men. The 39 per cent of people who didn’t agree with check-in weight screening, thought it rude, intrusive and unnecessary. A further 16 per cent thought it was discriminatory. Twenty per cent said they would boycott the airline if they adopted this approach. Conversely, nearly one in ten said the initiative would actively encourage them to use an airline more often.

Concerns for the future of household food brands such as Marmite and Pot Noodle post-Brexit, sparked a poll that revealed the foods that Brits find indispensable holiday.

When asked which British food and drink item they took with them on holiday, nearly half (46 per cent) identified Yorkshire Tea as the ultimate suitcase staple.

Walkers crisps and Kit Kats were second and third choice with 22 per cent and 15 per cent of the votes respectively.

40 per cent voted Mini Cheddars as the number one in-flight snack choice for taking on-board with Jaffa Cakes and,Cornish pasties coming close second and third (14 per cent and 13 per cent).