10 Delicacies You'd Be Brave To Try 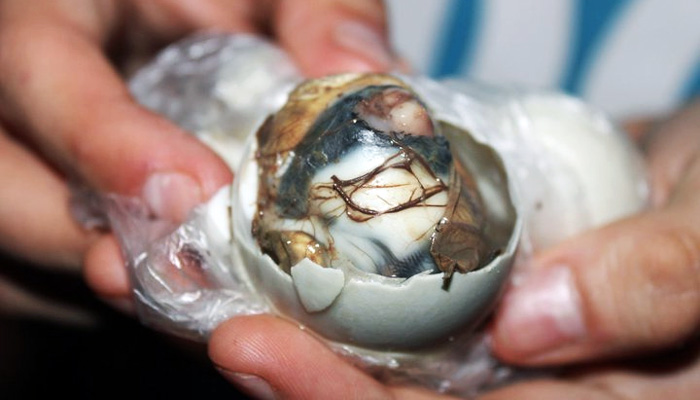 While we are all for stretching the comfort zone and trying new foods, there are some things that even experienced travellers baulk at. Take a look at some of these culinary turn-offs from around the world that we've managed to successfully avoid so far. We'll start with one you've probably heard of...

From South East Asia, this foul smelling fruit is often banned from hotels, buses and other forms of public transport. It's large, covered in thorns and smells even when intact. Whilst some actually love the smell, the majority have compared it to things that vary from rotting flesh to overripe cheese to raw sewage. However, there must be something about this fruit for it to remain so popular. Perhaps its sweet custard-like taste explains why. If you fancy trying this in the UK, some Chinese markets may be able to help you out.

Often found in China, this is an egg (chicken, duck or even quail) which has been preserved in a mixture of ash, quicklime, salt, rice husks and clay. The process can take months at a time and results in a black shell, green sulphuric smelling egg yolk and jelly like egg-white. They can be eaten on their own, as a side dish or are sometimes chopped up and put into porridge.

This is fermented fish in a can that smells so bad you can't eat it in the house. Great for camping trips perhaps? The fermentation is caused by the bacteria Haloanaerobium which creates carbon dioxide and other chemical smells culminating in a sulphuric, rancid smell. A traditional Nordic dish would be Surströmming, boiled potatoes and diced onion. You can also put it in a sandwich.

This hails from both Sardinia and Corsica and is nothing less than cheese made from sheep’s milk that contains live insect larvae from the cheese fly. This makes the cheese start to decompose. As a result, the cheese becomes very runny, and smells and tastes of ammonia. While some people take the larvae out of the cheese before they start to munch, others will eat it whole, wriggling larvae and all.

No, not from Transylvania; this is a delicacy from Vietnam and made out of duck, geese or pig’s blood topped with peanuts and herbs. Yum. It's rich in protein, of course, but not good in an area of the world where bird flu sporadically comes to light. The soup is congealed, kept "fresh" in a fridge and drunk with alcohol. As you would expect, it has a thick consistency and a metallic taste.

Another Southeast Asian invention: this is a duck embryo that has been almost fully developed but then boiled and eaten in the shell. The embryonic fluid broth is drunk from the egg before it is peeled and the chick eaten with salt, lemon juice and ground pepper. The Vietnamese add mint leaves. The delicacy is said to promote virility amongst men.

At last a disgusting food for the vegetarians out there. Corn Smut is maize which has been infected with a disease that causes tumours on the cob. It's a real treat in Mexico! Here it is called Huitlacoche, or Raven’s dung, and takes the form of black spores where the delicate kernels should have been. As well as not looking so great, it can taste very mushroom-like and earthy. You can buy it frozen, or in a can.

These are larvae of ants and often called 'insect caviar'. Another Mexican treat, they are supposed to taste like buttery cottage cheese. The hunt for these larvae is not an easy process as farmers must dig under ant colonies and risk very painful bites. You eat them in tacos, served with guacamole of course.

This is a Norwegian dish and relatively tame compared to some of the above. Still, it's not for everybody as it involves air-dried whitefish cooked with lye. Lye is extremely caustic. It is a blend of potassium hydroxide and sodium hydroxide that we know as drain cleaner. It can cause burns and can eat into the dishes and pans the fish is cooked in and eaten from. We wonder what on earth it is doing to your stomach?