You're on Greek time now. 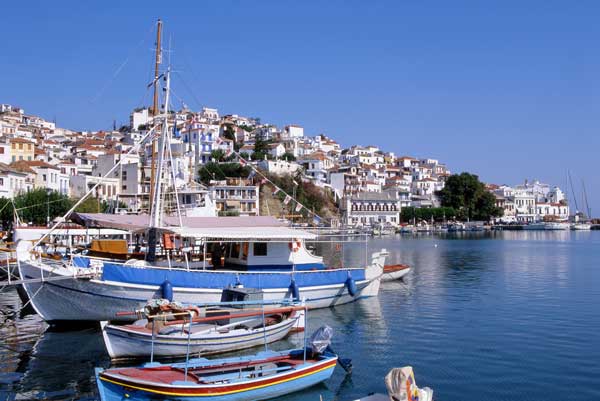 Located to the east of mainland Greece in the western Aegean sea, the Greek island of Skopelos was, according to legend, founded by the son of the god Dionysos. The actual history of the island has seen it come under the leadership of some of civilisations greatest empires. The legacies of such illustrious empires as the ancient Greeks, Romans and Ottomans live on in their remains.

The Traditional Settlement of Outstanding Beauty honour bestowed on the town of Skopelos ensures that any new constructions adhere to strict regulations that ensure the town's traditional appeal. The island of Skopelos also lays claim to being one of the greenest of the Aegean, with a diversity of forestry and flora decorating the rolling landscapes of the island.

The main hub of activity on the island, Skopelos Town exudes tradition and heritage. Here you can discover a destination rich in historic architecture, with many of its 300-plus churches and chapels paying testament to the observation of the Greek Orthodox faith on the island. More modern structures also perfectly complement the historic facades of the town, with the Traditional Settlement of Outstanding Beauty award ensuring that new builds meet traditional criteria.

There are only two legally-protected marine park in Greece - that of the North Sporades and that of Zakynthos. Having been made an official conservation area, the waters around Skopelos are the breeding grounds for monk seals. On a excursion by boat from the harbour, you may have the opportunity to discover for yourself these fascinating creatures, or perhaps witness the increasing numbers of dolphin that frequent the area.

An opportunity to discover some of the finest handiwork to have been created on the island in the 19th and 20th centuries can be seen on a visit to the Skopelos Museum of Folk Art. On display are works that will offer an insight into the lives of families on the island in times past, with examples of agricultural tools, ceramics and paintings transporting you to a simpler era of the island's history.