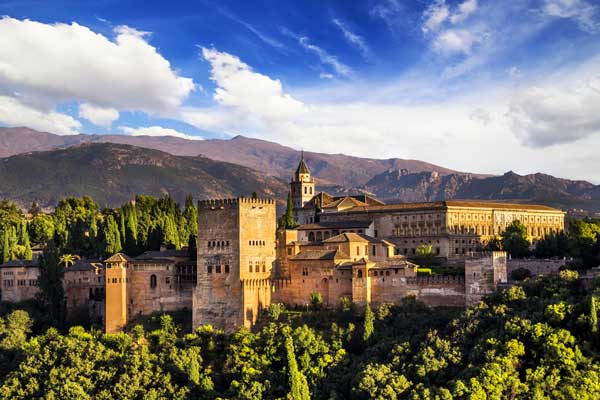 At the foot of the Sierra Nevada mountains in the southern Spanish province of Andalusia, the city of Granada is renowned for its Moorish citadel, the Alhambra Palace, and the presence of the prestigious University of Granada. Granada has been an integral city throughout the course of European history, with the Phoenicians, Carthaginians, Greeks and Romans each establishing a significant presence in the region.

It was, however, the establishment of the emirate of Granada in the 13th century that would see it rise in prominence and political significance in Spain. The influence of the occupying Nasrid emirs on the city has been preserved to this day, with spectacular Moorish architecture exuding Islamic traditions and acting as a major draw to thousands of tourists in search of culture and history.

Undoubtedly the prime attraction for visitors to Granada is the fortress complex of the Alhambra Palace, located atop a hilly terrace in the Albaicin district of the city. Dating from the Nasrid emirate of Granada in the 14th century, the Alhambra - 'red fortress' - was so-called for the red clay used in its construction.

As part of the Alhambra, the spectacular summer palace, known as the Generalife, and its gardens are as compelling and unforgettable as the citadel itself. The gardens on display today date from the mid-20th century and were completed by Francisco Prieto Moreno in a traditional Granadian style.

Also set within the Alhambra is the Renaissance-era palace of Charles V, ruler of the Holy Roman Empire from 1519-1556. The palace boasts grand inner circular patio and was designed by Spanish architect Pedro Machuca, reputedly a pupil of the great master Michelangelo.