The epicentre of Thai life. 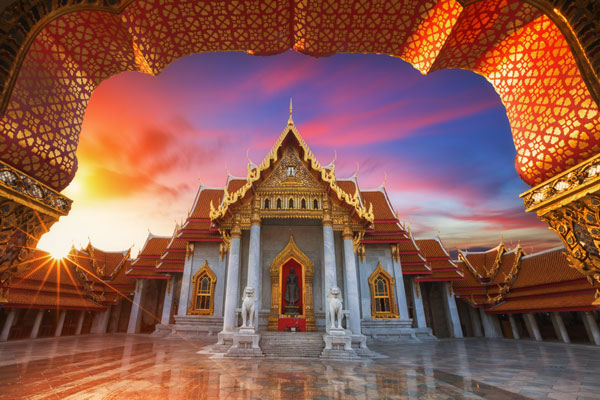 The metropolis of Bangkok continues to beguile all that set foot in the city. Since its establishment as Thailand's capital in the 18th century, Bangkok has been the epicentre of the nation's commercial and political activity, undergoing a transformation from a humble sleepy town on the banks of the Chao Phraya River to one of the world's most exciting destinations.

Behind the modern facade of Bangkok lies a city that has preserved the delicate traditions of its past. Step outside the centre of the city and uncover a series of magnificent Buddhist temples, experience rural life among the friendly and welcoming people, or board a traditional canal boat and enjoy a unique perspective on the city from the water.

No visit to Bangkok is complete without a trip to the Grand Palace - an awe-inspiring complex of buildings that served as the seat of Thai royalty until the mid-20th century. Sitting on the east bank of the Chao Phraya River, the ornate beauty ensures its status as one of the city's foremost attractions.

Damnern Saduak Floating Market has become a must-see attraction for travellers to Thailand. As you drift along the canal's waters, your senses will be bombarded by a plethora of sights, sounds and smells, with the local marketers jostling for position to display their goods.

The former capital of Thailand, Ayutthaya can be found approximately 85 kilometres north of Bangkok. This UNESCO World Heritage Site is home to an array of well-preserved remains that evoke images of the past, with beautiful temples indicative of the kingdom's four centuries of prestige.