Of all the ways to warm up over winter, soaking yourself in the hot springs of Budapest must be the most indulgent. Nicknamed the 'City of Baths', the Hungarian capital boasts a smattering of architectural gems that hide hot pools, saunas and very steamy steam rooms. Believed to cure everything from skin conditions to arthritis, 70 million litres of wonderfully warm, mineral-rich water emerges from underground springs to these thermal baths every day.

A visit to one of the elegant bathhouses across the city is essential, and offers you the perfect way to de-stress after a day spent exploring the capital. Inspire your own heat-seeking adventure by checking out these three thermal baths in Budapest.

The biggest and best-known place for a dip is the Neo-Baroque Szechenyi Baths, which looks more like a royal palace than a pool. The bright yellow tiered building - looking a bit like a wedding cake - celebrated its 100th birthday in 2013. During this time, this century-old bathing Mecca has soothed the aches and pains of millions of visitors in its staggering 18 thermal baths. 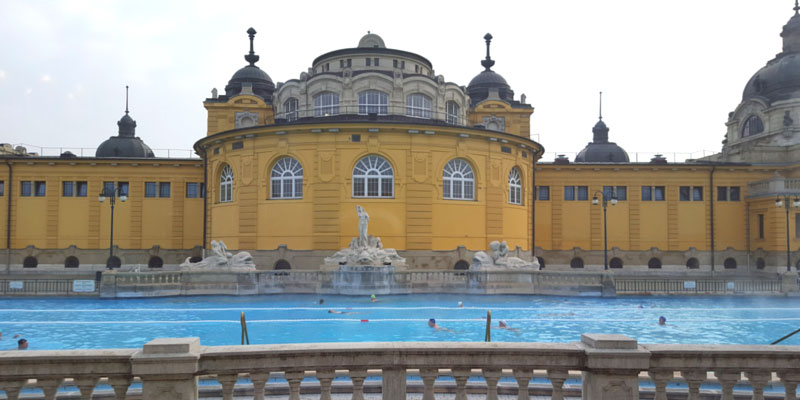 Historically, male and female baths were separate, but changing times mean that most baths - like this one - are now mixed. This means modern bathers dodge a bullet as the former dress code left very little to the imagination. Nowadays, all you need to do is make sure to bring along your bathing suit (or trunks for guys), towel, flip flops and a swimming cap if you want to swim. There is no judgement here, with both young and old enjoying a dip in the wonderful water. 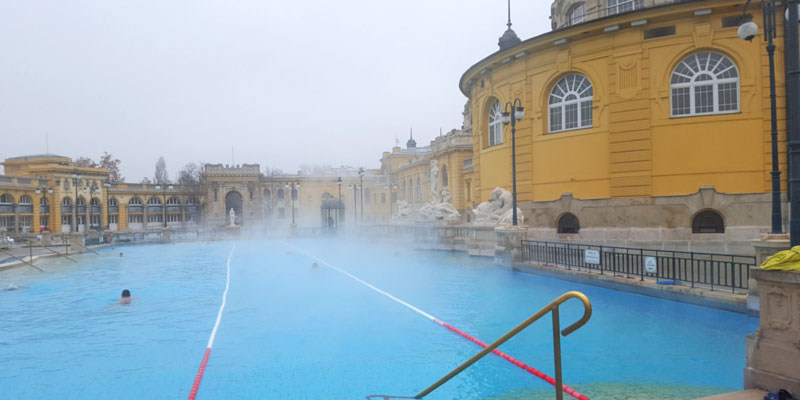 The outdoor pools are where the action happens, with late-night pool parties in the summer and old men playing chess in the rising steam all year round. Apart from the baths, there's every type of treatment you can imagine: mud packs, sauna rooms and massages. Szechenyi is the perfect spot for groups because of its size, but the grand building also makes it a romantic spot for couples. When I asked a local which Budapest bath is a must for visitors, he immediately replied with the Szechenyi Baths - and I can't help but agree. 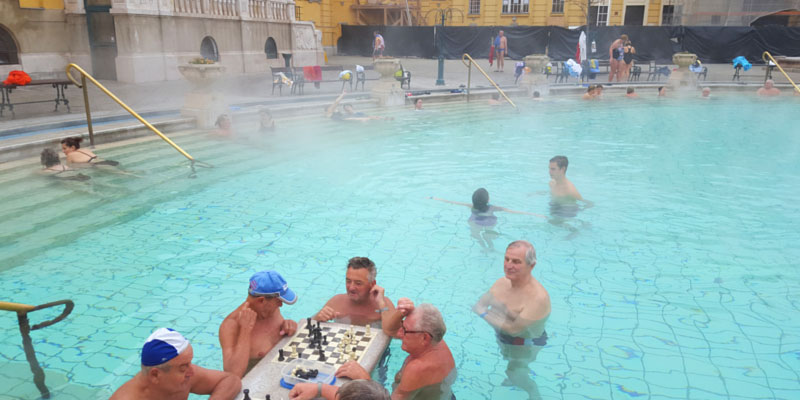 Built way back in 1918, this thermal bath is a quieter alternative to the popular Szechenyi. The historic site, built around a luxury hotel, uses water pumped from the same underground springs as the Knights of St John once used in the 12th Century. While the outdoor wave pool is a big draw in summer, the indoor thermal baths here are exceptional and some of the grandest in the world. Colourful mosaic tiles cover the walls of this Art Nouveau building, with the selection of hot, warm and very hot pools meaning you can easily spend an entire day pampering your body with its invigorating, healing waters. 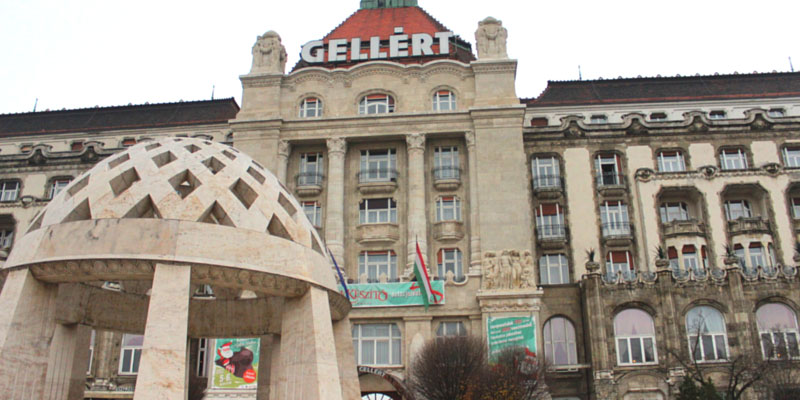 Like Szechenyi and Rudas, you can hire a private cabin here to change in or you can opt for the cheaper option, a communal changing area and a locker. For those looking to spoil themselves, take in a relaxing massage or an indulgent beauty treatment. Remember to bring a bathing cap so that you can swim in the stunning pool under the open skylight too. 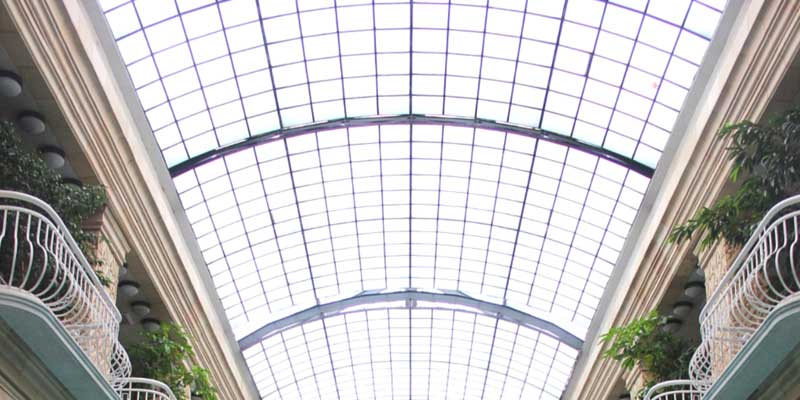 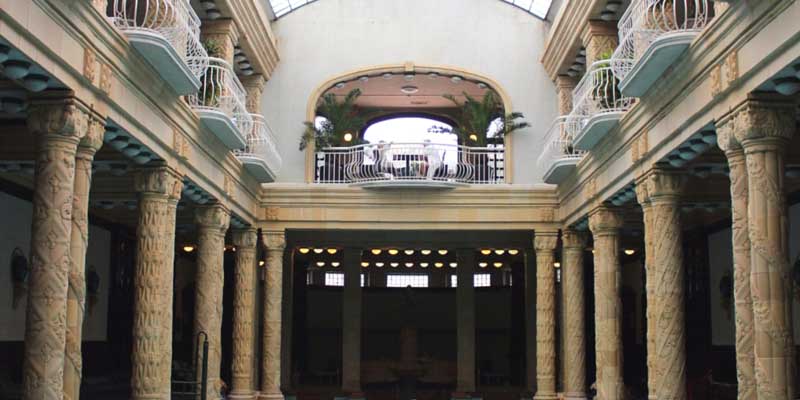 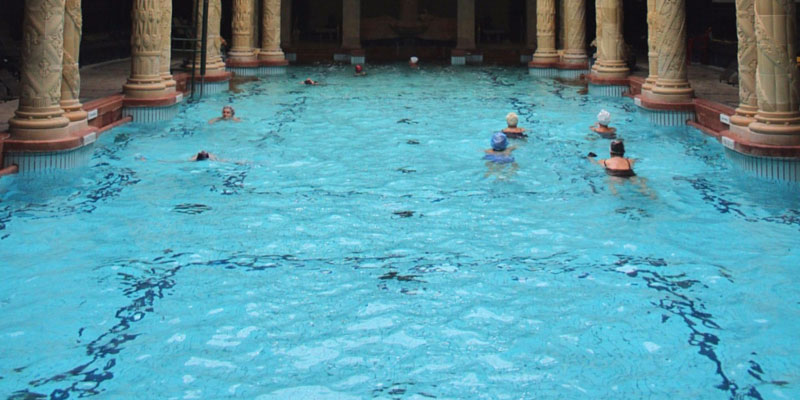 Making up the trio of must-see spas in Budapest, Rudas is one of the city's oldest Turkish spas. Located on the Buda side of the city, this rustic spa has been soothing the bodies of locals since the 16th Century. Despite having a rooftop pool with views of the Danube River, six traditional Turkish baths and a classicalist-style swimming pool, Rudas is still relatively undiscovered by many visitors. Unlike the other spas around the city, however, the swimming pool is not included in your ticket here, so make sure to add this on if you want to get some exercise. Like all the other baths in the city, you'll get an electronic wristband - which is waterproof - so you can leave your stuff safely while you swim. 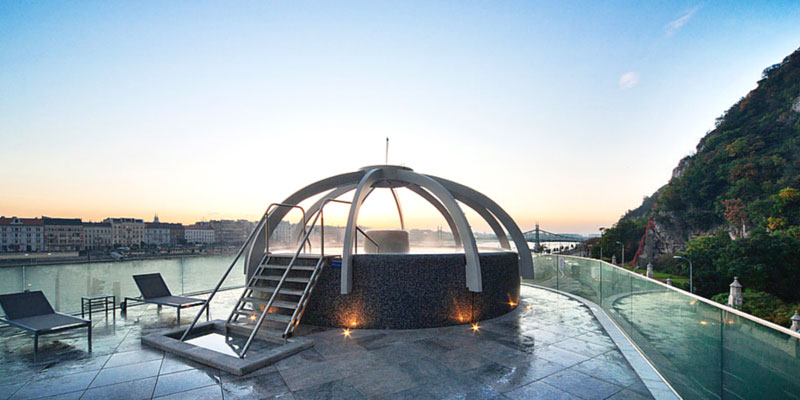 In keeping with its traditional character, the Rudas Spa still has single-sex days during the week, with males and females both allowed to bathe together on weekends. So expect full-on nudity or, at most, a loincloth during the week. 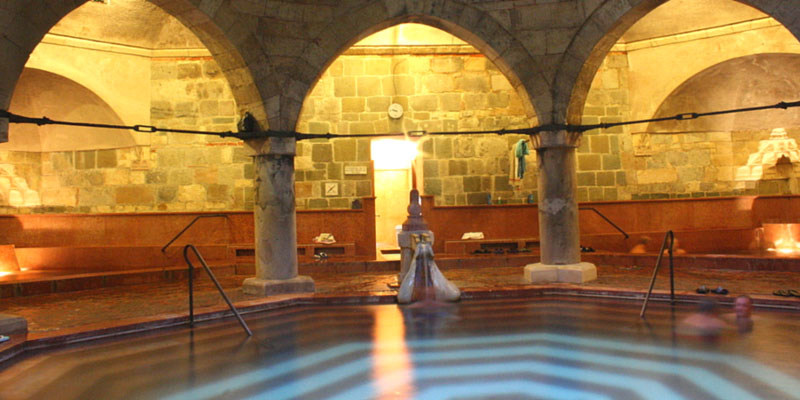 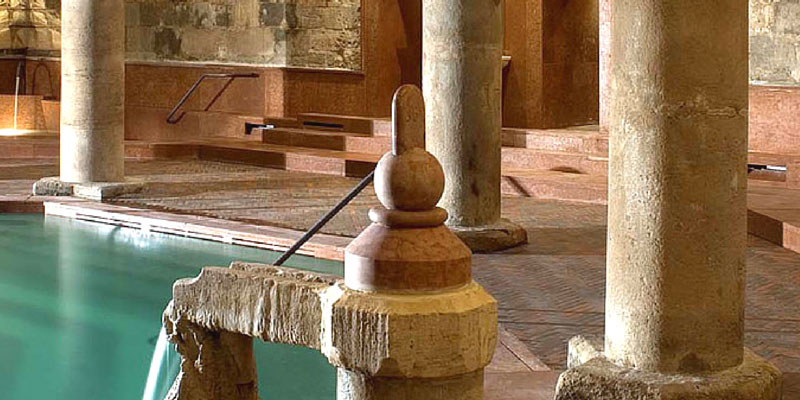 The standout feature of this spa is its gorgeous octagonal pool topped by a 10-metre dome lit up in a kaleidoscope of different-coloured glass panels. This medieval Turkish bath has some of the hottest pools in the city, as well as 45-degree-Celsius steam rooms complete with a bucket of ice cold water to dump over your head when it all gets a bit too much. If you're seeking an authentic experience in a Turkish-style spa rich with history, this is your best option.

Whether you want to get a bit of well-deserved R&R or you simply fancy indulging yourself in a long hot soak, the thermal baths of Budapest are an unmissable sight.

Chris is the editor of the travel blog Make New Tracks. Having written for some of the top travel companies in the UK, he's always on the lookout for lesser travelled destinations, unusual bars and the secret places hidden around the world. Follow him on Twitter here.