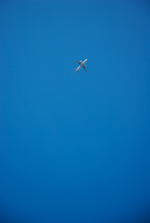 If you're looking for more excitement than flights from your local airport can offer, why not consider a flight into space on the new Virgin Galactic spaceship?

Virgin Galactic has unveiled the design of the space launch system that will launch its commercial space flights. The new White Knight Two (WK2) mothership - or carrier aircraft - is the world's largest, all carbon composite aircraft.

The carrier aircraft is being built by Scaled Composites in California and test flights are expected to start this summer. WK2 has a new high altitude lift capacity and is able to launch Virgin Galactic's SpaceShipTwo and up to 8 astronauts into sub-orbital space flight.

"The designs of both the mothership and the new spaceship are absolutely beautiful and surpass any expectations for the future of commercial spaceflight that we had when first registering the name Virgin Galactic in 1999" says Virgin boss Sir Richard Branson.

Branson has himself completed a space flight training course in preparation for a flight onboard SpaceShipTwo. Already more than 60 Virgin Galactic spaceflight customers have completed the training course and Virgin says it has had around 85,000 registrations from people interested in space flight.

Virgin is working with engine maker Pratt and Whitney to develop a bio-fuel for the PW308A engines that will be powering the new aircraft carrier.