Glasgow Named in Top 10 Cities in the Wolrd 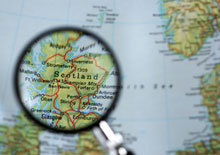 The once grey and grimy city of Glasgow has been named as one of the top 10 cities in the world by influential travel guide Lonely Planet.

Glasgow is the only UK destination among the top 10 cities, which in no particular order comprise Antwerp, Beirut, Chicago, Lisbon, Mexico City, Sao Paulo, Shanghai, Warsaw and Zurich.

The formally decidedly unfashionable city of Glasgow has been chosen because of its exciting, contemporary image says Lonely Planet. "Forget about castles, kilts, bagpipes and tartan - you come to Glasgow for the cocktails, cuisine and designer chic (plus the legendary native wit)," states the new Lonely Planet book, Best in Travel 2009.

The book also cites other factors that add up to making Glasgow the capital of cool including world class designers, snazzy architecture and even the increasingly successful actor James McAvoy.

Lonely Planet travel editor Tom Hall adds: "The time has come for Lonely Planet to let one of its worst kept secrets out: Glasgow's got everything. When we put together Best in Travel 2009 we were looking for the best places to go and things to do in the world right now. We're delighted to highlight such a fun, stylish city".

Best in Travel 2009 aims to capture "the world's hottest travel trends, destinations, journeys and experiences for the year ahead, bringing together the expertise of Lonely Planet authors, staff and travellers," says the publisher.

As well as the top 10 cities in the world, Best in Travel 2009 also identifies 10 regions and countries which travellers should visit next year. Must-see destinations for 2009 include two regions in France, plus areas in China and Chile.

If you're tired of the same old holiday destinations and are looking for somewhere new to visit Lonely Planet's tips are: Languedoc in France, the Basque country in France and Spain, Svalbard in Norway, Bay of Fires in Tasmania, Chiloe in Chile, Nam Ha in Laos, The Big Island Hawaii, San Andres and Providencia in Colombia and Yunnan in China.