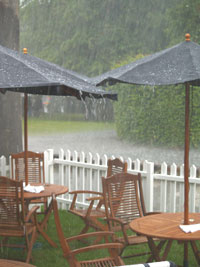 If you're not a fan of the wind whipping round your chops and sand nestling in your ears, you may well be one of the two million Brits expected to flee the country this August Bank Holiday.

After yet another dismal summer, ABTA - the Travel Association - estimates that nearly a million of us will be flying out of the South East alone on Friday and Saturday. Heathrow will say goodbye to over 420,000, Gatwick 260,000, Stansted 160,000 and Luton 80,000.

And at the same time Britain's regional airports will be packed: 160,000 passengers flying out of Manchester, 70,000 from Birmingham, 50,000 from Nottingham East Midlands and 12,000 from Southampton. Across Scotland's three major airports - Edinburgh, Glasgow and Aberdeen - 140,000 sun-starved Scots will be escaping the disappointing late summer holiday.

As if that's not enough, 400,000 British residents will be hot-footing it off this blustery island via Eurotunnel or ferry, with 85,000 sailing through the channel on Eurostar.

Justin Fleming ABTA President said, "The August bank holiday is our traditional goodbye to the summer and is always very busy. This year is no exception with large numbers escaping to guaranteed sunshine, sandy beaches and warm seas."

And where are these hordes heading? According to ABTA, the old favourites like the Balearics, Spain and the Greek Islands are still top dog with British holidaymakers. Turkey, Cyprus and Portugal are also drawing the crowds with city breaks to New York, Amsterdam, Dublin and Rome remaining popular.

Travellers' joy at escaping the last dark days of the British summer might dissolve when they realise that 30 security scanners at Stansted - which is expecting 320,000 passengers over the weekend - are due to strike on Monday causing significant disruption. They're lucky the planned action by baggage handlers and check in staff at Gatwick, Stansted and Manchester was called off just in time.

Eurostar cleaning staff are planning a 24-hour strike on Bank Holiday Monday. And those heading for the capital may be affected by the series of strikes due to hit London Underground next week, expected to cause disruption to the Northern, Jubilee and Piccadilly lines. Happy travels!

Those staying on British soil may be cheered to hear that the Highways Agency has suspended or completed nearly two thirds of all major roadworks on England's motorways and major A roads. They hope that this will ease the pain for UK drivers on one of the busiest weekends of the year for motorists.

The agency's network operations director, Derek Turner said, "There will be a lot of people taking advantage of the late August bank holiday so we expect the roads to the main holiday centres, ports and airports will be busy.

"We are doing everything we can to help drivers with their journeys. We have removed as many roadworks as possible and we also provide a number of information services that will help drivers."

The good old credit crunch seems to be working its magic too, with reports that many motorists are not planning to travel at all over the weekend due to lack of cash and the price of petrol.

So many residents of Great Britain might still enjoy a traditional, strangely comforting Bank Holiday weekend, complete with rain, frustrating DIY projects and thoughts of new shoes, back to school and chilly autumn mornings.

And on the bright side, this weekend's weather forecast features sunny spells, dry patches and a few showers. September has been quite nice in recent years too.