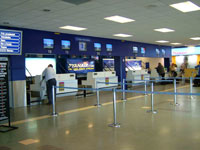 Low cost airline Ryanair has had to cancel 25 return flights to and from Birmingham due to strike action at plane-manufacturer Boeing.

The Boeing strike has delayed the delivery of new aircraft which is affecting Birmingham flights between October 24 and 28. Full details of the services cancelled can be found on Ryanair's website.

“We sincerely regret the forced cancellation of these 25 return services to/from Birmingham. However, we assure passenger that this is a temporary disruption to our schedule and we have secured an aircraft to operate all scheduled services from 29th October.

"We sincerely apologise to all our passengers for the inconvenience caused by this change to our plans. I hope passengers understand that it is due to circumstances over which we have no control and I hope to see these passengers onboard one of our Birmingham services soon. ”

Ryanair is giving all passengers who had booked these flights a full refund.

The Boeing strike began on September 6 after negotiations broke down between the company and workers' union, International Association of Machinists and Aerospace Workers. Nearly 27,000 Boeing employees in Washington, Oregon and Kansas in the United States are thought to be striking.

Boeing is continuing to deliver planes completed before the action started and providing spare parts but is not assembling new planes during the strike.