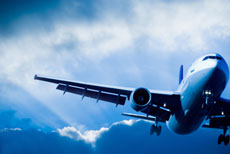 Flights have been cancelled or delayed at UK airports including Heathrow, Gatwick, Bristol and Southampton as the worst storms of the winter batter Britain.

Heathrow airport is advising: “Passengers should check the situation of their flight with their airline before setting out for the airport”. Airline British Airways is recommending that passengers check the status of their flight using its online arrivals and departures system.

Wales and the West country is one of the areas worst hit by the great storm. Ground operations at Bristol airport were suspended between 4am and 6am this morning due to strong winds. This delayed the loading of baggage onto early flights.

“Passengers are now boarding these flights, but delays are expected throughout the morning as a result, with further severe weather forecast,” says Bristol airport on its website. A second severe storm is expected to batter the West country and Wales in mid afternoon.

The storm has also closed the port of Dover this morning. SeaFrance had already announced its services from Dover were suspended due to continuing industrial action in France.

The M20 coast bound between Junctions 8 and 9 in Kent was reopened last night, but Operation Stack seems certain to be implemented again today as lorries queue up waiting for the port of Dover to re-open. Eurotunnel is operating as normal and is expected to be very busy.

Take shelter from the storm; book an Airport Hotel at an unbeatable price with Holiday Extras